The magnetic butler of a gadgets’ world, a small basket of plastic bananas introduces the visitor to the exhibition, going largely unnoticed, hanging on the wall close to a corner like a magnet that has nothing hold. In Basement Roma.’s double exhibition space, Luca De Leva sets up a fragmented universe which veils and disjoints the body of his sister Fiammetta, after whom the exhibition is named. A jagged chimera combining her everydaynesses, affections, and games, Fiammetta speaks from a place that lacks any outfield. Faint and fragmented, her voice recites a Hail Mary from the middle of the room. The recorder that turns on intermittently is clad by a diaphram in the form of an amphora, as archaic as the cave of the Sibyl, as atemporal as Fiammetta, this younger sister born without the sense of time. From the amphora resting on the floor, Fiammetta quickly repeats the words of a ritual  unknown to her: to most, a Hail Mary; to herself, a more familiar “Anna Maria,” her mother’s name, which tells of her only possible body in a sequence of disembodied words – the very prayer she recites. A voice dictating, she asking no questions, answering from a present that knows no anticipation or delay, made of the now and what dwells in its immediate vicinity. 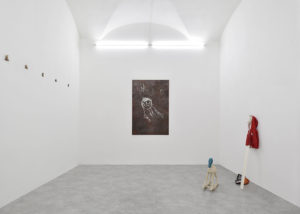 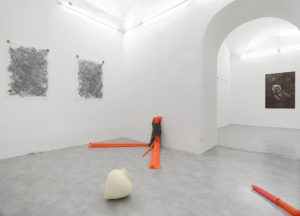 Standing at the entrance, a wooden horse resembles a waterproof dragon. A rocking horse peeks from afar into the black hole of the amphora, through the green lace panties that wrap around its head. At their hooves, the pictures of the little girl riding a carousel, sitting on a beach in a bathing suit, and now being looked at from above by those viewing the exhibition. Hanging on the walls around the amphora which encapsulates and magnifies Fiammetta’s voice, emergency-colored inflatables constitute the partial bodies, waterproof in their own way, of a t-shirt-clad torso, of the body in the bathing suit performing a headstand against the wall, of legs clad in tight pink socks. It is from this forever-younger sister that De Leva seeks answers on the form that has yet to emerge in his drawings, obtaining from the girl replies of a sibillyne, arbitrary candor. The squirrels and dragons that Fiammetta sees running in the spaces left empty in the large frottage works, which her brother creates when awakening, are made visible by the varnish that gives them the perceived body. Kept standing on the wall by the same magnetic animals that look at what is before them with plastic eyes, they respond to Fiammetta’s drawing, which De Leva replicates and enlarges turning it into his own, counterpointing the row of small colored wooden owls that mark the space of what seems to be a temporary, minimalistic children’s garden. What Fiammetta ignores, the gesture retraces – the shape recalls. 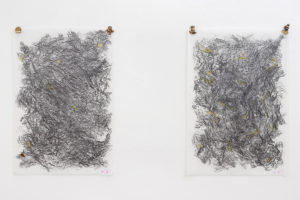 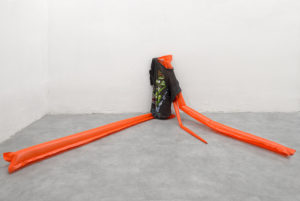