Stay Out Late It Feels Great! 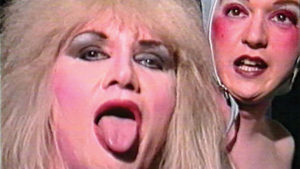 The connective tissue found between these ways of working is a dedication to portraiture. Here, he reflects on his own trajectory from the British underground through the cultural histories of nightlife and how he made the most comprehensive and entertaining club culture film ever seen. Shot between 1990 and 1993 and edited in 2003, Kinky Gerlinky is a 101 minute kaleidoscopic experience that meticulously montages 22 nights of footage from the most glamorous fancy-dress party and drag ball in the history of the West End. This cabaret was frequented by a legion of beautiful people and grotesque queens; a Samba troupe, Amanda Lear, Boy George, Sinéad O’Connor and Leigh Bowery among them, and with catwalk judges like Jean-Paul Gaultier, Naomi Campbell and Vivienne Westwood.

Dick Jewell: In general terms my rapport stems from my well spent youth as a Croydon Mod in South London from the age of 14. Acceptance into this streetwise peer group was founded on attention to detail to your appearance and dress code, which in turn gave you access to nightclubs and venues with soul music for revelry. I went clubbing three nights, minimum, every week, particularly special were Tuesdays when there would always be a live artist from the States at the Orchid Ballroom: Stevie Wonder, Ike and Tina Turner, and Junior Walker. My passion for music and dancing also led me to one of the earliest West Indian sound systems in London, Sir Georgian at The Georgian Club in East Croydon. They adopted me as pretty much their only white member. Buying vinyl all the while led me to opening and DJing in my own club in Brighton when I became an art student down there at 16, so it seems clubbing and music had naturally become a way of life for me beyond merely socialising. In Brighton, I also discovered another ‘dark room,’ the photographic one and I started to wear a 35mm camera. In ’79, having finished a second bout of art college in London, it just felt totally natural to be filming Skins. Whilst having been a Mod, that morphed on to becoming a Suede, I was well aware of the younger brothers of my mates becoming Skins. Now ten years on there was a second wave. My film is about the aspect of youths meeting up and hanging out together, in this instance at The Last Resort in the East End, where they could get cropped, booted and suited. It’s the fundamental of appearance and dress code that bonds your peer group. When I started filming in clubs in the ’70s video wasn’t an option, only large broadcast cameras existed, Super8 was the only viable and affordable option, however the film medium required a lot of light, which inevitably killed the atmosphere of the club, turning filming it into an event in itself. In order to gain a rapport with the dancers, to film at length and over time, I took to projecting film I had shot previously onto a screen above the dance floor prior to recommencing filming. 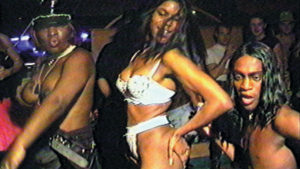 JM: Kinky Gerlinky is an unprecedented moment in nightlife. The crowd was so intersectional. It was queer and straight, white and people of colour and its devotees ranged from celebrities to the working class. What do you think created this diversity and how did you find your way to the party?

DJ: Kinky Gerlinky came about during the Post Punk period when a more anonymous dress-to-sweat acid house party scene was emerging in London and its founders Michael and Gerlinde Costiff wanted to bring glamour back to nightlife in the capital for their wide circle of friends and acquaintances. Initially its appeal and notoriety spread by word of mouth, though increasing popularity meant it moving to larger spaces to accommodate the throng and it ended up in the three thousand capacity, decadent interior of the Empire Ballroom in Leicester Square with Europe’s largest dance floor. It retained a door policy that was not merely based on your outfit but more about your attitude, so only casually dressed hopefuls faced fear of rejection. It grew into an event documented by features in the national newspapers and with international TV crews flocking to the venue to report on the antics. Michael and Gerlinde Costiff had been part of my close circle of friends since the late ’70s and at the time of Kinky Gerlinky, my partner and mother of my son Jack, was the fashion designer Rachel Auburn who was one of the three resident DJs at the club. One night Gerlinde simply said to me, “Dick, you like filming at nightclubs, why not come and film mine?”

JM: How did you choose your mediums when shooting nightlife? For instance Kinky Gerlinky is shot all on video, while Rave+Breaks was shot on Super8. These two mediums bring a very different quality to the editing and resulting images.

DJ: With Kinky, I once again employed lighting, this tactic, as I said before, prevents you from simply recording the club as it becomes an event in itself within the space, resulting in much of what is recorded being directed at the camera. However now armed with video8 and motorcycle battery powered lights, I could shoot all night long. I initially shot and edited Kinky Gerlinky as 22 episodes over the course of three years, releasing each episode between each event. This process enabled the clubbers to watch the shenanigans of the previous event before coming to the next one, which in turn led to them making direct responses to encounters that I’d recorded, leading to my work becoming a sort of living document. I mainly sold my Kinky VHS episodes at World, the shop that Michael and Gerlinde had, where they also sold tickets for the club, and at Boy in Old Compton St. I used to promote them with collaged posters with GET YOUR KINKY VIDEOS HERE written across them. You can still order the Kinky DVD on my website, dickjewell.com The Rave scene was an entirely different beast, pop up locations in the middle of nowhere that you’d only get directions to on the day, with a tribe fuelled by ecstasy, on one groove for the whole night dancing together, but at the same time individually more insular. I wanted to record it as an overall spectacle and capture the laser light shows which were a large part of the event, so I reverted to shooting Super8, as video simply can’t capture lasers without creating unwanted vertical lines through the image. Solely using the available club lighting leads to a fly on the wall viewing experience, though consequently with this constraint, along with the shooting cost, you have to take more time to focus your subject and much of the edit is done in-camera, utilizing short bursts. When it came to my edit of the Rave, I wasn’t a personal fan of the music so I put it to Breakbeats, my musical preference at the time, hence the title Rave+Breaks. I’ve always been glad of this, never more so than when I last projected Rave+Breaks in 2016 at a group show called Unstable Monuments in a large disused industrial space in Truro, Cornwall. The piece not only suited the show in the spirit of the space and the event, but also provided the sound and light for an after party in the space that went on late into the night.

JM: You mentioned to me before that Leigh Bowery was your son’s godfather. How did your kids understand what happened at night at their parents’ parties?

DJ: I only had my son at the time of Kinky Gerlinky and up until that time he had always accompanied me day and night. At one of the early Kinky’s, he was about a year old attached to my chest in a baby harness, someone had actually complained to the management that they didn’t think it was a suitable environment for a baby and I was asked to leave. So as his mum, Rachel was DJing, there I had to make an early exit. On subsequent nights at Kinky when we were both working, we employed a babysitter, Rachel would leave the club earlier on at around 3:00 am, after her set, to go and relieve the sitter and I would carry on, and beyond, shooting there with my crew. I remember one New Year’s Eve when Jack was just turned six, we’d been to five different parties through the night, at which he had ruled the dance floor. We were finally walking back down our Avenue to the flat and he said to me, “Dad I didn’t know you could do this,” and I’d asked, “What do you mean Jack?,” and he’d said “Stay up to the next day.”