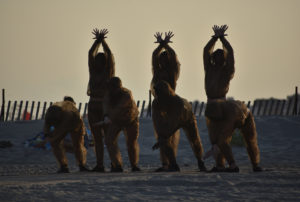 2) How do you address that with the notion of the ‘site’?
The site is another performing body. Each site has its own language and set of laws, norms, weather conditions, etc. I have to address this first before getting to its relationship with space and time.

3) Does the site govern the systems?
For Arena, which was made for Rockaway Beach, the laws of the work attempt to set up an autopoietic system that also stirs up contradictions inherent in the archiving or documentation of ephemeral art forms
• the stage and the dancers move together and establish a symbiotic relationship;
• the choreography becomes notation; movements are determined by the markings left in the sand (rehearsal had to happen on the beach instead of a studio);
• the performance moves counterclockwise, continuously;
• the beach rake truck maintains a steady rate while the choreographic sequences vary in speed—so that the performers end up tailgating the truck and vice versa;
• the tension between the truck and the dancers fluctuates between duet and duel;
• the piece can start at anytime but ends at sunset.

4) What inspires the sequence of movements?
The movement sequences are already embedded within the site. The process involves digging up the pre-existing vocabulary and scaling it to fit the performers.

5) How do you excavate the movement?
Excavation begins with rigorous research into the site’s history, its material/physical composition, the types of labor, maintenance, and performance attributed to its form and its role in the public/private sphere. I try to spend time with people who know the site much better than I ever could, and incorporate their personal narratives, mythologies, and rituals surrounding the site into the work. These interactions also produce a vocabulary of “signature moves,” the unique physical gestures and movements attributed to each person I work with.

6) These are regulated by rules, how do you generate the rule?
Developing the rules always begins with physics. Gravity rules. It’s #1. Then, through research, experimentation, and rehearsal, rules emerge that follow the “site logic” and in turn set something new in motion. Through repetition, these motions/patterns should call into question another set of rules that run in parallel, and are typically overlooked.

7) What is the relationship between movement and rule?
The movement simultaneously demonstrates and denounces the rule. The movement should trip on its own rules and vice versa. And while the movement is always site-specific, it is never performer-specific.

8) What is inside it?
Intention, momentum, and mutation.

9) What is outside it?
Adaptation, evolution, and acceleration.

10) Site-specificity or institutional critique?
Both. But also celebration.

11) Are the bodies an appendage?
Yes. Just as our appendages are also bodies.

12) Of what?
A complex choreographic landscape composed of cultural codes, protocols, operating systems, hidden infrastructure and the bodily unconsciousness—the most epic Rube Goldberg machine ever. Or a better example could be the Eames’ Powers of Ten film, only instead of imagery it’s choreography.

14) Do you think about the power of that machine?
This brings me back to gravity, and the forces (physical, political, cultural) specific to being on Earth right now. 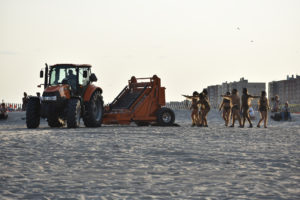 15) What is its propeller?
I don’t think it has propellers. The works use currents that are already in flux and usually facing some state of turmoil. Maybe they function more like a dam or windmill, powered by global crises, cultural contradictions, rising temperatures, entropy, and definitely wind.

16) What do you mean by states of turmoil?
Change and reconfiguration. This happens when the choreography evolves faster than its performers, which is the case every time a new technology is introduced into our everyday routines—our corporeal vocabularies are reconfigured.

17) Does the machine turn over?
Yes. On the human scale this happens when the performers enter their “autopilot” mode, where the choreography is normalized, like walking, and becomes brainless, and the other senses are freed up. Once in this zone the piece can generate new movements and start re-choreographing itself. On the scale of the performance as a whole this “turn over” is subjective—it’s the moment when the viewer experiences the spectacle flip with the quotidian, and the performers become movement. Once de-anthropomorphized, their bodies can be perceived as appendages of the site.

18) Can it be overwhelmed?
No, but it can become very slapstick.

20) Are there dissonances—surges, exaggerations, silences, for instance?
I often think of my works as endurance machines—the looping movement sequences induce real time stress tests where exhaustion and friction become tools that slur, break and sculpt new moves. These movements usually appear as exaggerated and/or abbreviated versions of themselves. This happens regardless of the presence of an audience so performing can feel incredibly silent and still, and then surge back to life the moment a viewer walks in. This can also happen without an audience. Adrenaline is mysterious.

21) Can adrenaline jam the system?
No, it builds it.

22) When does the rational become irrational?
Is complexity ever rational?

23) Let’s go back to question 2: how do you account for, and build-in “time”?
I rarely think of time in my work. Distance, rate and acceleration take precedent and demand the space and duration.

24) Narrative or not?
Narrative.

25) What is the next frontier?
Space exploration and zero gravity ballets.