A transcribed conversation between Simon Denny and Hans Ulrich Obrist 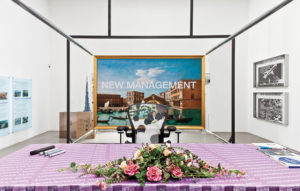 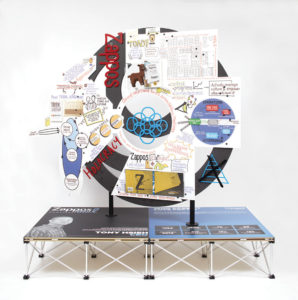 H.U.O. This is an interview on the move. It happens on a flight between Beijing and Hong Kong. In your exhibition at the Serpentine Sackler Gallery, Products for Organising (25 November 2015 – 14 February 2016), you address the concept of holacracy as a shift in power. Can you explain this idea?

S.D. Holacracy is a formalized organizational structure, a management strategy that works within a fully orchestrated management situation but tries to flip the hierarchy upside down. So the hierarchy is no longer a triangle with the boss at the top and the workers at the base, it’s more like a visualization of different intersecting circles with people acting in different roles and contributing to governance. It acts to redistribute power across the organization and enable people as if they were all entrepreneurs.

H.U.O. On the cover of your Serpentine exhibition catalogue, Products for Organising, there is the word ‘holacracy.’ What exactly is holacracy? How would you define it, how does it differentiate itself from anarchy and to which extent is it a ‘nest of circles’?

S.D. Holacracy is visualized as a nest of interlocking circles. Instead of job descriptions people have roles, acting within circles of people instead of teams. Brian J. Robertson, the founder of holacracy, describes in his book the experience of driving an airplane. Everything on the airplane, all the signals in the cockpit were telling him that everything was okay, except one flashing light. He thought it was an insignificant flashing light so he ignored it, but actually it was telling him that he was about to crash. That instance inspired the idea of holacracy, which gives everybody within an organization the power to make a decision provided they have the necessary knowledge. This concept works both within a shoe store company like the Amazon-owned Zappos, and the GCHQ, the British version of the NSA. So there’s a public sector, a private sector, a sales force and a security agency all working with the distributed authority model.

H.U.O. We could say holacracy is everywhere.

S.D. Holacracy is everywhere and the idea of redistributing power within organizations is very powerful right now.

H.U.O. In this sense also ownership becomes more horizontal. It is a kind of Genossenschaft (cooperative), like Migros, a famous supermarket in Switzerland which belongs to everyone. It belongs to the people.

H.U.O. Can we speak of a Genossenschaft model?

S.D. I think it’s an attempt to take a Genossenschaft model and apply it to a wide range of organizations. The Zappos CEO, Tony Hsieh, is actively using this culture across his organization, from the way it looks and the way the office is designed to the way people interact within a small space at work. This all comes together to make a holacratic organization possible.

H.U.O. I would like to also ask you about the notion of ‘agile.’ How would you define ‘agile’?

S.D. ‘Agile’ is a management process that prioritises radical flexibility within organizations. It grew out of a very successful software development process and now is applied to everything from people’s private lives to furniture.

H.U.O. The word ‘agile’ appears on many of your sculptures and it also informs the exhibition’s floor plan. It’s an agile floor plan, it’s part of the architecture. How is the notion of ‘agile’ connected to holacracy? Can you tell us more about the agile age of holacracy?

S.D.  ‘Agile’ aims at the foundation of another new managerial trend, deriving from programming languages. If ‘holacracy’ can be seen as an operating system applied to an organization, the notion of ‘agile’ is focused on keeping space, people and processes flexible. This idea drives an organization that can change very quickly and can expand out into an office environment which can be expressed physically.The ‘agile’ space has been theorized and implemented within Zappos and GCHQ. It’s a sort of operating system and computer metaphor which is realized within these modern tech institutions.

H.U.O. One of the key principles of the notion of ‘agile’ is to prioritize “responding to change over following a plan.”

S.D.  Exactly. The notion of ‘agile’ is the perfect framework for responding to change. It’s interesting that this idea comes from a programming context but it’s used both within commercial organizations and public institutions.

H.U.O. It is worth considering horizontal management structures in relation to ‘agile;’ fluidity and the notion of power as something fluid. Can you speak about this idea of fluid power in relation to your work?

S.D. I’m always interested in seeing how fluid power can manifest itself visually. I try to focus on those who have distilled this idea into images and diagrams.

H.U.O. Paul Klee said that “art makes the invisible visible.” That’s very much true for you because you basically make these invisible powers visible. You create visualizations of holacracy, of the notion of the ‘agile’ and of this new invisible power, like in the project about Kim Dotcom. Can you describe this project?

S.D. Absolutely. When the U.S. Government arrested Kim for activities linked to megaupload.com, seizing some of his possessions, they effectively made a curatorial selection. For me that presented a wonderful visualization of a certain argument about privacy, ownership and sovereignty. I brought those things together as an exhibition, as a show, visualizing the debate about who owns what, who has access to what and how we can see it.

H.U.O. In an interview we did together in the framework of the Digital-Life-Design Conference, held in 2015 in Munich, you told me that technology displaces experience, space and even time. So in a way it also displaces power. This idea of power, visibility and displacement was strongly involved in an artwork you made about the technology company Samsung, called New Management. The work dealt with the philosophy behind its management strategy.

S.D. Technology can enable the displacement of power, obscure the structures of power or contribute to reconfiguring the structures of power. The New Management exhibition that I did at Portikus focused upon the world of Lee Kun-Hee, the powerful chairman of Samsung. Samsung took a reproduction of a Canaletto painting that was hanging in a private corporate meeting room in Frankfurt and made it a part of a monument for change, for expansion and for global ambition. I surreptitiously remade that monument which can only be viewed by people within Samsung. I wanted to make such an important cultural monument more accessible to the rest of the world.

H.U.O. New Management looked at Samsung’s management strategy and what is known as the “Frankfurt Declaration” of 1993. How we might connect it to this dialectic of the visibility and invisibility of power?

S.D. I think that this (to people outside Samsung) invisible monument can show how carefully controlled and selectively presented a display of managerial power can be.

H.U.O. I would like to speak to you about how the media has historically shaped political discourse by taking a look at your project for the New Zealand Pavilion at the 56th Venice Biennale, situated at the Marciana Library and Marco Polo Airport, and entitled Secret Power.

S.D. The project was inspired by the famous New Zealand journalist Nicky Hager’s book Secret Power, and by the Snowden releases and the visual language which accompanied the slides he leaked. I wanted to imagine an artistic figure, an authorial figure for those slide drawings and for the illustrations that the NSA uses to embody and visualize surveillance and power. After some research, I found David Darchicourt’s LinkedIn profile, promoting himself as the person who used to be in charge of making all those drawings. I translated his images and put them into giant customized vitrines, contrasting them with images of artists who made the value of knowledge visible in Venetian times, such as Titian, Veronese and Sansovino, who designed the Marciana library. I contrasted David Darchicourt’s work — copied from his Behance profile – with the Old Masters’, trying to imagine a historical lineage for the visualization of intelligence.

H.U.O. With his agreement?—Tell us more about this multi-layered project and about some of the stories of power displayed in the vitrines.

S.D. No, without his agreement. Though I commissioned him to do some new work for the exhibition via my designer friend David Bennewith, including a new map from him and also a lizard in the style of some work that he had made before the NSA. We then contrasted the new commissioned pieces along with artwork from his portfolios with drawings taken from the Snowden slides. Then Charlotte Higgins from The Guardian came and had a look at the exhibition and contacted David Darchicourt to tell him he was the star of the show and was compared to Titian, Veronese and Fra Mauro, and being reimagined as a contemporary artist. What was really interesting was the resonance between the stories of power told by the Renaissance painters and the newer imagery from the NSA: both often featured these magicians, these bearded wise men. On the one hand there were these old depictions of philosophers in Renaissance paintings and, on the other, in the NSA drawings there were these game-like, fantasy-like cartoons that derived from the magic card context and other types of contemporary card gaming. There were also depictions of contemporary magicians, like Teller from Penn & Teller, and the CryptoKids, which are cartoon characters, anthropomorphic animals which stand in for the role of different workers in the NSA. Fantastic animals in the paintings on the ceiling and the celestial globes of Coronelli had a resonance with some of these more cartoony, more illustrative diagrams by David Darchicourt.

H.U.O. I was wondering to what extent your exhibition at MoMA PS1—The Innovator’s Dilemma, held earlier this year—connects to the question of power, or non-power. Can technology help us to look at and unlock the concentration of power and wealth in the world and is data the new currency of power. Indeed, do those who hold the greatest amount of data hold the greatest power?

S.D. I think you could definitely make that argument. I think who owns data centres and who has access to them is key to geopolitical power at the moment. The show at PS1 looked at how commercial or tech organizations present themselves to the world and at the language and imagery they use. It looked at lots of different projects and brought them together in a pseudo trade fair. So I had a trade fair booth for each show bringing together the different ways in which particular organizations communicate themselves to the world.

H.U.O. My final question to you is the only recurring question I ask everyone I interview and it’s about an unrealized project. 2015 was such an extraordinary year for you with so many realized projects, the Venice Biennale, the MoMA PS1 and the Serpentine shows. What remains unrealized? What are the unbuilt roads of Simon Denny?

S.D. Secret projects. I want to make… no actually, I think we can leave it there for now.

A TRANSCRIBED CONVERSATION BETWEEN SIMON DENNY AND HANS ULRICH OBRIST