An Aesthetic of the Possible

A frozen kitchen in which salt crystals invade the objects (Bianca Bondi); white masses that sweat (Isabelle Andriessen); hanging carbonized forms that seep onto the floor (Agata Ingarden): recently, one increasingly finds representations of spaces that are deserted, as if left to themselves, their life continuing in silence. If they echo fears of mass extinction, they are also representations of the possible.

In a contracting world, resistance plays out in corners that have to be pressed in. Finding the potentialities of the future in the past and present has always been a strong aspiration. But today, the task is becoming complicated: which representations would keep the promises of a consciousness of the Anthropocene? How can one decenter human beings, give them a less hegemonic place, and give voice to other beings that are more hybrid, perhaps more precarious? In observing the work of Bianca Bondi, Isabelle Andriessen, Dora Budor, Grégory Chatonsky, Rochelle Goldberg, Ian Cheng, Pierre Huyghe, Agata Ingarden, Laure Vigna and others, the lines of force become apparent: the work must be able to generate possibilities. 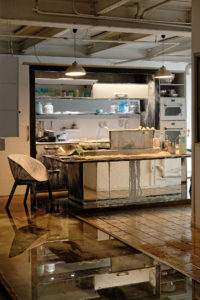 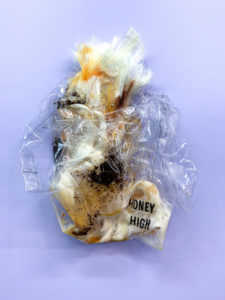 An aesthetic of the possible first suggests a dynamic work. Unlike the static object, the work is temporal, and has a vitality that can dwell below that of an organism. In the project Perfect Skin XI (2020), Grégory Chatonsky shows cancerous cell mutations created by artificial intelligence. In Ivory Dampers (2019) by Isabelle Andriessen, iron sulphate is absorbed and transformed by ceramics. The material is no longer a fixed mass that the human hand changes at leisure, but an infinitely complex whole that the artist learns to know in order to negotiate its changes.

Introducing vitality into the work has immediate consequences: it enters into symbiosis with its environment. In No Where, Now Here (2016), the chia seeds that form the bed of Rochelle Goldberg’s sculptures attract insects that become an integral part of the work. With The Sacred Spring and Necessary Reservoirs (2019) by Bianca Bondi, temperature is a crucial element of the development of the work. One also thinks of Pierre Huyghe’s microcosms (After ALife Ahead, Untilled), in which rain, bees and ants are part of a chain of reactions assembled by the artist. 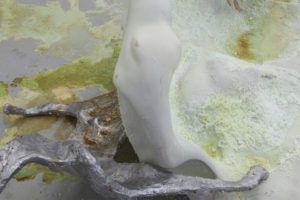 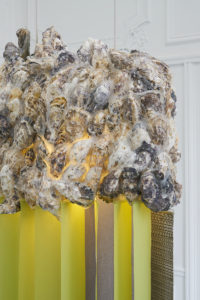 Ian Cheng, Emissary in the Squat of Gods, 2015 Courtesy: the artist and Pilar Corrias, London

Feedback
The invisibilized museum population enters into the work: everything that had been separated from it by the hermetic white walls returns, and forms a cycle with it. The feedback loop, a temporal phenomenon that explains global warming, becomes an artistic motif. Thought that is modern, linear (time is chronological) and separatist (distinction of humans from nonhumans) has purged the world of chain reactions in which dispersed elements were linked by the same phenomenon. But the world is populated by hybrids: the coronavirus is provoking reactions in ecology, culture, politics, medicine, education, etc. It is analyzed as a total fact that disciplines translate into their language. It is a singular thing that circulates and is incarnated in different forms.

Likewise, Dora Budor shows us that the small volcanic eruptions of the series Origin (2019) are linked to construction works a few meters from the exhibition site. With the motif of the color pink in Untilled (2011-2012), Pierre Huyghe shows that a dog, a bench, water, and a flower could be linked by one same phenomenon. To get out of modern impasses, we have no choice but to conceive of the world as chains of translation.[1] The work is no longer alone. 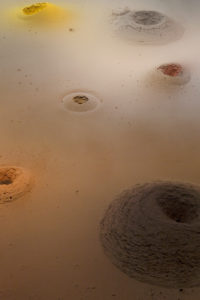 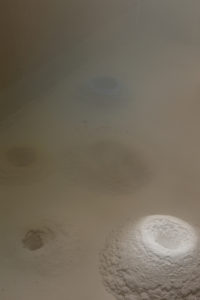 The work by itself
It is not by chance that a ghostly atmosphere emanates from the pieces: in the process of showing what had been pushed away, low-intensity life forms appear. The works sweat, change imperceptibly. Nicolas Bourriaud and Ruba Katrib will speak of molecular sculpture:[2] the life of cells and the development of crystals are movements that the artist endeavors to present.

In this muted, nearly indiscernible life, movements abound in possibilities. More precisely, they oscillate between determination and contingency. Like relations between the living, the works show aspects of the possible to different degrees, ranging from the highest (contingency) to the lowest (determination). For example, if the temperature lowers in the room, Laure Vigna’s piece Impossible Also to Resist an Extraordinary Impulse to Go Away on All Sides (2018) is forced to condense. The simulation Emissary in the Squat of Gods (2015) by Ian Cheng starts with a contingent event, the eruption of a volcano, so that hundreds of planned elements develop. Everything hinges on the preparation of conditions so that the elements then test their potential.

The more elements there are in the chain, the more possible results. The artist is therefore decentered from a system that he or she implements, and that then self-generates. Mallarmé’s[3] romantic dreams of self-generation have almost been attained. For that, a work had to be conceived as a set of relations instead of an accumulation of masses or mechanical links. Leaving the work by itself, decentering oneself from it, means observing how possibles get created. This is why the speculative tendencies of some contemporary philosophies (speculative realism, object-oriented philosophy) exerted such a strong attraction on the art field a decade ago: to nonhumans they promised potentialities that had long been pushed away. 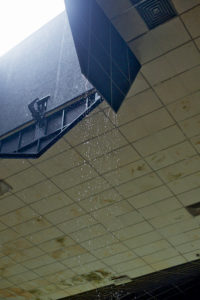 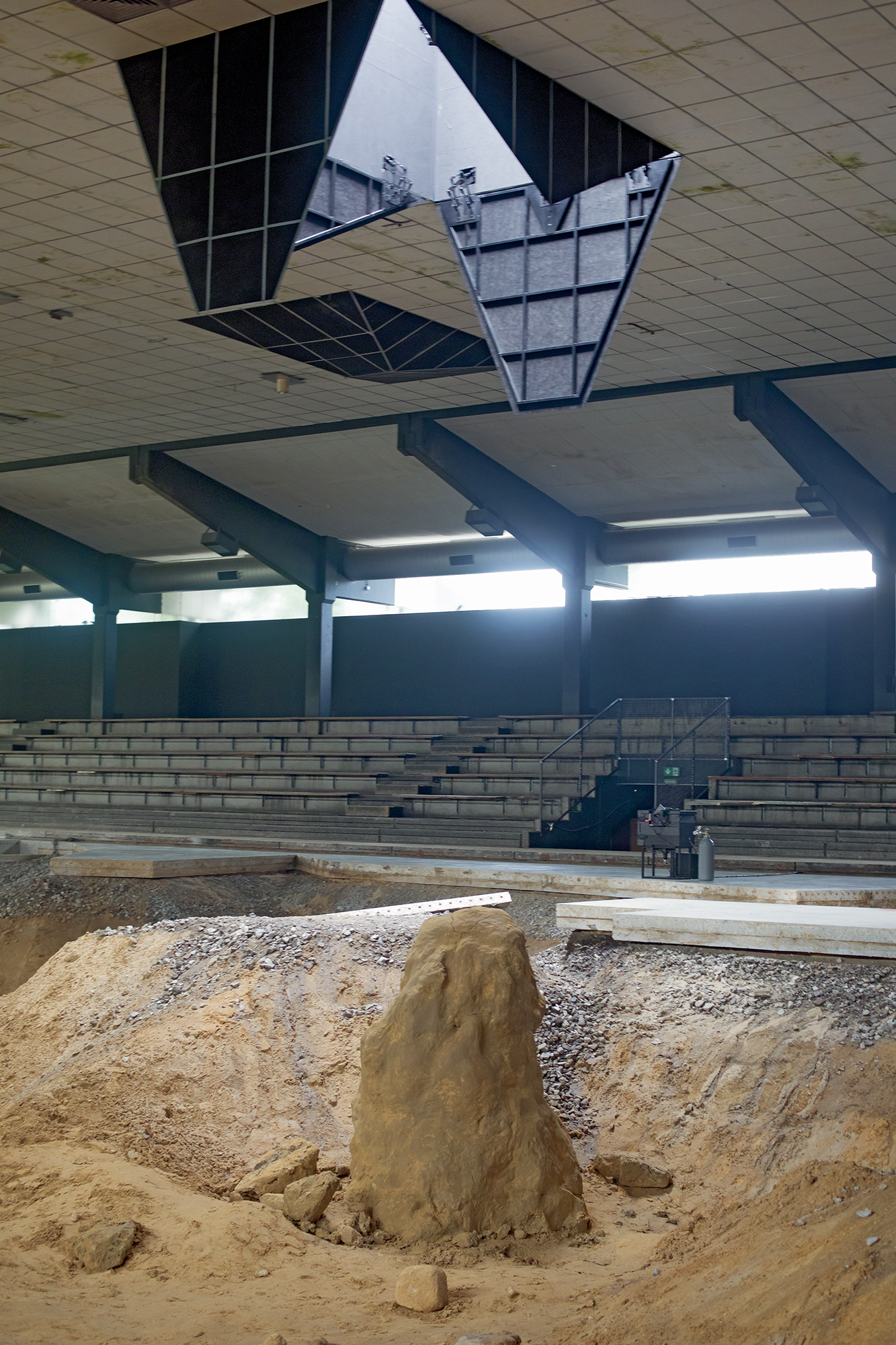 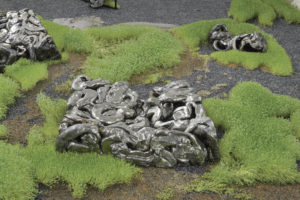 Histories: Materialisms, systems
The history of modern art has seen similar forms come into being: formlessness, matterism and Land Art offered works in which the dynamism of the material was foremost. Contingent (1969) by Eva Hesse showed pieces of latex and muslin that developed in a contingent way. Entropy was a process of disorder sought by Robert Smithson, finding its most iconic expression in Spiral Jetty (1970). In the catalogue L’informe: mode d’emploi,[4] Yve-Alain Bois and Rosalind Krauss named this tendency base materialism, borrowing George Bataille’s term. Going against idealism, it designates a matter never absorbed by the idea or form, without any subject, structure or history.[5] But for Krauss and Bois, formlessness is primarily understood within a postmodern dynamic in which the aim is to represent the end of the great narratives, the lack of meaning, and the abyssal void in which the human being has plunged. Mirroring humans, the analysis was always anthropocentric.

In the 1970s, the experiments of E.A.T.,[6] accompanied by system aesthetics,[7] found less anthropocentric representations that gave room to light, wind, vibrations (Hans Haacke, Michael Asher, Robert Rauschenberg, John Cage) and other components, where the work is considered within a set of relations with the environment. It was the time of cybernetics, of a non-organic life of things that subsequently inspired the complex systems of Pierre Huyghe and the artificial simulations of Grégory Chatonsky.

Generating possibilities
An aesthetic of the possible moves the work away from reception problems in order to concentrate on its movements. It will not be so much a matter of understanding in what sense the piece is beautiful, sublime or a vehicle of ideas, but rather how it is generative of forms. How did the skin change in Perfect Skin XI? How did the colors of Ivory Dampers develop?

Seeing the work as a chain of relations echoes the anthropologies of relation developed by Philippe Descola and Anna Tsing, the hybrid philosophies of Donna Haraway, Baptiste Morizot and Emanuele Coccia, the metaphysics of Tristan Garcia: each approach moves away from a naturalist vision (nature is the unified field of the nonhuman, and the human is an exception) and never considers an entity alone, but always within a field of relations, an environment that retroacts.

Getting away from “the objectivization of the world and of others”[8] proceeds by means of representations that are less stable and unified, more precarious. The works that generate possible populate a low-intensity world. But one must not be mistaken about it, mass extinction does not concern all life on earth, just some of the living beings. As James Lovelock explains in Gaia: A New Look at Life on Earth,[9] life is a force that very few speculative scenarios can get the better of. The forms of the possible can help us listen to it.

With other artists like Lucio Fontana, Robert Rauschenberg, Alberto Burri.

FLORA KATZ is an art critic, curator, and Ph.D. student at Université Paris 1 La Sorbonne. Her research is dedicated to French artist Pierre Huyghe. She was a resident at Fondation Luma in 2020. Her next exhibition, Life to Itself, will take place at CIAP Vassivière (France) in 2021.