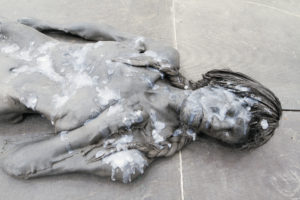 “The forms are many in which the unchanging seeks relief from its formlessness.”
Malone in Malone Dies, Samuel Beckett, 1951

In The Literature of Silence,1 Ihab Hassan analyzes Beckett’s exploitation of jest, saying: “The jest, as comedy often requires, calls attention to the carnal nature of man; and it transposes moral into physical concerns. In the end however, it stresses the absurd isolation of all human concerns. Because Beckett’s humor is reductive and sadistic, it tends to focus on scatological rather than erotic functions. Copulation, therefore, thrives, but feebly, usually among cripples or octogenarians, as further proof of the mind’s disgust with life.” Andra Ursuta’s sculptures could have been Beckett characters. Devoid of any romanticized attributes, they usually appear as violent, disturbing and sometimes compellingly realistic depictions of the failures and inadequacies of our human condition. Just as Beckett characters, as outlined by Barbara Ashwood,2 are flat and very literal projections of the shortcomings and perversions of human beings, Ursuta doesn’t clutter up with any superego decorum, striking right into issues as varied as individual desperation, masculine domination, power demise, familial dysfunction or other rank yet realistic component of our being. Beckett’s aforementioned Malone Dies is described by Ashwood as “the satire of a man who tries to bear his own company,” which can precisely apply to Ursuta’s subject matters within her polymorphous practice. “Traditionally, art has been understood as a practice that reinforces hegemonies, stating: ‘this is who we are,’” she says in conversation about her work. “Then modernism opened up the possibility for an art that says the opposite, ‘we don’t know what we are.’ My work probes the extreme reaches of this category: because we don’t know what we are, we can be anything, and we are all capable of awful things.”

Andra Ursuta was born in 1979 in Salonta, a Romanian town near the Hungarian frontier known for being the site of the country’s biggest salami factory. She grew up under the Ceauşescu repressive regime, within an environment that combined secular superstition with a pretty fervent interpretation of the Bible. Although her practice is gradually moving away from autobiographical content, her early body of work was certainly dredged up from shady childhood memories as well as uncanny Central European imagery. For the 2012 Venice Biennale international exhibition The Encyclopedic Palace, curated by Massimiliano Gioni, Ursuta recreated, in involute detail, the barely furnished spaces of her Transylvanian childhood home, neighboring a slaughter house and recently replaced by an Austrian supermarket chain. Kitchen, Nutria Room, Pantry, and Sleeping Room are miniature replicas inspired by a previous work, T. Vladimirescu N. 5, An International Psychic Maneuver (2007-2010), that she made when the house was still standing. Unsettlingly realistic, these anti-dollhouses lack the nostalgic elements that would mask and gloss over the artist’s pretty dark past, instead bringing the inadequacies she grew up into to the forefront as a way to ward off a haunting history. “I think I have devoted enough time to my past,” she says. “Whatever ‘foreignness’ I still have going on is more of a useful lens through which to look at the world.”

Although she just became an American citizen after living in New York for almost twenty years, Ursuta kept some kind of disquieting strangeness that transpires through – and informs – her production, as well as a refreshing distance towards her position within the art sphere. All quick wit and dark humor, she is quite a singular and opinionated character who rarely leaves her Long Island Studio – she calls it “a magical place” –, who loathes the art world’s ersatz of social life and dreams of building her own concrete fortress in the Carpathian mountains. “I think art is pretty useless, but this is also why it’s valuable,” she notes, in typical clear-headed Ursuta mode. In 2011 she smashed a babushka-like avatar of herself on the floor for her exhibition Vandal Lust, a loosely paraphrased version of The Man Who Flew into Space from His Apartment by Kabakov. The work consisted of a homemade trebuchet meant to throw a body – hers presumably – into space. The throw is unsuccessful; the body hits a wall and lies flattened on the ground as an allegory for the artist’s trajectory through the small path that exists between self-realization and destruction within the art world. In 2012, she shattered the front window of Ramiken Crucible gallery for her critically lauded show Magical Terrorism. In 2013, she built something of an art cemetery on Randall’s Island for Frieze Projects (Zombie 1-6). Roberta Smith defined her practice in The New York Times as “a bit of institutional critique worthy of Michael Asher.” “Being a contemporary artist is slightly embarrassing and my work reflects this embarrassment,” retorts Ursuta. 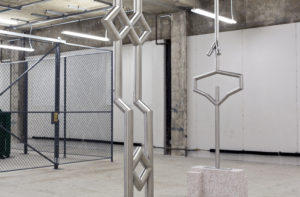 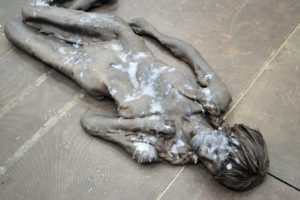 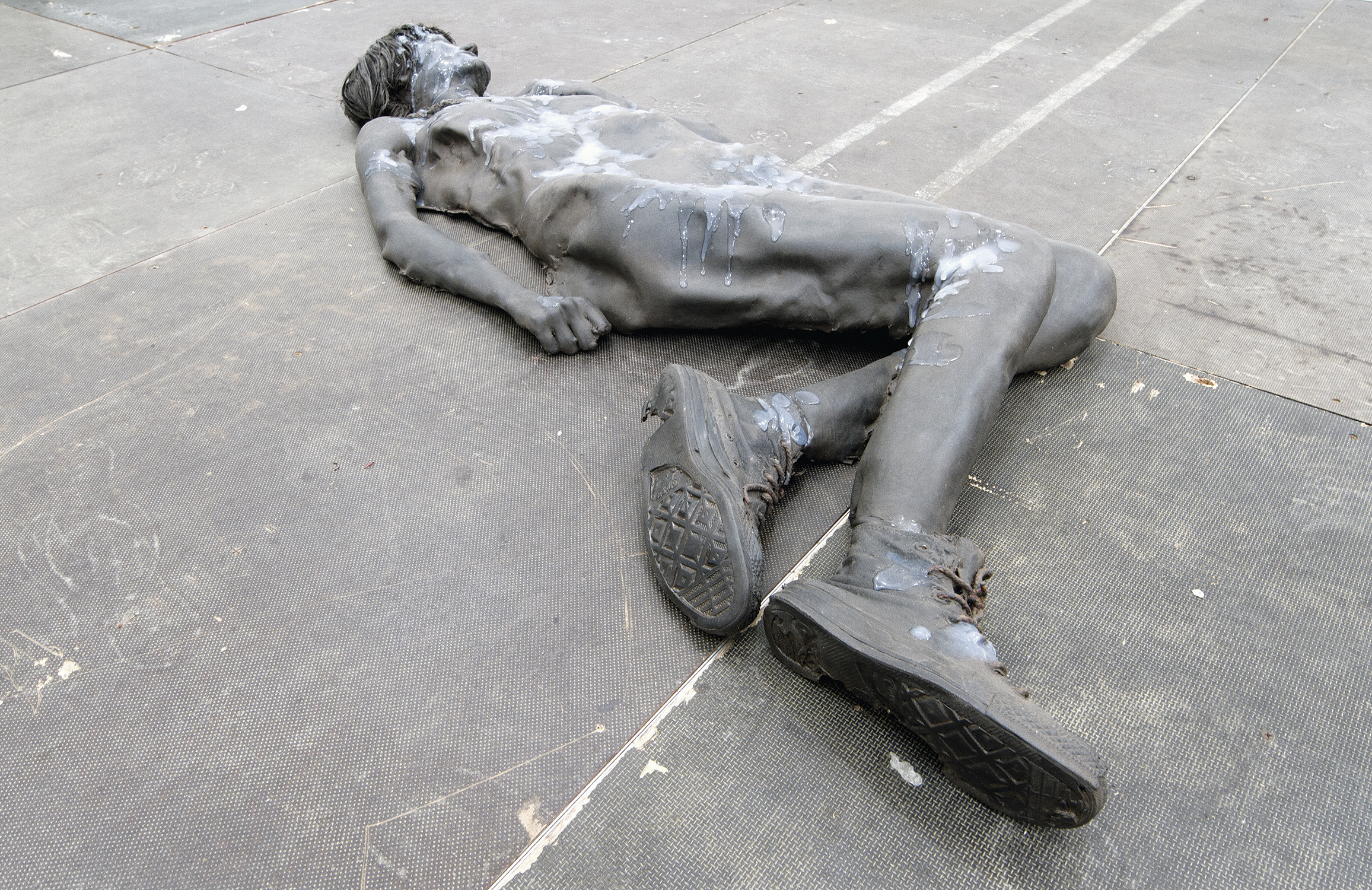 Finding much of her inspiration in news stories and in material she looks up on the Internet, Ursuta digs into language ambiguities, mundane situations or imaginary logistical problems to actually make objects, in an attempt to grasp a world completely coated in many layers of nonsense. “How to commit suicide and make the body disappear” (Breath Hold (Discipline and Vanish), 2010); “How would a machine for stoning work?” (Stoner, 2013); her web history probably resembles one of a deeply disquieted and suspect individual. “These are usually awful problems to solve, but making them into art works allows me to deal with their horror.” For Stoner for instance – a work consisting of a baseball-pitching machine modified to hurl stones at two large walls covered with cracked tiles in the color of bruised flesh and encrusted with human hair and filth – the artist perversely hijacks an accessory of sports and leisure for a fanatical and misanthropic end; several of her works have to do with absurd apocalyptic fears that she melts into today’s fascination for multi-function objects. In this sense, Scythe (2014) – a hybrid tool half-bike half-scythe – is a piece of technology, just like Stoner or Breath Hold (Discipline and Vanish) or even Natural Born Artist (2012) – a swing that allows to projectile shit on everything. These are objects Ursuta uses to taunt the technologies of everyday life that she considers just as absurd and psychotic than the fictions she implies in her practice. Some works come from more personal memories. Floor Lickers (2014) turns to an injunction she would hear as a child “clean this or I’ll make you clean it with your tongue;” the sculpture becomes a physical epitome of (female) humiliation and a physical mode to test-drive uncomfortable situations and detach herself from them. “Some pieces appear fully formed in my mind and I just execute them. Then there are works that I have no idea what they will look like, it’s all a matter of what materials or styles of production fit the idea, and then how well or how poorly I can deploy them.”

Her practice insists on handmade production even though she constantly plays with the tension between the bodily and the manufactured. Her sculptures are hybrids of industrial components ranging from cardboard, concrete, resin, tape to actual trash, with more tactile and malleable textures. She tends to use materials that are fluid at some point before turning into stone as creating a form from a non-form appears to her like an ectoplasmic phenomenon. “Fluidity is an important quality for me. It implies that everything that already exists in the world can eventually be turned into paste.” Although her work has come to be quite recognizable, Ursuta doesn’t want to be associated with a particular style or signature material. “I think it’s important to try things you don’t like. I’m constantly looking for new materials, and hope to eventually use mediums that I don’t have any experience with, like video.” In 2015, making her first foray into photography, she produced a series of photograms on flocked velvet for her exhibition Enslavables at Massimo De Carlo (Milan), appearing like X-rays of oppressed bodies, bringing both split and continuity to a growing practice.

A material that has come to be a sort of trademark might be, precisely, the use of her own body. The latter is sometimes recognizable (Ethnic Bimbo), often manhandled (Crush), and usually unapologetically displayed as in Waiting Area, a large series of resin stools that she casted in the form of her backside and sprayed with colors, which resulted in a sculpture that literary showed nothing but its ass to the viewer. “The bodily references started with representations of my own body because there was no one else to use […]. It’s more solipsism than vanity,” she admits. “I think I return to the body a lot because it represents an obstacle, vulnerability, decay, shame. It’s the thing that is impossible to transcend.” The body in Ursuta’s work is that “pitiless place” described by Michel Foucault in The Utopian Body:3 the opposite of a utopia, a place “which is never under different skies, […] the absolute place, the little fragment of space where I am, literally, embodied.” Besides, Ursuta outlines a body at once saturated with an erotic charge, but also undercut by the self-deprecating and parasitic form of representation that she applies to it: through these specific works that suggest a human figure, she reconfigures in several – and sometimes conflicting – ways the gender power dynamics, which raised many questionings about her relationship to feminism. “I am not a feminist in the sense that I don’t think a woman’s position, interests, achievements or failures are responsible for all the other women in the world.” She doesn’t conceal having evolved within a misogynistic environment or having internalized a certain amount of that misogyny that she now plays out in a silly way, giving life to anti-feminine gesture as a form of resistance. She’s not really the ism type and it seems like being a great artist might be the most productive way she came up with to be a feminist artist. Overall, Ursuta turns her nose up at making any politically correct statements through her works, or even appropriately “rebellious” ones which she considers worse. “I want art to allow me certain experiences and perspectives that I can’t have as a particular individual […]. An artwork can help me experience what it is to be a catholic martyr, but there could also be an artwork that lets me experience what it’s like to be a suicide bomber. It doesn’t matter what my personal beliefs are, art is a fiction.”

More generally, Ursuta is less interested in what content viewers read into her work than with the physical relationship between them, like who’s dominating whom, hence the horizontal hierarchy that often appears in the viewing experience: often, there is an invitation for the viewer to look down upon the work, whether it’s a tombstone (Zombie 1-6, 2013) or a flattened figure (Crush, 2011), an advertisement for a prostitute (Ethnic Bimbo, 2012) or an anthropometric obelisk sitting in a chair (Whites, 2015). The physical positions of the pieces create a certain collusion: the viewer is able to overcome the apparently dark vibe of a practice that is, indeed, obsessed with death, but that is also full of mordant humor, “desperate but not serious” as the artist puts it. “For me humor is the ability to isolate moments of misery from the larger, overall misery of being alive, and examine them as honestly as possible.” Honesty is probably what defines Ursuta best. She never pretends, which is most likely why her art ultimately resists being pinned to any time or place. Dazzlingly lucid, she makes no attempt to disguise her intentions or her role. “Art is some antidote to death – to a certain extent. But in the end it’s more of a placebo, because no fiction can change the reality that we all die. Therefore all art fails in the end.”