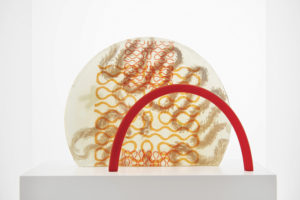 Despite being consistently embedded in elaborate narratives, Anicka Yi’s work possesses a distinctly impressionistic quality. Maybe it has something to do with its central preoccupation with scent, whose pointedly evocative elusiveness is well known. For what Yi does has a similar impact on the mind, allowing itself to be grasped only in fragments, or in response, as if adumbrated, but rarely if ever as a proverbial whole. It has a way of being totally available and unavailable at the same time, like memory, which does not mean that it is sentimental – although so hard to separate the olfactory from sentiment – but rather affective, full of a certain pathos.

“Flavor chemists are illusionists. We can create flavors that mimic the taste and smell of virtually anything. Strawberry and vanilla flavor can be extracted from the gland in a beaver’s backside. Indoles are present in feces. At low concentrations this compound smells like flowers. Imagine if you could taste a multitude of chemical personas. What if you could inhabit the mind of a cannibal? A hormonal teenager? Or be suicidal without having to be socially alienated and go through with killing yourself?”

Thus goes the opening salvo of Yi’s new video, The Flavor Genome (2016) produced for her exhibition Jungle Stripe at Fridericianum, Kassel. Shot partially in the Amazon and projected in 3D, Yi’s video, or rather her script, reads like an arcane log from a research trip into the future of the senses, of taste, smell, and the manifold perversions bound to take place thereof. Alternating between something like the unapologetically-jargon-strewn prose of sci-fi, the gnomic reflections of Borges, and a tropically contaminated poetry, the video functions as a microcosm of Yi’s practice. For it deals with many of the motifs that abound in her work, which include scent, both natural and artificial, the bacterial, perishability, hybridization, mutation, and genetic modification, as well as the bureaucratization of the body. 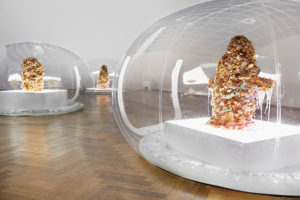 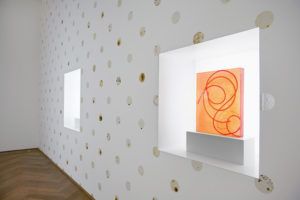 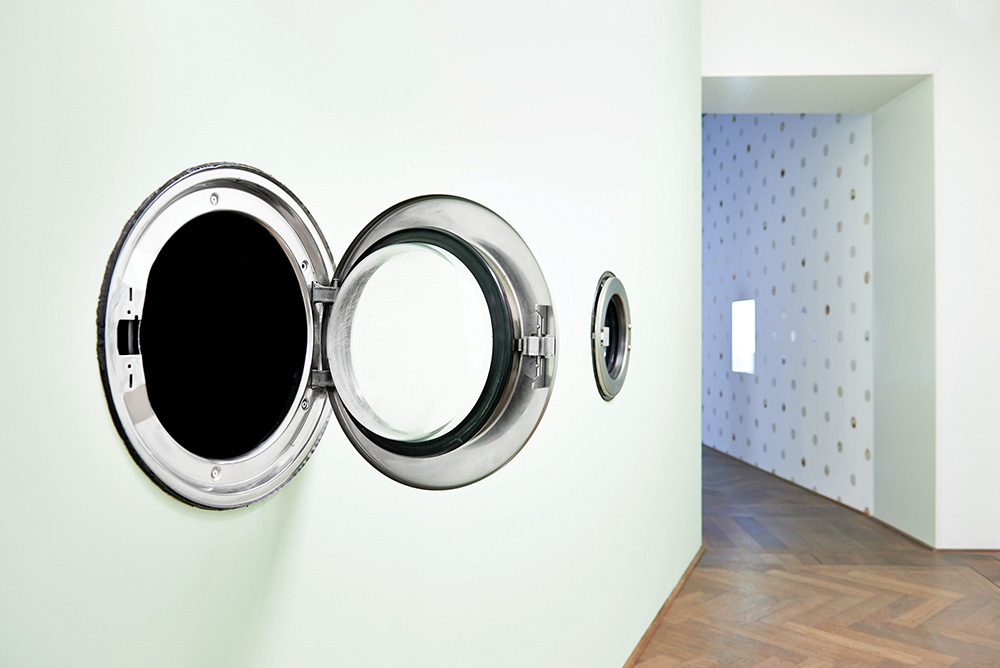 Things have a way of germinating, accelerating and decaying in Yi’s work, as if in a petri dish, under your armpit, or in your pants. Consider her much-discussed exhibition You Can Call Me F at The Kitchen in New York in 2015, in which she cultivated a “collective bacteria” laboriously culled from the vaginas of 100 different women in Grabbing At Newer Vegetables (2015). Distilled into a broad, billboard-like petri dish, the multiplicity of female bacteria evolved under a Plexiglas display filling the room with a pungent odor variously described by the artist as “very sharp and sour, but very warm and voluptuous.” The body as a fleeting anatomy of traces, smears, smudges, and funky aromas. The body as a vast, ever-expanding expanse of body, continually overflowing its own corporeal and porous borders.

It’s not so much that Yi works at the threshold of the visible, but rather that she seeks to privilege an entirely different mode of perception, other senses, most notably smell. She is training our gaze, so to speak, on the life that teems among us, but cannot be seen. In doing so, Yi becomes a great allegorist due to the fact that many of the issues at stake in what she does indirectly deal with some of the dominant anxieties of “our age:” multiplicity (over-population), proximity, germs, disease, contagion, and transmissibility.

Mingling among this invisible dimension of the everyday, the work becomes a specious candidate for the mystical, as if it were in some kind of communion with the numinous. The contents of a number of pieces (almost all of them in fact) are liable to read like spells, incantations or witchcraft. Consider Convox Dialer Double Distance of a Shining Path from 2011, whose description contains: recalled powdered milk, abolished math, antidepressants, palm tree essence, shaved sea lice, ground Teva rubber dust, Korean thermal clay, steeped Swatch watch. Certain of these elements would seem to be obtained through other spells – e.g., “abolished math” – while others bring to mind improbable distances traversed in fables to procure rare ingredients. If the amalgamated fragrance of this work, which consists of the above-mentioned milky-white contents simmering in a pot on a burner, were not evocative enough, then each element, not to mention their conjunction, enters a whole other level of the evocative, forcing it to ramify outward in several directions at once.

Yi’s formal vocabulary, which in many cases seems like a cross between minimalism and the wholly pragmatic aesthetics of a laboratory, replete with cool, manufactured materials ranging from Plexiglas to Mylar, is offset by the essential pathos of her work. This pathos manifests in everything from her use of flowers to the affective dimensions of her language and the narratives it builds. In some cases the flowers are fried, as in her contribution to Some End of Things (2013) at Basel’s Museum für Gegenwartskunst, which consists of tempura-battered-and-fried cut flowers arrayed in the grease saturated beds of opens boxes, themselves arranged in a grid with a minimal seriality, not unlike tiny coffins. The role of the flower as memento mori plays out not only in its seemingly accelerated and arrested evolution (fried flower), but also in the fleeting and unplaceable quality of any scents that may accompany them. 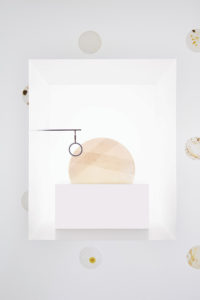 Indeed, it is both the narrative structure in which the work is known to exist and its affective quality that prevents it from being merely formal and/or novel. This is to say that, while much has been made of the work’s privileging of scent and the immaterial, making it a natural historical extension of the likes of Robert Barry’s Inert Gas Series (1969), Yi obviously goes much further than this, anchoring everything she does in the complex stuff of human sentiment, in the very fact of being human.

In The Flavor Genome for instance, she plays with the Portuguese notion of saudade, science-fictionally inventing a plant called Saudaderrhiza (which actually reads more like a venereal disease than anything), which purportedly blooms once every one hundred and seven years. Along the way, Yi describes saudade “as the feeling of missing something you love while knowing that its likelihood of return is unknowable, entirely left to fate.” By the same token, Yi infringes upon and satirizes science’s hubris toward the analytical deconstruction and micromanagement, or better yet, bureaucratization of human affect and psychology. Toward the end of The Flavor Genome, there is a telling and particularly sinister passage to this end in The Pineapple Injection Scene:

“We talked well toward dawn about designing chemical personas. Our product could be the elixir of anguish and anxiety without the commitment of depression and the debts paid to self-worth. Thereʼs a value in having gone through the dark night of the soul. You could be more ‘complex’ with someone else’s dark, edgy history. We could bottle these emotions for a functional apocalypse [emphasis mine]. The longer it aged the more complex the subjectivity, like a multidimensional crystal garden.”

This passage has a way of both acknowledging and dismissing a certain romantic ethos, while also gesturing toward the underlying impetus of progress, which drives science, and which is to render everything functional, useful, and quantifiable – hence the consummate oxymoron: functional apocalypse. What could be more apt, more trenchantly characteristic of the twenty-first century? In which every event, no matter how devastating, is measured in terms of its potential to yield profit? But that is just one of the many facets constitutive of the overall practice of Yi.