Places to fight and to make up 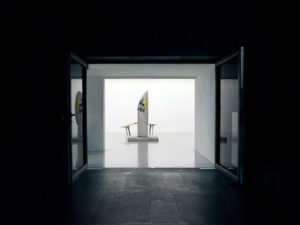 Anna-Sophie Berger (born 1989 in Vienna) is the first winner of the Kapsch Contemporary Art Prize, established to promote young artists who live and work mainly in Austria.

Whilst being young Anna-Sophie Berger has already been able to enter into the art discussion both in Europe and the US, and is probably one of the most interesting personalities in this last generation of artists, not only for her ability in making artworks but also for her capacity to relatethem with an intellectual and verbal structure.

Her research is based on objects and their relation to us. In the Mumok solo exhibition titled Places to fight and to make up the center of the show, at least at first glance, is Parabolic Reflector (2016), comprising two specular and opposite parabolic concrete dishes. The two elements were taken ready made from a park near the appartment Anna-Sophie Berger used to live in, with all the traces left from the people populating this space in their everyday life: tags, lines, words, symbols, etc. 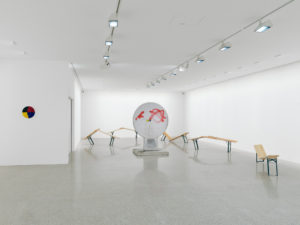 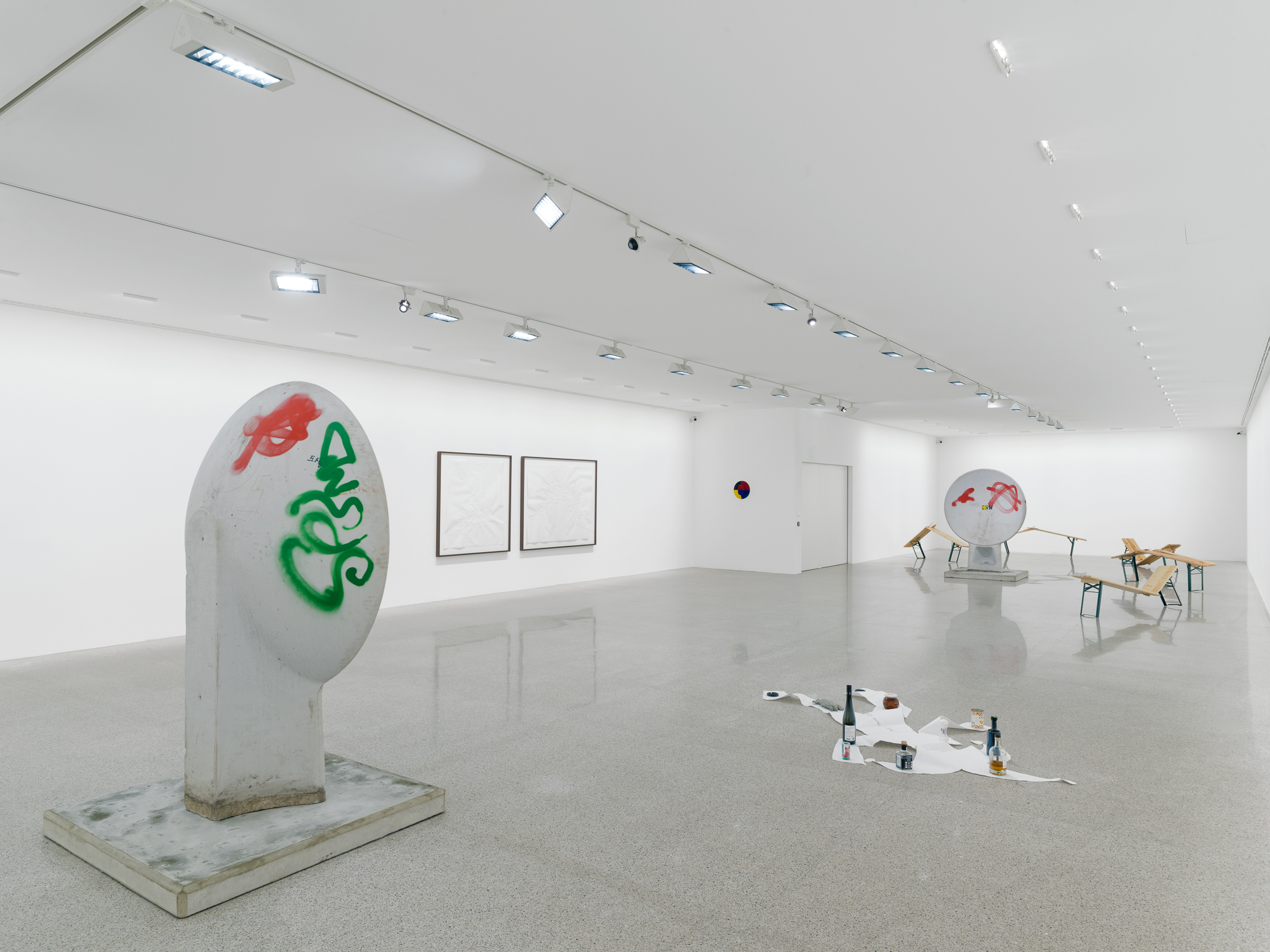 As a piece it incorporates many of the issues upon which Anna-Sophie’s work is based.

This work immediately brings the viewer to enter a space of intimacy, a quality that we can also find in other pieces. One is invited to approach one of the concrete structures but a second person at the other side is needed to fully comprehend the work. Whispering in one of them the parabolas can be used as an acoustic system allowing communication with another person. The duality is a crucial aspect, and in this case it is a double duality: the work is comprised of two interconnected elements as is the case also with the first work by Berger that I saw in person (When I am with you / When I am not there, 2014) in 2015 as part of a show organized at the Basement Roma space in Rome. Two light coats of silk and cotton made by the artist are knotted at the wrists, as if holding one another’s hands.

But in the case of Parabolic Reflector there is also another dual aspect, since the work is made of something stable, or durable I would say, and something unstable and invisible, the concrete on one side and the voices and and the sound waves moving from ear to ear on the other side.

It is something we can find also in older works where coates/garments are soaked with water or even mud and left on the floor, or on walls, drying and, in the case of the mud coat, leaving a trace. It is a second element added to the work that become somehow the soul of the piece in itself. Something evanescent, with a tendency to disappear or to change relatively quickly its status, sometimes invisible and impalpable that we can conceive of only in our mind and with a certain epidermic feeling, paired with an idea of energy released from an ongoing physical process. 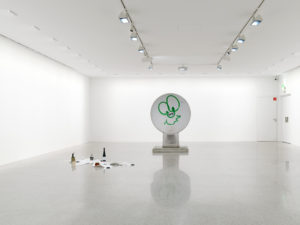 The sensation of a flux in progress, a certain performative attitude while leaving traces is present in all her work. There is a movement that becomes symbolic that relates to the process of falling. We see many things placed on the floor, or in the act of falling down, or laying down: sometimes softly, sometimes more dramatically. All these things carry the sensation of a collapse, a physical one that cannot avoid being perceived as conceptual and personal, even if this is maybe unintentional or is not openly declared. I couldn’t avoid thinking about a famous quote from Finnegans Wake where James Joyce posits “First we feel. Then we fall”. The traces left behind are the traces of a relict that become a relic itself as highlighted in the titles of the two framed works on paper (Choicest Relic (1) and (2), 2016) also on view in the Mumok exhibition. Two candid pieces of paper, probably cut from a long roll have their surface corrugated by contact with a wet coat.

The maturity of Anna-Sophie Berger’s practice reveals itself through the never-ending ambiguity that can be seen in all her works, making objects that move around the edge of a certain social and political instability, sucking energies and fears from it, disquiets and hopes, but never embracing them directly. In the gallery at the museum we furthermore see broken benches (do consider these models are almost indestructible) that could have been taken from a common beer garden, yet again from a public space that people use to congregate and have fun in. But they don’t have the lapidary aspect full of dead of the ones made by Jenny Holzer for example. The broken benches seems to be more the result of a violent clash between hooligans. They could also be connected with a wider history as suggested by the stickers (Atlas, 2016) attached to them and on the surrounding floor. These stickers brings forth an image relating both to a historical and contemporary Greek context.

There is a sense of radical social change that subtly runs through the whole show. And these tensions culminate in the piece Drunk or Dead? (2016). It is a white paper Joker, a symbolic figure capable of connecting an idea of political overturning with a more personal and individual attitude that we often relate to the figure of an artist. The silhouette on the floor is fixed by different types of bottles and cans and it alludes to an older work in the show, a hat (Trivial Pursuit, 2013), also on view. Made from four different hats cut to pieces and reassembled in a harlequin style it hangs on the wall as do two sheets of drawings (Spider’s Drawings (necklace) and Spider Drawings (handcuffs), 2016) where the artist pairs a linguistic shifting with the drawing of a choker.

Like with these last drawings, the starting point for Anna-Sophie Berger in realizing an artwork is often connected loosely with her biography, but this story is not told openly. What remains is the feeling of it somewhat under the surface, as something subtly present and evoked by the presence of family members or the strict circle of friends that she uses in exhibited images. In this aspect particularly I sense a certain affinity to Felix Gonzalez-Torres and the use of tenderness and intimacy as a political tool of subtle revolution. I feel this connection in the use of the objects as vessels for a psychological climate, for emotional states and as a tool of communication with others. The works refer to strategies that foster human relations while we see a lot of textiles and everyday objects, printed matter in the work of both artists, and an importance placed on the use of food.

Anna-Sophie Berger’s works with and around food can be seen too as an engagement with possibilities of safekeeping and taking care of one another. Finally there is the smallest and yet one of the strongest work in the exhibition, a little Pea Earring (2015) stuck in the wall, almost invisible, and made of a pea seed framed in a silver support.

There is a lot to say also about her use of words and language, but I think in this exhibition it is more important to focus on other aspects. I just want to point out the relevance of the catalogue to the show – actually not a catalogue but more so a piece among the others – or as I should say a Manual, as it is titled. It is different from any other printed matter I saw recently accompanying an exhibition as it is somehow in between an artist book and a small guide to understanding the show. On the right pages there are all the texts, many from Anna-Sophie Berger herself, while every left page displays images from different sources: some are work documentations, others are taken from Instagram or the Internet, some are suggestions (taken or found) which are important for the artist. They appear on these pages like images to be scrolled through on a website or blog, breaking with the tradition of how pages are conventionally edited.

Anna-Sophie Berger
Places to fight and to make up