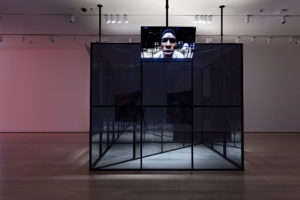 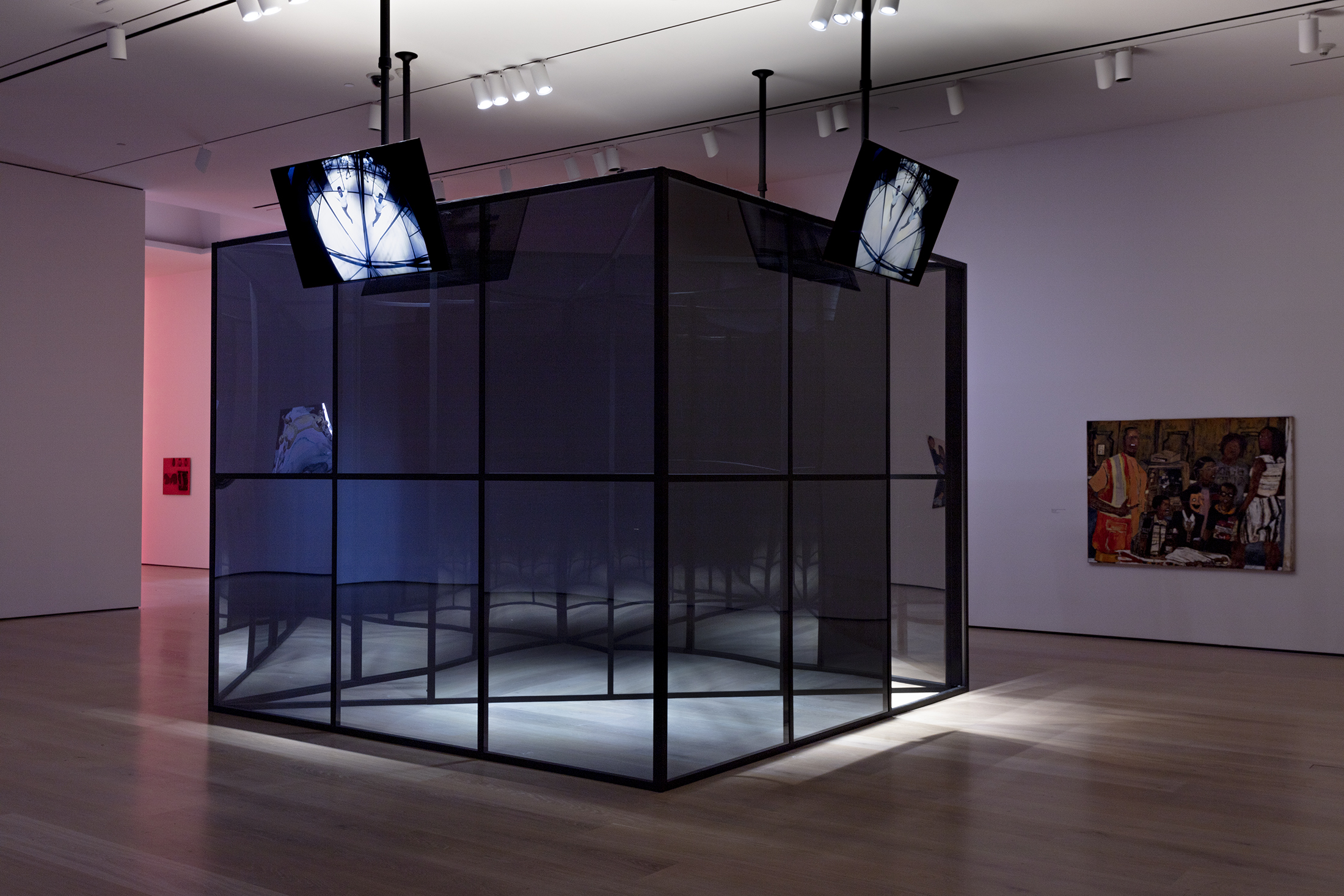 Aria Dean turns conceptualism and minimalism into readymades for inquiry into information’s racialized materiality, which circulates “to concretize and ratify ideas and paradigms.”[1] She explores how “[t]he history of black people… is intrinsically bound up with the history of mass media and photographic and moving images”[2] in a rigorously playful, wide-ranging practice that yokes the primacy of ideas with the yearning to reach an experience of essence through sustained attention to permuting structures.

In cipher (3) (2018), the Ad Reinhardt quote sign which refuses to signify appears reversed in vinyl on the wall; elsewhere in the space, a mirror allows the viewer to see the sentence. In BLACKBOX (2017), Dean encrypts three Reinhardt quotes[3] and etches the encrypted strings on a shiny black plexiglass box. A related work, box (a clear mirror) (2018), features encrypted strings on a clear box. 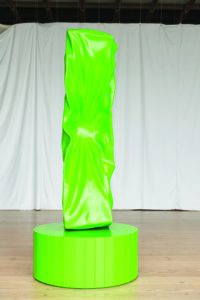 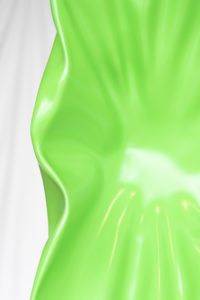 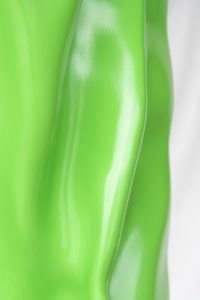 In Eulogy for a Black Mass (2017), Dean collages memes, the Notes app, voice-over, et al to explore how “memes have something Black to them.” Certain forms mainstream; others remain close to Blackness’ fugitivity, circulating in ways we might anachronistically call ‘underground.’ A sign’s refusal to signify can provide, as cipher (4) quotes Jean Genet, “dreams who dream of swallowing up their dreamer.”[4] A dreaming object swallows itself up—consider Dean’s attention to gestures containing conditions for their own negation to focus on the structure of context as a phenomenon in built space.

Semantically overdetermined materials constrain a concrete poetics of obfuscation. In Dead Zone (1) (2017), Dean coats a cotton branch in polyurethane and encases it in a bell jar affixed to a circular wooden base with a hidden signal jammer. The latter blocks signals on all cell phones in the space, evoking the overburdened sign’s secret potential to impact unseen structures in the encounter. With an untitled series of cotton batting stretched like canvas over stretcher bars, Dean invokes the language of monochrome painting to lay bare the mundane past and present violence of cotton as symbol and material, while also invoking functional context—cotton batting serves as common inter-fabric insulation material, such as in quilting. Batting is in this sense a support, like stretcher bars, raising formal questions regarding foreground and background. These monochromes reveal a rough density of surface textures which subtly glow from within. 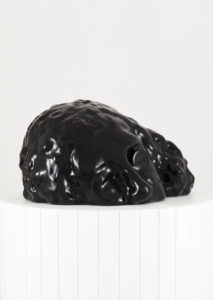 WORK (footnote in the story of how the spirit came to name itself), 2022 Photo: Zeshan Ahmed. 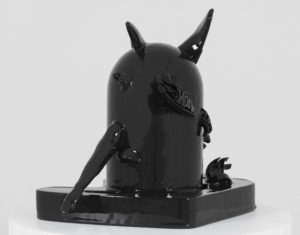 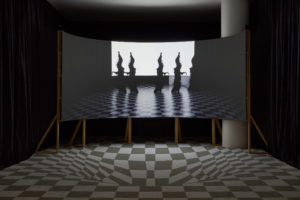 Another series draws on genealogy and geography to register a subtly complex surface. Forward Proxy (2018) is a series of circular wall-mounted sculptures of red clay, resin, and wood, with the clay sourced from the banks of a Mississippi river significant to Dean’s forebears.

Materiality of surface renders context akin to the support in painting. Dean rejects this relegation to background by emphasizing the materiality of both context and lack thereof. Surface becomes a site to recalibrate the relation between background/support and foreground/object. The forms of (meta)models or how i got my groove back (2019), built from two-way mirror glass, evoke US police interrogation rooms, surveillance society, and the Lacanian mirror stage. While hard and flat, these (meta)models also seem to float given their flowy, Matisse-like silhouettes. A dummy security camera in a corner of the gallery ceiling positions viewer as suspect and (meta)models as arbiters hidden behind the opacity of reflection. A tripod-mounted monitor plays a video of a two-way mirror glass plinth from various angles; a voice-over by artist Devin Kenny simulates a chat between three rap radio DJs debating ontology.

King of the Loop (2020) plays with concealment, built space, and narrative. Edem Dela-Seshie monologues in a mirror box laced with numerous cameras; the installation features a recording of the monologue played on four monitors, one in the center of the upper ledge of each of the four walls of the empty set. The narrator has crashed his car in a Mississippi river on an abandoned plantation. Taken in by three squatters, he becomes obsessed with a shack where Brah Dead lives. He enters the shack only to find that it’s a single mirrored room and that he is Brah Dead. Like Sufi poet Attar’s Conference of the Birds (1177),[5] but more surreal camp than ecstatic mysticism, Dean yokes the yearning for narrative fixity to the soul-splitting drama of belief. Here, one actor plays four roles, akin to the plinth’s representation of three radio DJs. Dela-Seshie’s performance as he moves between compartments of the set highlights the dizzying structural elements of the box as it refracts his form. Rather than create the illusion of space, the mirrored walls underline a visual sense of confinement.

Dean’s work is driven by attention to a friction between narrative/content and form/support. The tension between these seeming opposites feeds something else, something mostly imperceptible except in a sudden flash or grasp of a certain structure or sequence. This may be why Dean works in idioms of materialist cinema[6] and theater. Time-based practice allows for the juxtaposed concepts in Dean’s works to circulate—both in the work, and in the viewer’s gaze—to undergo permutations and distortions that explore the dialectic of concealed and obvious, hyperbolic and understated, materialist and revisionist.

In her 2021 solo show at Greene Naftali, Show Your Work Little Temple, Dean generated minimalist forms which map the confluence of industrial consumer goods production processes and the capture of value in signs-in-motion. Two sculptures made of 3D prints in polylactic acid and pigmented silicone collage classical sculptural gestures, the bell jar and wood base shape of Dean’s Dead Zone series, the Hot Wheels logo, etc. to generate a Frankenstein of the shape of circulation as material process. One emerges from the silhouette of a Dead Zone’s bell jar; the other from minimalism’s Ur-form—the cube. Like an Animorph frozen mid-morph, or like Fanon’s operating table, they occupy the porous boundary between sacred and profane, daemon and divine, recycling and cannibalization—both flesh and not. 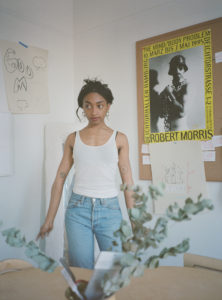 The bondage of appearance”; “The laying bare of oneself is obscene”; “Sign which refuses to signify”.

A group of birds seek a cave where the divine Simorgh lives; upon entering it, they find only themselves reflected back to themselves.

Peter Gidal defined materialist film’s root concerns as “[t]he structuring aspects and the attempt to decipher the structure and anticipate/recorrect it, to clarify and analyze the production process of the specific image at any specific moment.”

manuel arturo abreu (b. 1991, Santo Domingo, Dominican Republic) is a non-disciplinary artist who lives and works on the unceded lands of Multnomah, Cowlitz, Clackamas, Chinook, Kalapuya, Confedered Grand Ronde, and Confederated Siletz peoples, and other Pacific Northwest First Peoples. abreu works with what is at hand in a process of magical thinking with attention to ritual aspects of aesthetics.