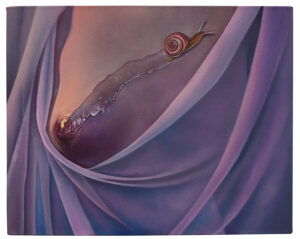 Ariana and I met a few months ago, when I went to visit her temporary Roman studio located in a narrow street in Trastevere. The studio faced the walls of the city’s prison Regina Coeli, and the entrance is only two doors away from the Istituto Sacri Cuori for missionary nuns in Trastevere. We spent some time talking about seclusion (the prefix se-, which means “apart”, implies a place or a condition that’s “closed away”), and what means artistically, and personally to her. I knew some of the new paintings she made while in Rome had to do with this feeling, but it wasn’t until I visited her studio, being in the immediate vicinity of these two architectures with such charged isolating connotations, that I realised the extent to which Ariana’s Roman location had to do with the poetics of her new exhibition Baby Alone in Babylone.

The institute and the prison are two of the most extreme forms of architectural enclosure one can find in a city and yet, are very much the opposite: in the case of the nuns, temporary seclusion is a choice, for the prisoners, an obligation. For this series of paintings, Ariana looked at what she described to me as “that feeling of wanting to be free and tamed at the same time”. Like the captive unicorn in The Hunt of the Unicorn[1] — one of two tapestry series of the late Middle Ages at the origins of her research on the mythological creature’s iconography, (the other one being The Lady and the Unicorn[2]) — Ariana’s fantastical animal, main character, and alter-ego within her new paintings, seeks freedom as well as domestication as it journeys through different transformations, ages, and emotions, to find its place (in the world?).

The tale Ariana constructs in Baby Alone in Babylone is also about cities. Titled after Jane Birkin and Serge Gainsbourg’s 1983 album of songs portraying the city of Los Angeles (the city where Ariana was born and lives on and off) as a modern-day Babylon, the show starts with a sombre baby unicorn huddled on a wooden chair. In Self Portrait 1996, a gloomy interior atmosphere surrounds the little creature, who sheds a single teardrop. The chair’s wicker transforms into white daisy flowers: through a game of transparency that is recurrent in Ariana’s work, the vulnerable unicorn is for a split second found sitting in a flowery field rather than inside a domestic looming space. Throughout the whole show, Ariana uses see-through painted veils to keep the images alive, and to open up portals to divergent realities.

“The taming of the unicorn has been connected by mediaeval poets to the subjugation of love. Unicorns have been known to only be tamed by a virgin”. She tells me. In a second much bigger painting, the unicorn has grown and sits still on a bed inside a dark panelled chamber. I keep telling Ariana that I find the scene in Horror Vacui daunting to look at. The void of the room and the sinking bed are reminiscent of those ‘safe spaces’ that become one’s own prison. Like a confined and judgement-free refuge for the broken-hearted that is hard to leave behind. It’s irrelevant to know whether the horned creature is held captive or it’s self-isolating, what’s certain is that it is passively reaching for the outside, as it stares into a mirror where a woman’s face looks back at it.

The eerie virgin reappears (although remaining ghostly in its presence) in the diptych at the centre of the show. It’s a loopy and illusionistic two-panel scene in which the virgin and the unicorn look — respectively in each painting — inside (the unicorn) and outside (the woman) the castle’s big window. “In Jung’s Alchemical Studies, the unicorn is a manifestation of the spirit..” Ariana explains to me. Confirming what’s very much present all over the show: the constant metamorphosis between the unicorn and the virgin nymph, and the unicorn and the artist.

The final cocoon is a big, bright, and pearlescent seashell with fresh water spilling from its aperture positioned in a renaissance landscape. Referring to an early 16th masterpiece Landscape with St. Jerome by an unknown painter, Phases of Venus represents the next (not final) stage of this journey: safety and wilderness are balanced here. The shell, symbol of Venus, transformation and the divine feminine, is a protective transportable shelter. Here, the ideal home is an extension of the body.

“I was supposed to only paint unicorns for this show, but then the snail, the breast, and the glass slipper arrived. I felt there was a necessary need for light, and playfulness.” Eventually, Ariana twists her own mythological lyricism to bring irony – and exposure – back in through two smaller paintings: a close-up of a woman’s chest with a tender snail leaving a translucent trail on it, and a transparent stripper shoe. In these two small-scale paintings Ariana exposes feminine virtues and sensuality, playing with the balance between the snail’s vulnerability, protection, and exposure.

Transformation is never linear, nor painless. Like a multi-reality, coming-of-age chronicle that hits close to home, this show taps into all the ambiguities of this cathartic self-journey. Ariana’s work is known for challenging and channelling womanhood, diving into 15th century alchemical symbols charged with opposing feminine energies. In Baby Alone in Babylone, she has created her own time-place machine: from a Renaissance landscape to a LA stripclub, from a Roman narrow street to Babylon, her ad hoc contemporary allegories draw a self-portrait that keeps on reaching different stages as it waves in and out of one’s very own shell. 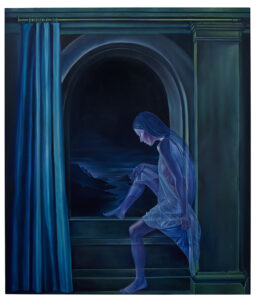 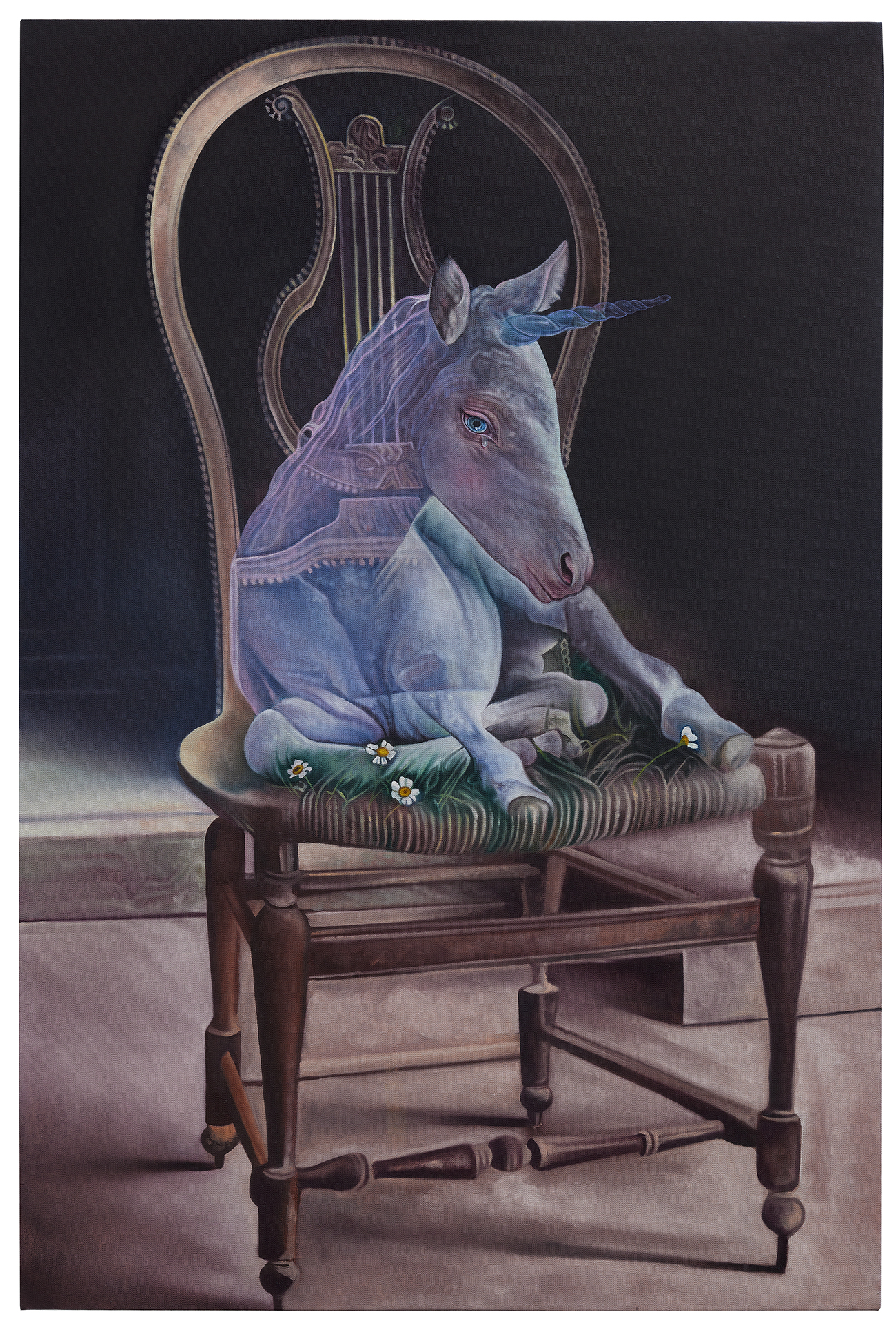 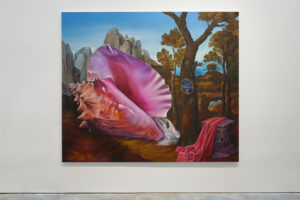 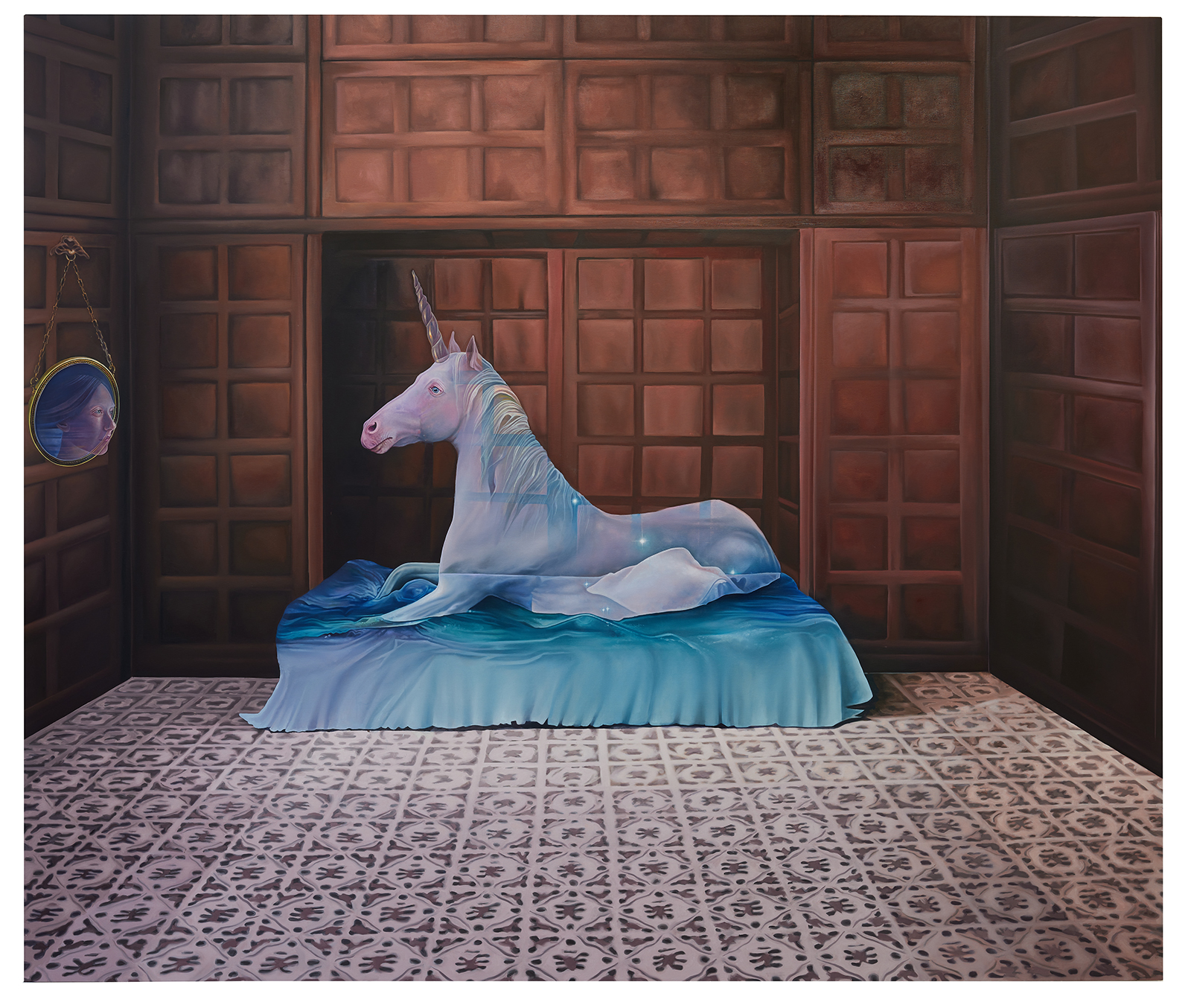 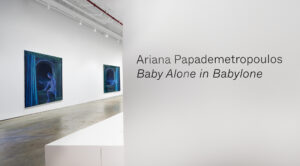 All images:
Courtesy the artist and the gallery