ART IN THE AGE OF ANXIETY 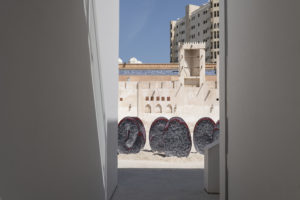 Art in the Age of Anxiety conjures the bombardment of information, misinformation, emotion, deception and secrecy that invades online and offline life in the age of digital technology. It aims to illuminate the ‘post-digital’ condition—the manners and behaviours found in a world altered by the rise of digital technologies—and posits speculations for our future. The exhibition represents the culmination of more than a decade of research on the subject by Kholeif, who has previously curated internationally touring exhibitions such as I Was Raised on the Internet (MCA Chicago, 2018) and Electronic Superhighway (2016-1966) (Whitechapel Gallery, 2016) and authored and edited seven books on the subject, including You Are Here: Art After the Internet (Cornerhouse Books and SPACE, 2014) and Goodbye, World! Looking at Art in the Digital Age (Sternberg Press, 2018).

The exhibition features leading contemporary practitioners and works across a range of media, including Trevor Paglen’s Circles (2015), an epic single-channel video installation offering an atmospheric view into the surveillance state, presented alongside some of his most iconic photographs such as They Took the Faces from the Accused and the Dead… (2019), his infamous cloud photographs, as well as his portraits of historical figures whose faces have been run through Facebook’s facial recognition system; Jon Rafman’s Transdimensional Serpent (2016), a Virtual Reality commentary on the all-consuming nature of technology; and a selection of works realized from Cao Fei’s RMB City (2007-ongoing), a virtual city designed in the online world of Second Life that probes the boundary between real and virtual existence.

Other highlights include a new version of Siebren Versteeg’s iconic 2012 work Daily Times (Performer), which is re-imagined for the exhibition. Here, a giant screen draws from headlines produced by the UAE-based English language newspaper The National and produces abstract paintings in response to its content. Also on view is Jenna Sutela’s musical film Nimiia Cétïï (2018) exploring consciousness, neural networks and a new Martian language. Following its recent presentation at The Shed in New York is the first premiere of Lynn Hershman Leeson’s Shadow Stalker (2019) outside of the United States. This ambitious film explores Predictive Policing, Identity Theft and the dangers of Data mining, featuring renowned actress Tessa Thompson and ‘The Spirit of the Deep Web’ played by January Steward.

The exhibition design for Art in the Age of Anxiety is created by architect, writer and historian—as well as Sharjah Biennial 13 participant—Todd Reisz. Reisz’s work often focuses on cities of the Arabian Peninsula from both historical and contemporary perspectives. Here, he has worked with curator Kholeif to imagine a physical maze of corridors and experiences that will fully immerse the viewer in the imaginary world of the ‘the internet’. 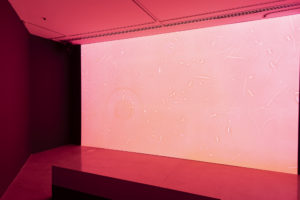 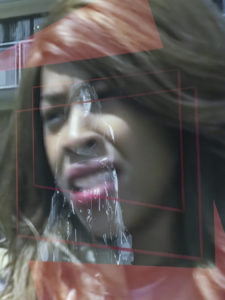 Art in the Age of Anxiety
Curated by Omar Kholeif