Today, humans are engaged in a perceptual arms race. The proliferation of consulting, self-help, freakonomics, therapy, life hacking, neoshamanism – all point to our desire and urgency to think differently, to shift perspective, to refactor perception.

As computer scientist Alan Kay says, “Point of view is worth 80 IQ points.” To interface with a changing world – a world where many of our existing patterns of behavior hit the wall without trying too hard – some humans strive not to make more variety, or accumulate more awareness, but to reinvent fundamental metaphors and models for relating to reality. This is creativity at its most applied. And in our era, the framework for perception-invention has been codified no more clearly than in Silicon Valley. 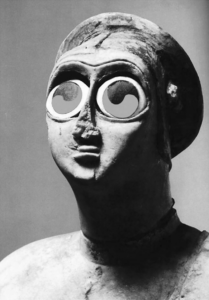 David Packard says, “Marketing is too important to be left to the marketing department.” True marketing isn’t promotion or advertising or rhetoric. It’s the invention of a cognitive perception. In the crowded legacy ecosystem of mental models that prescribe how we read and organize the noise of reality, marketing is the conceptual reconfiguration of reality’s familiar parts that opens rivers of energy and organization previously unavailable. There’s a big chasm between a telemarketer and Steve Jobs, a marketing visionary by even the most jaded accounts. This is a deeply creative activity when tasked to explore frontiers and uncertainties of how we configure the plasticity of the mind to connect to the world.

What is innovation?
Innovation invents the stimulus to trigger the perception. It is the selective cannibalization and adaptation of forms and processes that can manifest marketing’s invented perceptual niche into the material and bodily reality of the customer.

What is the customer?
According to rogue thinker and writer Venkat Rao, a customer is “not a human being, but a novel and stable pattern of human behavior.” Google didn’t invent search, they invented Googling, a new pattern of information discovery behavior. Apple didn’t invent the computer, it invented a culture of relating to and normalizing computers. Customers are not found, they are invented. When a product is truly successful, when it can cross the uncanny valley of a skeptical and habit-holding public, when its perceptual reconfiguration becomes so embedded in our experience and feel of the thing, we don’t feel manipulated but energized by the possibilities of action it opens. This doesn’t happen often – startup culture is awash in incentivized mediocrity – but it happens again and again. There is enough of a legible model in the Valley to keep just enough creative humans striving for that horizon.

In contrast to the Valley, the zone of human creativity with the least degree of clarity is art. Whether by absence of harder pressures or for entrenched legacy reasons, art’s complex history has been long dominated by soft terms – taste, style, personal expression, freedom, beauty, feelings, affect, critical mirror, objecthood, via negativa, this or that medium, art if you call it art. This softness gropes at some of art’s true features, and is inseparable from our blissfully foggy cognitive model of what art is. But like any zone in culture, art is a human activity, one in which energy is exchanged, pooled, reorganized, disrupted. And in any energy exchange, the control of psychosocial perception is key. Peeling back the ineffable softness: Could it be that artists are fundamentally involved with the creation and manipulation of perception?

Let’s stretch the marketing & innovation model onto art and see what happens.

What is art?
A cultural zone engaged in the exchange of energy, whose sacred activity and exercise is perception-making, sensorial and/or cognitive. Play and creative destruction are rewarded and protected because they are precisely the processes yearned for – some useful vestige of the artist as creative locus bursting with ways of seeing.

What is an artwork?
The interfacing-thing that fuses the invented perception and its mechanism of stimulation. In other words, an embodied exercise in marketing and innovation.

What is an artist?
The schizophrenic conflation of hustler & hacker. It’s hard to be two kinds of people at once, and one inevitably leads the other. Crazy happens easy.

What are the traps?
Going too hard one way or the other for too long. All marketing hustle and no innovation hacking is naming the air between air. All innovation and no marketing is a world of digital loom paintings and 3d printed UV inked arduino powered portraiture. Energy that doesn’t circulate between these processes pools and burns fast. An artist with no internal values – driving beliefs willing to be reality tested – is mechanically exercising marketing and innovation like so many Silicon Valley startups trying to find themselves a minimum viable fit within the tide pool of energy.

What is not even being trapped?
Failure to acknowledge art as an interhuman energy exchange. Neither hustler nor hacker, the artist is left cargo culting a long past perceptual invention. Mix-breeding horses, but not even building a faster horse. Testing well-proven values that are themselves eroding in value. Perhaps this is the line that is crossed when art slides into craft and its public becomes everybody and nobody.

What is the artist’s public?
Not human beings, but a pattern of human behavior that has been invented, constructed by the artwork. When we recognize an artist’s work, we are recognizing this unique behavioral pattern stimulated inside us. Duchamp. Smithson. Klein. Rainer. Beuys. Turrell. Lynch. Herzog. Cage. These could almost be mental states, or names of highly specific clusters of feelings, or lit pathways for journeying between distant places in the mind. We continue to intuitively ask how art makes us feel. We should ask more of art: what pattern of feelings does art invent in us?

Why does art need a public?
Because art is an energy exchange, not a lonely thing in the studio, and like how an app needs smartphones to inhabit, the fundamental activity of perception-creation needs minds (and eyes) to metastasize within. The life of an artwork is deeply social even if the artist sometimes isn’t.

Who are clear examples of artists exercising marketing & innovation?
Duchamp didn’t invent the toliet, he invented Fountain – the distillation (and stimulus) of art as perception-invention activity. Duchamp even did consulting, advising Calder to call his sculptures ‘mobiles’. The readymade is still inventing patterns of behavior in so many young artists today, an endless gate of energy. Others: Warhol, Yves Klein, Smithson. More recently: Paul Chan’s Badlands Unlimited, Philippe Parreno’s animated exhibition design, Pierre Huyghe’s indifferent biotope – all zones where a precisely exposed perceptual model meet and push specialist engineering. Tino Sehgal: not performance, but that Tino Sehgal thing he constructs. Sturtevant: marketing ahead of the marketing curve, a psychosocial gamer. Trisha Donnelly: minimal illusion for maximal patterns of alien feeling.

Can we read art history through this lens?
The basic promise of art has always been perception-making. Earlier forms of art took on the challenge of illusionistic / optical perception-making. Renaissance artists saw no separation between perceptual manipulation and scientific innovation. The fissure opened up by Duchamp onward to Conceptual Art enriched perception-making to encompass cognitive perception-making – mental models. Today, nearly every artist is to some degree ‘conceptual’, in other words, engaged in marketing. Iconoclastic positions are themselves marketing positions in times when such perspectives feel underappreciated. The influence of philosophy on art reflects a desire to cannibalize deeper perspectives. Some artists literally market underappreciated philosophy. The enduring influence of Rosalind Krauss’ phrase “expanded field” reflects the compulsion of artists to sculpt perception within broader fields of innovation. Artists cannibalize innovations from the worlds of material science, management science, entertainment, advertising, event design, third world ghetto hacking, Silicon Valley, synthetic biology, nature.

How is an artist different from a startup?
Steve Blank’s definition: “A startup is a temporary organization in search of a scalable and repeatable business model.” The name of the game is to invent a perception that can birth and stabilize a new pattern of human behavior, but an artist’s work is never quite stabilized. Artists engage in cycles of creative destruction with greater frequency and social permission than any organization. Artists habitually sabotage their own game, throw it all away, and get amateur to get outside themselves. This creates an intimate awareness of the impermanence of all things and perspectives, metaphysycs left standing, making art de facto a more spiritual and more materialist activity. Startups can’t afford to be this ‘useless’ for very long.
Scalable and repeatable are qualities an artist’s studio eventually performs, but few artists engaged in perception-creation are truly energized by having to repeat themselves. Except Warhol, he scaled and repeated as innovation. On rare evenings, art invents perceptions and stimuli that ignite patterns of behavior no human is ready to acknowledge or feel. It alienates us from ourselves in ways no startup has an incentive to do or horizon to reach. This is art’s fundamental gamble in the great energy exchange of human culture.

What now?
Among the many wild gems packed into On the Origin of Consciousness and the Breakdown of the Bicameral Mind (1978), Julian Jaynes talks about how Odysseus, who was among the first in his era to mentally grasp time via the metaphor of space. Life wasn’t a perpetual present like for many of his bicameral contemporaries. It was “a present wedged between past and future” with each passing and anticipated moment a place to reflect on within a spatial sequence. Try thinking about time without recourse to the place called ‘past’ and the place called ‘future’; it’s painful to re install old mental software. Perhaps ‘art’ itself is just an expedient name for a more porous energy transaction happening along dimensions that our legacy model of art is only barely capable of grasping. After all, human creativity precedes the zone of art. True creativity in our era is hacking life to bounce forward within the chaos of the anthropocene. This is a world of risk, chance complexity, nonlinear change, disproportionate highs and lows, information wealth, dislocation, peak attention, and ecstatic play. As Odysseus spatialized time in his tumultuous era, we will metaphorize the chaos and noise of now to get outside ourselves, and develop interfaces to surf alien dimensions of material, psychosocial, and informational reality. New emotions will be invented for the occasion.

This contribution by Ian Cheng recently featured on CURA. 34 The Resistance Issue was originally published in 2014 on CURA. 16.