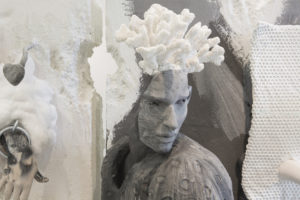 Cajsa von Zeipel is a Swedish sculptor living in New York. When I first saw her work in 2015, I was drawn to the uncomfortability of ‘perfection’ surrounding the totally white, lithe, towering figures. There was an undercurrent of the abject in their aloofness. Looking at the development of her practice from 2015, these figures have certainly shifted.

These technically accomplished figurative sculptures seem otherworldly and out of place with the artist’s educational background in Städelschule in Frankfurt. She makes all her work herself. This is not important in respect to an argument for a return to studio practice, nor in just recognizing the specific skill and labor that this artist enacts, but rather in enabling us to think of the entirety of her practice as an embodied one. Indeed, the materials are constantly in relation to the body of the artist, and perhaps also to those around her. I was recently told that people are tired of the body, but I think what we are tired of is the body as the only location for identity. This is why the recent and much more disruptive works by Cajsa von Zeipel seem to achieve a lot for a figurative practice. The representations of bodies refuse to stick down and close off the subject.

The new ‘bodies’ coming out of her studio should perhaps be understood as relatable, possible. The distinct edges and outlines of monumental figurative sculpture have always been part of the artist’s practice (taking on and subverting the phallocentric with its own tool perhaps), but this has begun to disintegrate. Von Zeipel’s current work symbolizes a Deleuzian state of becoming—it relishes the never-ending messiness of subjecthood. The slightly larger than life, bleached, and terrifyingly flawless figures carved out from polystyrene, built upon and finished off with plaster and aqua resin, which the artist was making only a few years ago (larger than life gangs intent on staring down the viewer), are morphing. Their skin is no longer smooth, their textures vary, pools of silicone settle as part of a body’s skin, tattoos appear, peeking out of the body, rather than placed on top of it. 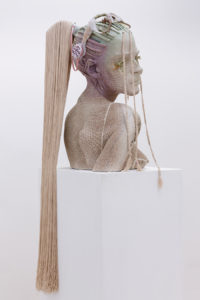 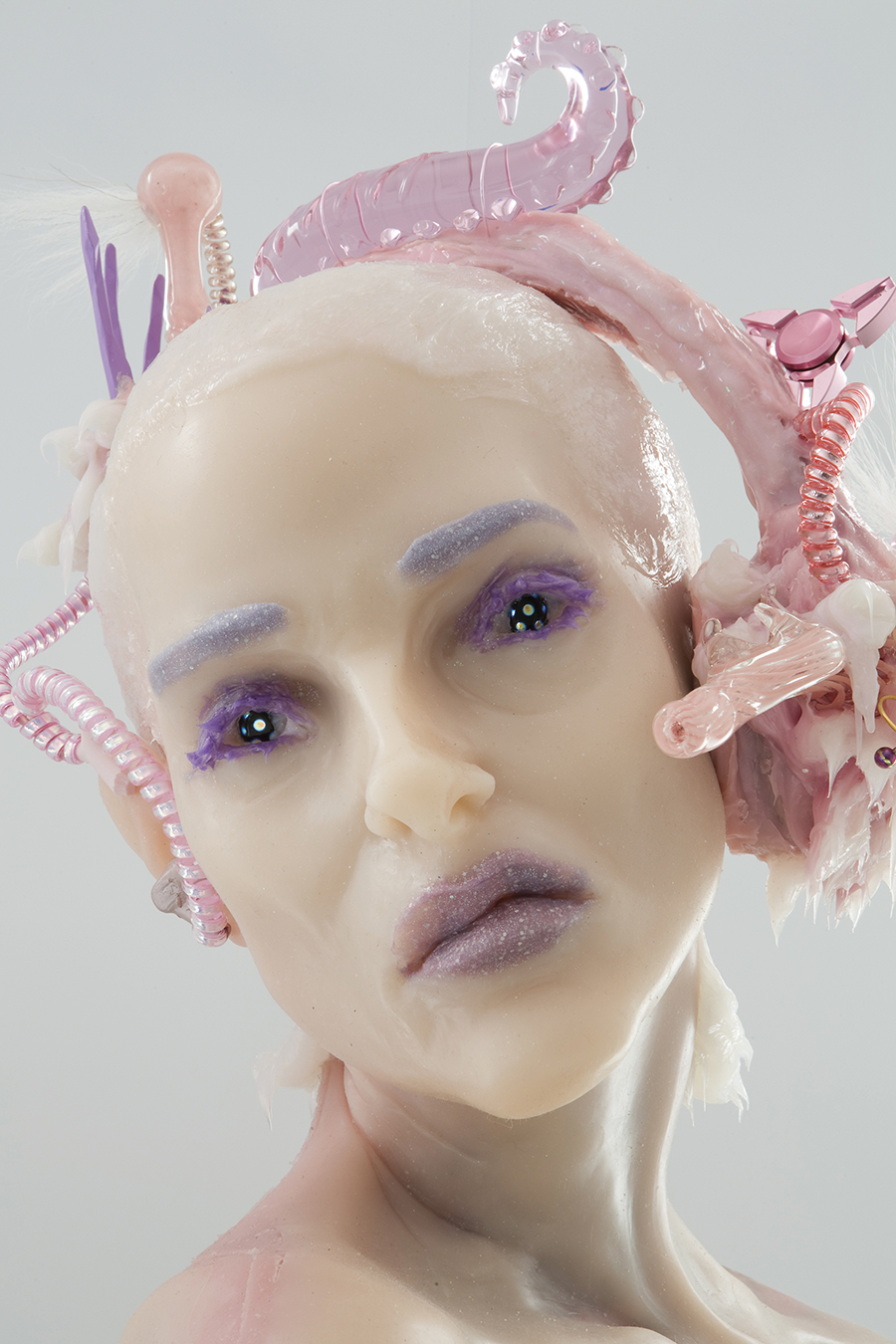 Producing figurations rather than figures, the work has become more propositional of what could happen, as opposed to what is happening or about to happen. As well as inferring potential variations of being, the pieces seem to test them out. Why? and When? have so far been exhibited at a slight distance as part of a larger collective of sculptures, as well as in an intimate kiss, and works such as Lesbians Heading into the New Age appear to be mutating, captured in a momentary configuration of coming together. Have you ever loved someone so much you wish your entire body could be inside theirs and vice versa? Willing that an embrace provokes your bodies to merge on a cellular level? I adore not knowing where I end and you begin. That’s what this work looks like; the beginning and ending of the two figures is unperceivable, and the idealized form of the body that one may think of in some of von Zeipel’s earlier work has been discarded. Becoming-cyborg, one lesbian heading into the new age has a finger grown to dildo proportions.

It’s very easy to see these sculptures as cyborgs, yet their faces hold so much emotion that they may be contorting into technological objects but feel totally relatable. The cyborg herself is not an isolated subject or Other, but more and more is arguably our self. As put by Rosi Braidotti, “new technologies make for prosthetic extensions of our bodily functions.” The fact that the works seem to be so much in flux is fitting for understanding the cyborg—“The cyborg is rather a multi-layered, complex and internally differentiated subject.”1 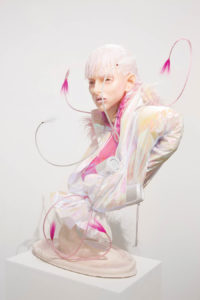 Seeing von Zeipel’s works as interconnected, fluctuating cyborgs prods us to see ourselves as fully varied. Busts connected to speakers, chandeliers as a mix of limbs, jewels, plastics, figures connected to apparatuses comprised of cords, fidget spinners, vibrators. We aren’t looking at one fixed cyborg subject, but many cyborgian versions of ourselves.

Being unfixed is an optimistic state for one to locate one’s own subject in, it resists being read within a singular narrative or dimension. These new works are not foreboding, as creepy as they are, but more exciting, even almost open, because of their frantic transitioning forms. They come into being through a substantial addition of materials to the core form of the figure, of aqua resin, found materials such as beads, clothes, sand, synthetic hair, feathers, silicone, more silicone. Rather than being keen to assert an identity the new works are more ambiguous, their forms are bleeding out, they are in action rather than self-presentation. In identity politics difference continues to be a paradoxical notion, subjectivity often needing still to be self-assertive, yet continuing to trap one within a lens of being read only through identity.

This is why this work is queer, or, if following José Esteban Muñoz’s ideas around the unreachability of queerness, almost queer. Defining queerness is paradoxical due to its lack of ‘locations,’ an identity without a strict identity. For me the shedding of locations is one of the most stark differences between earlier and newer work by Cajsa von Zeipel. Rather than gangs of stereotypically perfect figures, there are more and more messy bodies, mounds of material, stopping and starting and merging in a state of becoming. They show us potential because their signifiers (of gender, or even human-ess) are beginning to erode. We are fascinated with what they are about to become, and less concerned with how we can presently categorize what they currently are.

Muñoz called for a struggle towards a then and there as opposed to a here and now, towards trying to live in a space that does not currently exist. “We must dream and enact new and better pleasures, other ways of being in the world, and ultimately new worlds […]. Queerness is essentially about the rejection of a here and now and an insistence on potentiality or concrete possibility for another world.”2 These works push away from the present, away from conservative signifiers of subject, they are on some kind of precipice. Working towards a then and there is reflected in the objects growing out of and attached to works such as The Debutant. On the one hand there is a retro idea of sci-fi, yet on another—through the use of everyday objects and materials—they seem plausible as a near future.

Von Zeipel’s recent pieces are sticky, themselves in transformation, a practice in evolution. We are never complete, this is hopeful, there is so much to be rid of. A self-reflexive subject I think sees themselves in these pieces—a forever incomplete work in process, an impossible horizon. Writhing, unended, untethered, or tethered to architecture as if a vision of the horizon itself, these forms are never reachable, but maybe recognizable.

CREDITS
All images
Courtesy: the artist and Company, New York

CAJSA VON ZEIPEL (b. 1983, Gothenburg, Sweden) lives and works in New York. Recent solo exhibitions include: Arcadia Missa, London; Company, New York and Andrehn-Schiptjenko Gallery, Stockholm. In 2015, a monograph of her work, Pro Anatomy, was published by Capricious Publishing, New York. Von Zeipel studied at the Städelschule in Frankfurt and the Royal Institute of Art in Stockholm.

RÓZSA ZITA FARKAS is based in London and is the founder of Arcadia Missa gallery & publisher.