in conversation with Martha Kirszenbaum 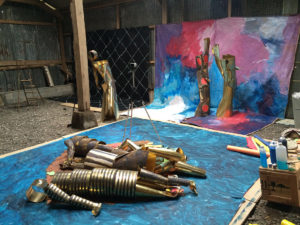 Caroline Mesquita’s (b. 1989 in Brest, France, lives and works in Paris) sculptural practice intertwines the materiality of her altered, oxidized, and painted copper and brass sheets with theatrical playfulness, and her metallurgic experiments result in life-size figures interacting with each other in a mise-en-scène crafted from the sculpted sheets. The characters dance, love, and face both each other and the viewer, their presence blurring the line between humans and mannequins.

Martha Kirszenbaum Caroline, we met in Los Angeles in the spring of 2014, while you were studying at the Mountain School of Arts here and sojourning in the city for three months. Why did you want to come to L.A. then, and what did this experience bring you?

Caroline Mesquita It was actually a bit of a coincidence that I ended up in Los Angeles. In fact I wanted to leave Paris for a while, so I applied for different residencies. My friend, the artist Daniel Dewar, recommended the Mountain School to me, so I sent them a letter and I was accepted. Spending three months in L.A. was fantastic: it helped me to discover a non-French way of looking at art, and what I enjoyed most was getting lost in a big city.

MK You grew up in a village in Brittany, on the west coast of France. How did you end up in Paris?

CM Indeed, I grew up in a village of 1200 inhabitants in Brittany with my mom and my grandma – three generations of women. I completed my BFA in Rennes, then moved to Paris to study at the Beaux-Arts, and stayed. When I moved to L.A. I had in fact never left Europe before (laughs), so it was kind of a big deal.

MK One of the first things you told me when we first met was that you had found in L.A. the countryside feeling of your childhood town in Brittany. You mentioned the relationship to nature you had as kid, running in the fields and rolling on the dusty floor. Has this shaped your practice?

CM I truly grew up this way, and in L.A. I felt that I was living on a gigantic campground! I actually camped a lot when I was younger, but in this style of low-profile and cheesy type of camping vacations in France, with trailers, and dance parties, which always ended up around a cheap pool listening to Fun Radio (a very popular French radio). You know, first boyfriends in the shower and coconut-scented shower gels… Speaking of trips, a great memory I recall from my time in Los Angeles is the road trip we did together to Marfa. Do you remember?

MK Yes! We went to see our friends who were on a residency there, and we drove through California, Arizona, New Mexico, and Texas. It was funny, because I insisted that we stop at the Frank Lloyd Wright Foundation in Taliesin in Arizona, and White Sands in New Mexico, while you were obsessed with finding copper mines. We went to visit some of them and they were mind-blowing.

CM I was already working with copper plates, and I was so curious to discover the origin of this material and how it is extracted from the earth. While being used in very banal contexts, such as plumbing or electronics, copper is actually a limited resource, so its value is increasing. The copper mines in the south-western U.S. have transformed the landscape into surreal red mountains. I loved this trip – us cruising in your white car with the music blasting. Unforgettable!

MK At this time, you were experimenting with different chemicals in order to alter the surface of the copper plates you were using. Do you still work this way?

CM It was actually the beginning of my experimentation with metal oxidation. I was getting this recognizable green-gray patina found on public sculptures or church roofs. I would use different chemicals that allowed me to expand my palette of colors toward pink or yellow tones. This year in particular, I’ve been producing paintings and sculptures made of oxidized copper or brass, transforming its original color thanks to chemical reactions. For my recent exhibition at MOT in Brussels, I even painted metal sculptures with a particularly resistant paint. I like the idea of challenging traditions and the sacred sculptural gesture through the use of chemicals or paint.

MK The paint on the metal makes your sculptures more human, as they become animated through the use of color and movement. This started with your series Windsurfers (2014), which you produced for the exhibition Europe Europe at the Astrup Fearnley Museet in Oslo, and where the characters were displayed in athletic and often sexual positions, tendencies still present in your more recent works.

CM I’m indeed interested in creating human figures, though I never want them to be presented alone or as individuals, but only as groups. In the exhibition at MOT for instance, I produced an ensemble of twelve characters. I’m interested in human gatherings and in questioning why they take place. In my sculptures, I am rather more focused on the gesture performed by the characters and the fact that I can multiply that gesture than on the detail of the figure itself. 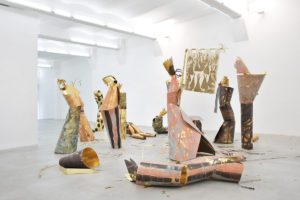 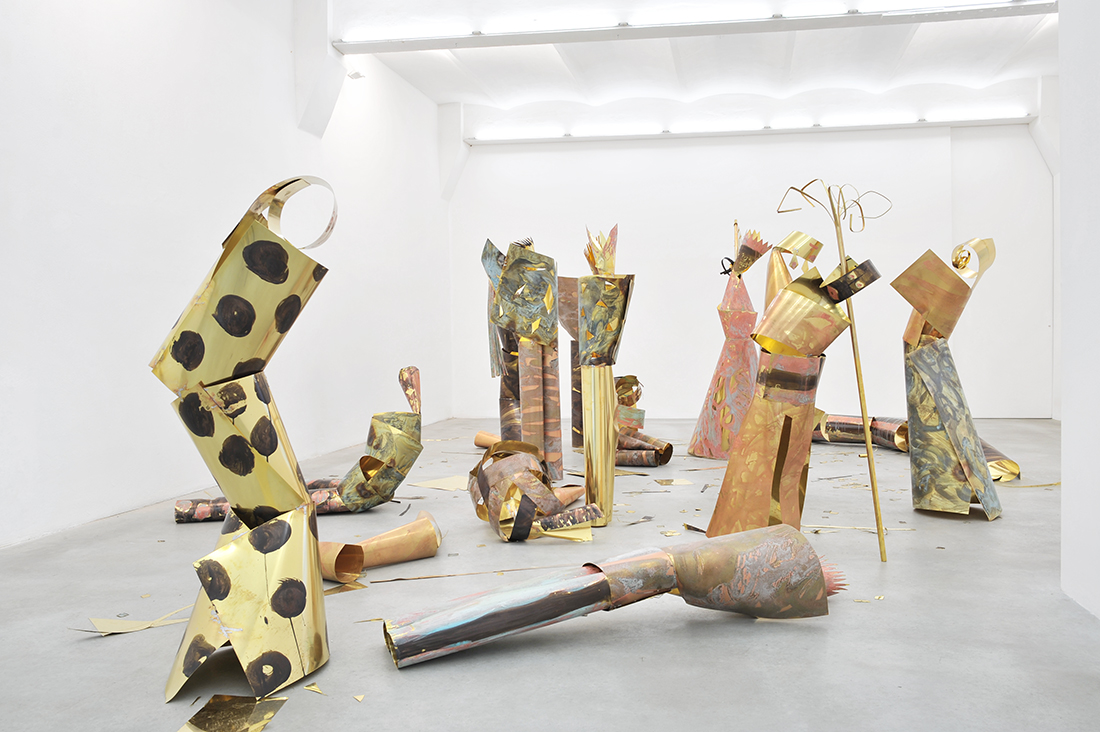 CM In the beginning, the figures were naked, incarnating the bodies of surfers. I was also using oxidation to imprint human shapes on the sails of the windsurfing boards. They would represent the physical world as well as fantasies – some very erotic scenes with superimposing bodies, butts, and thighs. Later on, my characters were made of curved brass sheets, resembling clothes. For the exhibition in Pistoia last May, I wanted to represent a fancy society moment, such as an opening attended by dressed-up people. As the characters’ surface was oxidized, they looked like they were posing in a fashion show: a sophisticated moment but a bit off. A lot of elements were unclear: it was, for instance, impossible to determine the sex of the characters. I wanted the installation to appear quite glossy at first glance, and the closer one would get, the more decadent and neurotic the details of the figures would appear – unclear gender, nonchalant positions, body parts scattered across the floor. It felt like a ceremony taking place within a horror movie. I really like when things suddenly go out of control.

MK What first comes to mind upon looking at recent installations is theatre – commedia dell’arte for the color tones and the simplicity of the forms, or Polish theatre, for example Tadeusz Kantor, for the absurdity of the situations.

CM Yes, it’s true. I’ve never thought of these particular examples. I had in mind the work of Oskar Schlemmer, William Kentridge, but also of filmmakers like Éric Rohmer, Busby Berkeley, Chaplin, and puppets, even ones I saw in the streets or vitrines.

MK And how about dance? When you took part in the exhibition The Space Between Us at Fahrenheit in the summer of 2014, you produced a series of dancing bodies made of steel tubes. I’m also thinking about your series Dance (2015), for which you imprinted body shapes onto fabric.

MK It seems like feminine figures are important in your practice.

CM In my exhibition at Union Pacific, I only represented women positioned between a pool table and a hammam. I like to shift roles outside of usual identities. The large work I made in 2015 for abc – art berlin contemporary was very theatrical: it was like a frozen film sequence of a bohemian street scene where a poetess would recite lines surrounded by a group of her lovers, inspired by the feminine figure in classical paintings from the French revolution, such as Delacroix’ La Liberté Guidant le Peuple (1830) or even La Victoire de Samothrace (190 B.C.) or the Statue of Liberty (1886). I’m very inspired by classical paintings; I go to the Louvre a lot.

MK I remember when you designed the bar for Fondation Ricard’s annual party in Paris last fall, where you titled each sculpture after one of your girlfriends. Is your own social environment a direct influence on your work?

CM Not directly, but I’m interested in the relationship I can have to my subjects. I like to be in direct confrontation with the situations that I recreate in my sculptures – going out or dancing. I like to provoke awkward social situations, to push boundaries, and to challenge our relationship to other people and to the world. I wanted to make a film for the exhibition at MOT, as a prolongation of my sculptures. I’m interested in going beyond the immediacy of the sculptural medium, and to use the sculptures to create prints, sound, or to stage them in a film. I recall a moment when, after the show in Berlin, my installation was stored at my gallery [Carlier Gebauer], and I found each character disposed separately in its own position on random crates. It really looked like the backstage of a theatre, and the sculptures seemed to be resting after the moment of the exhibition.

MK How do you interact with your characters, particularly in the films currently projected at MOT, in which you hold them, paint them, and dance and talk with them?

CM When I worked in Carlier Gebauer’s basement to prepare the installation, I spent two months with the sculptures, oxidizing them, painting them, and dressing them up like dolls. When I was leaving the studio, I would imagine that the sculptures would come to life at night as soon as I turned around. So I wanted to convey these particular interactions.

MK You remember this episode of The Twilight Zone we once watched together, when the mannequins in a department store come to life at twilight, blurring the line between bodies and objects?

CM Yes I remember, and this is exactly what it is about. In the film, I developed seven different stage designs, where the sculptures and bodies find each other, cuddle, make love, are curious about each other. We also see the sculptures evolving aesthetically: the gold of the brass, oxidation, paint. Some moments in the film are more violent and experimental, as it attempts to transgress the limits of the moral. I play my own role, talking and interacting with the sculptures, and often forgot that there was a camera on me.

MK What’s interesting in the film is the paradox between the surrealist moment, when objects come to life on screen, and the very mundane documentation of you working in your studio.

CM It indeed starts with a more technical approach, and then the film literally flies off the handle (laughs). What I like about having a studio in the countryside of Brittany is that I am alone for days and then things turn into something weird: I start talking to my sculptures, dancing with them, telling them stories. I actually very much enjoy this embarrassing relationship.

MK Does the position of being a female sculptor inspire you any particular thought?

CM Yes, it is very important to me. I look at a lot of female artists, and I realize the vulnerability, the doubt and the constant questioning of revealing yourself as a female sculptor. I don’t think about it every morning when I wake up, but when I go buy an angle grinder and fifteen sheets of copper and all the men at the shop give me a funny look, then, yes, I remember that I’m a woman!