I first met Nikima Jagudajev at Café Fiat on Mott Street in New York City. We were meeting at the recommendation of a choreographer friend, who knew we were both in New York that spring. We talked for a while and I was struck by a combination of two things: intelligence and a quality of vulnerability or sensitivity that made it instantly possible for us to talk as if we’d been talking for a few years. The connections came very quickly and within short order I invited her to take part in a piece I was doing at the Whitney Biennial, for which I needed “caretakers” to help take care of a grove of trees inside the museum, and also interact with visitors. Nikima not only ended up taking part but was there during the formation of the piece, giving various dramaturgical and practical advice, finding a friend to construct elements. She also contributed her personal diary to the piece (each caretaker placed certain of their own possessions with the trees), which Jerry Saltz spent a good hour reading at the press preview, which was a little weird but also unsurprising. She has a way of engaging with the world that seems to break down certain kinds of barriers between intellection and affection.

By that time I had seen her work too, at Judson Church, a piece called Fast Food. Walking in, there was a rich dynamic of presence and absence with respect to the situation. The stage was no longer the focus—instead, there were pockets of activity and the entire space felt like a composition. On one side of the large room, a line of people demarcated the space, waiting for bloody marys (in the church…). On another side, Nikima and other dancers were spread out on a picnic cloth, with food and clearly in a social situation as if on a raft of park. On the stage a dancer executed a rhythmic and sinuous choreographic phrase that kept repeating, never dominating but creating a hypnotic effect. To the side a video played an astronomical-seeming image of rippling light, water by moonlight on the surface of a lake. And when I turned around, a final surprise: a group of dancers on a high balcony meant for lighting or technicians. Right away, I felt the power of her situation, proposing varying forms and strengths of engagement, focus, and activation, an invitation to be with, an “intra-action.”

Later, Nikima developed this expansive framework of a piece further at LUMA Westbau in Zurich, and this time I was part of it, at her invitation, serving hot dogs with many condiments. Then it evolved further as part of my Weekend Guests program at the Whitney and later in Shanghai at the Rockbund Art Museum, and at the Villa Empain in Brussels. At all of these, I witnessed the subtle combination of atmosphere and alternately lightening and darkening presence, that make up her “socialities” as she calls them, the word suggesting the more comprehensive situational emergence of her works than a focus on a presentation in front of you. If stage performance is a 2D one-screen video game like Pong or Ms. PacMan, Nikima’s works are not left-to-right scrolling games but more like first person hypnotic explorations of worlds. They are scores for not only movement, but for relations.

Unlike video games, Nikima’s works also consistently provide food or drink. She offers food within the context of her work as an object of proposed intimacy, an access point through which visitors can become integrated into the ecosystem. The protocol of eating food offered in a public space or during a public event is a collectively understood and shared form of social behavior, one that many people partake in without second thought. However, the food or drink that is placed within the context of her work is not there to quench one’s thirst but rather offers a shared social code inviting strangers to become part of the landscape; an object of engagement that proposes relations of unpredictable encounters.

The food is not only there to be consumed but it also holds its own weight, accompanying and contaminating the different elements, carrying animist generosity.

When I asked Nikima what it is like to dance in her work she compared it with a psychedelic drug trip, an altered state. The choreographed dance sequences—as a kind of portal into some other realm—are danced for hours. The sequences are structured recursively. The choreography consistently folds back in on itself creating something new and complex, like a snowflake.

As the sequences are danced, a transformation happens from dancer dancing the dance to dance being danced with the body as a medium. This kind of revelatory dancing asks for an immediate co-presence with the dance, the space, the environment, the people; a receptivity of all things, perhaps a meditation. Such work is draining, but draining in a way that removes inhibition, and proposes heightened sensitivity and attentiveness.
There is always that moment in a mushroom trip, after many wide eyed hours when eating food becomes a thought to reckon with. The way food operates within Nikima’s work is also a way of grounding oneself, coming back to earth, to the materiality of our being. It helps Nikima’s work engage in a play between the ethereal and the earthly: dances that are in the body, bodies that are no longer in control, but rather danced by the dance. 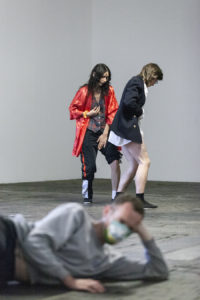 Last year, we collaborated again, this time in Long Island in a barn, on a piece called Holobio. It was a combination of natural elements, food in the form of a hot sauce made from peppers picked from a nearby farm, and a new score that could be done by dancers and non-dancers alike, that itself passed from everyday movement into choreography so evanescently as to make it impossible to tell the two apart, a tai chi of two lovers or friends interacting. And in another room she staged a found choreography, a slow dance, that was suggested to visitors, along with a piano being played a mantra-like verse from Natalie Imbruglia’s anthemic, affective Torn. Once again an autonomous zone was constructed for visitors to wander through, and this time to be part of in a dialogical fashion, watching and then hugging, and being together with, others. Here the seamlessness of an affective fabric becomes more consistent than the type of experience, whether watching or doing.

As Nikima’s interests continue to develop, she has become interested in meditation and in kung fu. There is a driving force animating her works that relates to universal connectivity. Rather than making critiques, as so many practitioners do in our moment, she constructs proposals. I believe we share an interest in works that are not purely or even primarily visual, but experiential and visceral. She recently wrote me about a new project, Crown Shy, explaining it was “a proposal for alchemy, dissolving the distinction between inside and out… No differentiation between consciousness and action; between our affect and us.” It’s a good way to describe the effect of her work on the spatial and the emotional, the visual and the affective aspects of experience.