Arnold Rüdlinger: The Dawn of the Contemporary

“Figurative art today has reached a point where in Europe and America a language is spoken that uses the same vocabulary. And it is not a learned vocabulary, but one that is created simultaneously.” (A. Rüdlinger, Tendances actuelles de l’École de Paris 3, Bern 1955)

A photograph taken in 1954 shows the director of the Kunsthalle Bern lying on a stretcher, smoking the usual cigarette while looking at a picture during the preparation of the exhibition Tendances actuelles de l’École de Paris.1 It is an eloquent image, which gives us an idea of who Arnold Rüdlinger was: a passionate person, a man of enthusiasm and with an amazing ability to convince, and above all a man who never stopped in front of anything. Always on the move, Rüdlinger pursued relentless research on new generations and art trends by constantly visiting artists’ studios. ‘Noldi,’ as his friends and acquaintances used to call him, used to cross by car or truck the roads of a Europe still damaged by war, in order to retrieve works to be exhibited directly from artists and collectors. He traveled to Paris, Munich, Amsterdam, and Venice, always assisted by his faithful friend Robert Burri. He was not afraid of change, to go against the traditions strongly linked to the abstract and formal vocabulary of postwar Switzerland. At the same time, he managed to give visibility to the central figures of the twentieth century who had not yet been given enough exhibition space. These were the essential qualities that enabled him to achieve what he did in his intense but short career (he died at the age of 48) between the Kunsthalle in Bern and Basel, two cities that owe part of their international recognition also to Rüdlinger’s intense, hard work and his revolutionary way of doing exhibitions.

Among other things, Rüdlinger was one of the main figures in a deep transformation that in the 1950s saw the transition from the centrality of cities like Paris and New York, the undisputed capitals of art, to the emergence of new major centers for contemporary art. This paradigm, based on the recognition of a plurality of centers, in which artistically relevant phenomena take place, is at the core of a renewed idea of art that focuses on the concept of modernity.

After studying German literature and art history in the years of World War II, characterized by the strong cultural isolation of Switzerland, at the age of 27 Rüdlinger became the director of the Kunsthalle Bern. In 1946 Europe had been devastated by the war and wrecked by the consequences of fascism, and Rüdlinger was the perfect character to bring attention back to the international character of art that had developed with the artistic avant-garde of the early twentieth century, and to assert a new progressive and innovative vision in the conservative context of Bern. In the early 1950s, Rüdlinger was very active in combining the artistic movements of recent years. He focused his attention on the diversity of the movements of the latest decades: from the Fauves to Cubism, from Surrealism to primitive painting2 and on non-European cultures.3 In that period he also maintained relationships with many artists in Bern who destined to become his travel companions, such as Meret Oppenheim, who will always be very close to Rüdlinger and who will be featured in two solo exhibitions which Rüdlinger curated in Basel. 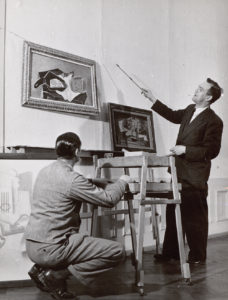 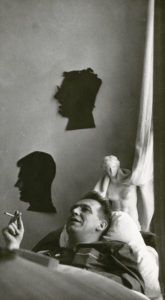 In 1953 he set up one of the most important exhibitions featuring Braque,4 whose work was at last put into a correct historical perspective. He later did the same for Léger, who would feature in a big solo exhibition at the Kunsthalle Basel in 1957.5 Interested in sculpture too, Rüdlinger organized an exhibition around the work of Julio González,6 highlighting the great influence of the Spanish artist on younger artists. Among them was Eduardo Chillida, who was given a large space in the exhibition, stood out. The importance of a multi-disciplinary dimension was established with the 1954 exhibition featuring Le Corbusier.7 The link between sculptural and architectural work was highlighted in a balanced vision, based on the continuity between different techniques typical of modernism.

The Bern period was definitely the most experimental and innovative, as Rüdlinger developed curatorial dynamics that allowed him to totally change the potential of the exhibition space. Compared with the Basel period, which included exhibitions featuring major international artists and a greater attention to America and new trends in art, the work phase held in the Swiss capital was clearly marked by the groundbreaking idea of the exhibition space as a device to ‘photograph’ contemporary art in its evolution.

Rüdlinger arrived in Basel in 1955 – among other things, the year of the first dOCUMENTA – where he started working at the Kunsthalle. In this period he created further international relationships and was primarily concerned with looking at what happens overseas. In his first trip to New York in 1957, he met, thanks to his close friendship with Sam Francis, who he met in Paris three years earlier, the leading artists of the postwar period. Forced to stop work due to a broken arm, he stayed at the artist Gottfried Honnert’s Broadway house, where he received enthusiastic visits from artists such as Rothko and Newman.

In 1958 he opened The New American Painting8 in Basel, which was the first major exhibition on American art in Europe. Although the curator was not totally convinced of the final list of artists, the exhibition, held in conjunction with the Pollock solo exhibition organized together with the Kunsthalle in Hamburg, was one of the most memorable of the decade and one of the major successes of the postwar period. 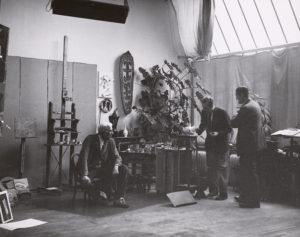 To create a contemporary dimension, in which art could travel, cross places and meet different audiences, meant above all building a series of work relationships with exhibition realities as dynamic as the one directed by Rüdlinger. Already since 1947 in Bern he started working with Willem Sandberg, director of the Stedelijk Museum in Amsterdam, for an exhibition of Ferdinand Léger. He also began a dialogue with Jean Cassou, director of the Musée d’Art Moderne in Paris, and Alfred Hentzene and Werner Schmalenbach of the Kerstengeselschaft, Hanover. Producing exhibitions together with several institutions had many advantages: the costs for the production of works, transportation and catalogs could be shared, but it was also possible to give greater international visibility to new artistic positions.

One of Rüdlinger’s most innovative choices is the inclusion of color pictures in the catalogs, published thanks to the Geneva based publisher Alfred Skira. He was aware that contemporary art should be communicated to the public directly, without influencing its perception too much orholding back from showing even its most difficult and controversial aspects. The visitors had to try “live” the emotions conveyed by the works of art without these being too mediated by the filter of guided visits or of press releases, which he always arranged unwillingly. Instead, his programs frequently included conferences by the major theorists of the time, from Michel Tapié to Werner Hofmann.

Rüdlinger was among those who recognized modernism as a truly international phenomenon. He had the ability to cross borders and to compare artists from different countries, through a modern conception of the exhibition space as an ideal device for the traveling of art from one museum to another. Unlike what was happening at the same time in other institutions, concerned with offering exhibitions that would historically depict art movements and artists who had revolutionized the history of art, Rüdlinger aimed at moving the critical center of gravity into the present, on the situation in progress. His closeness with young artists and movements that were then springing up at the time, his quickness in presenting research as it was taking place, the combination of different exhibition themes, broke with a tradition focused solely on an already established dimension. This is the way he conceived his exhibitions within a contemporary context, based on current artistic research and mutual trust between curator and artist.

With Rüdlinger, on whom there is not much of a bibliography apart from the wonderful book by Bettina von Meyenburg-Campell,9 the transition from modern to contemporary takes place. Something made possible also due to the respect and support of the board of directors of the Kunsthalle Basel, led by its enlightened president Hans Theler. The study of modern tradition is necessary to the understanding of the essential elements of contemporary art; the younger generations are investigated with the same care that is used with the masters of the past; the perspective on art opens from both the point of view of time and its geographical scope; and finally, the exhibition becomes the tool to track the changes in progress and place them within a contemporary critical dimension.