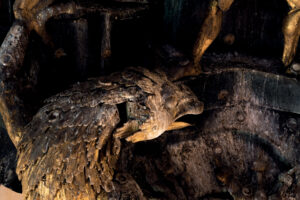 Today’s museum is no longer perceived as site of promise. After numerous publications dedicated to the future of this cultural model, our lens is bloodied and our gaze is troubled—the museum has come to increasingly reveal itself as a site of horror and confinement. Cyprien Gaillard’s exhibition takes place in two very distinct art institutions, both responding in specific ways to the charged concept of the museum. Palais de Tokyo is housed in the stripped-bare palace of the museums built for the 1937 world exhibition. As a form of readymade, the architects Lacaton & Vassal restored the building in a way that it appears as an untouched ruin, masking the effort to preserve it. The Fondation Lafayette, in contrast, opposes this form of preservation. Within the courtyard of a 19th-century building, Rem Koolhaas installed a performative exhibition floor, signifying ongoing production and movement in an advocacy of contemporaneity. Starting from the subject of preservation, Cyprien Gaillard produces his large-scale exhibition, entitled Humpty Dumpty, in numerous unfolding chapters of an urban investigation into museology. As the title hints, it follows a fable of restoration, drawing on the premise that architectural face-lifting can never be understood from a neutral perspective. One of the images, typical for the artist’s endeavor, is a film still showing the Eiffel Tower camouflaged by enormous scaffolding—a grid structure taking the iconic structure apart, blocking the view of the monument; or, as the artist would say, the scaffolding appears like an illness. This exhibition of Gaillard’s work occurs against the backdrop of the forthcoming Summer Olympics in what is a period of frenzied rebuilding.

At the Fondation Lafayette, Gaillard confronts two different readings of renovation. Using the institution as a site of restoration and by redirecting its funds, Gaillard repairs a public artwork, a large expressive, neo-medieval-decorated clock hanging close by in the Quartier de l’Horloge. According to the artist, this work by Jacques Monestier—with its dramatic depiction of a man perched on a rock fighting with a sword and shield against the four elements, air, earth, fire and water, represented by a bird, a dragon and a crab—fascinated him as a child. Despite the public prominence of the large work, the artist Monestier was hardly acknowledged by the neighboring museum Centre Pompidou and the legacy of the work was forgotten. Now, four decades after its placement in the postmodern housing development, Gaillard borrows the eccentric, defunct sculpture for his own fiction. During the show, the freshly restored clock will be hung indoors, in the museum’s central space, abandoning its time-bound function to instead, accompanied by an audio piece, run backwards. For Monestier, art was a manifestation of the techniques of craft and narration and it ended with Duchamp’s concept of the readymade. Here, paradoxically, Monestier’s work receives a second life by acting as just such a readymade for Gaillard. The second piece on view at Lafayette that echoes the theme of renewal is a seemingly minimalist work that contrasts to the golden clock: an enormous, shiny black block, recalling a solidified black lump of lava and containing asbestos. This daring material is based on a recent method for decontaminating the asbestos stored in the debris of buildings by bonding it in this black, glass-like material branded as Cofalit. Asbestos is an impalpable threat that infests much of the heritage of modern architecture, only here to become a form of material with provocative aesthetic potentials. Two figures depicted in a painting by de Chirico swallow down architecture, perhaps signifying the burden of heritage, in other words breathing in the asbestos. This painting is borrowed by Gaillard for the exhibition at Palais de Tokyo. Displayed in a sculptural, free-standing glass vitrine, the artist shows the work as repressive museology and it reflects a mirroring projection on glass. Entering this extreme device, the painting becomes preserved, elevated and imprisoned at the same time. On an urban level, the question of conservation and ennoblement becomes comparable to the work of Viollet-le-Duc. As a 19th-century restorer he would not only repair what was demolished or derelict but also (re)construct unbuilt segments, using his speculation of how medieval builders would have completed churches, for instance, had they had the possibilities. Viollet-le-Duc’s was a proactive handling of history, in stark contrast to the Romantic writer Victor Hugo, who admired the beauty of the aged and for whom it was the incomplete that fired imagination. Gaillard, on the other hand, is not obliged to choose between the one or the other. Restoring the clock by Monestier he makes it run backwards, not trying to fulfil its original intention. At the same time he is not nostalgic to the extent that his readymades acquired from the past are untouchable. Gaillard contrasts this museology of preservation with an acknowledgement of the broken, instead following new readings produced by the uneasy juxtaposition. His documentation of the restoration of the Eiffel Tower presents a doomed reading of the efforts to turn the city of Paris into a museum. In today’s era of increasingly eroding certainties, we perhaps don’t have the privilege of choosing between the positivist vision of Viollet-le-Duc or the Romantic vision of seeing beauty in what is ruined. Like the museums, certainties have become broken and Gaillard’s acknowledgement of the broken has to be faced. 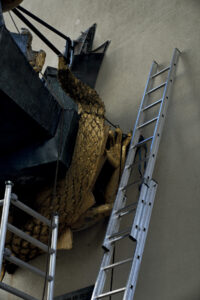 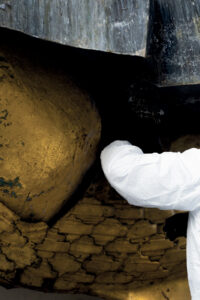 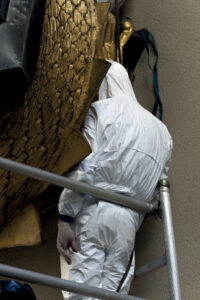 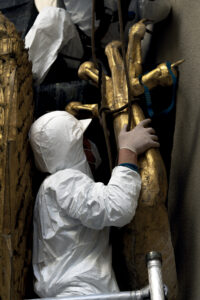 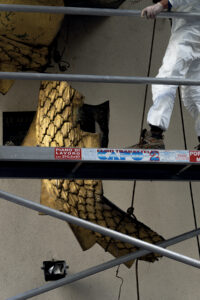 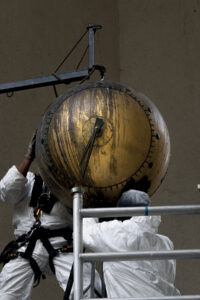 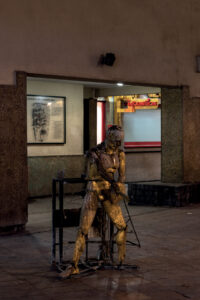 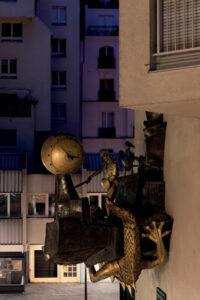 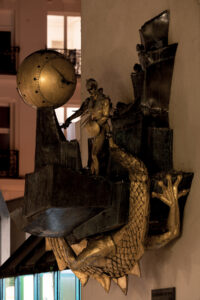 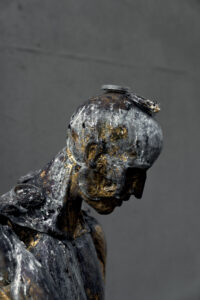 Fredi Fischli and Niels Olsen are curators based in Zurich. Recent exhibitions include Retail Apocalypse at the CCA Montreal and ETH Zurich, Sylvie Fleury at Bechtler Foundation, Deborah Joyce Holman at Luma Westbau, Girl and Doll at Thomas Ammann Fine Art, and Sturm & Drang at Fondazione Prada. Together they are artistic directors of NEXPO, an initiative by the Swiss cities for a national exhibition, and co-directors of exhibitions at the Swiss Federal Institute of Technology.