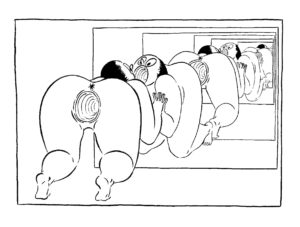 In a nightmare common to fits of insecurity, you walk the halls of your office or college campus, naked and unkempt. You recognize the reality of your hunching body and exposed privates, but only after they have been the focus of peer attention for an ambiguous amount of time. You’ve forgotten a step between one existence—the sleep state, in which the body is not under one’s control—and another—the professional performance, in which a person’s appearance proves just how much control she has over her body. Posture, makeup, hairstyle, and clothing give the impression of dedication to the cause of studied assimilation, and in this dream, you unwittingly rebel. The concern is not necessarily that it happened but that you did it unintentionally—you somehow let this happen, which means you have lost the essential part of your mind that compartmentalizes these two selves.

The artist Ebecho Muslimova invented Fatebe (pronounced “fat eebee”) when she had a day job at a corporate office. 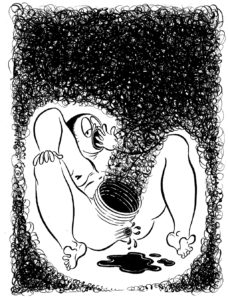 Fatebe was all ego, a version of the artist’s self sans inhibitions. In an immediate interpretation of the typical insecurity nightmare, she finds herself in public with no beautifying ephemera. But Fatebe feels no shame from this predicament. Instead, she finds pleasure experiencing her precariousness fully, splayed and physically vulnerable while expressing an almost arrogant joy from the amount of space she inhabits. An alter ego, Fatebe is allergic to elitism, and so the luxury of rejecting commercial work while one’s potential simmers is something Fatebe, the cartoon character, would scoff at if she could pause long enough to care.

Her own haplessness, an accidental disregard for societal norms, and a balloon-like body excite Fatebe. In pen and ink drawings and large-scale paintings of mixed detail, every misstep she takes proves she can take more, that the outcomes can’t hurt her pride if she has decided against any kind of preciousness. In lucid dreams, a fall can turn into flight. Similarly, accidental nudity can become intoxicating.

In much of the world, the amount of space a woman’s body takes up has an almost directly inverted relationship to the amount of respect she is rewarded. In Fatebe’s world, she appears to believe the opposite is true—and that exposure is everything. Sometimes, she is mural-sized, expanding across an entire building floor, her cartoon holes and nipples punctuating a clumsy pose. She dares you to call her unsexy, a joke, or unworthy of your attention. Even if you did, she wouldn’t believe it.

In early drawings, Fatebe illustrated a preference for the comedic over the expected, and the act of intentionally avoiding the goal of integrity. She morphed from a paper cutout perched on pencils to lovingly framed portraits. And then, in the tradition of ingénues, Muslimova was discovered as a real artist, right when she least expected to be. The work is probably best viewed at solo shows, in spaces where it doesn’t have to compete with art that demonstrates such dissimilar aims. The Fatebe series is brilliant in part because it presents itself as Fatebe herself does—as in, everywhere at once. Straddling all sides of an Approval Matrix, it is outside of one world, looking in, and inside a display case, but peering only at its own reflection.

A conceptual artist might have nightmares in which she accidentally sends her gallery a file of doodles instead of the work she’s been perfecting for decades, ruining her career by exposing her somewhat less serious side. Fatebe embraces this fear, even if she is blissfully unaware of an oncoming post-privacy age. Seen in the gallery context, Fatebe is more than a prank or a pastime; she’s subversive. Her brazen displays in cartoon settings are mimetic to the brazenness of drawing a caricature and calling it highbrow.

As her life continues, Fatebe is faced with newly articulated objects, stretched over landscapes that are populated with new temptations and ghosts. With adoring precision, Muslimova codifies the echoes of domesticity, luxury, nature, education, psychology, fetish, and art itself—images that have the capacity to haunt her. Nothing can deter Fatebe, though. From her gleeful smile we can assume that her convictions only gain momentum with every new opportunity to test them. 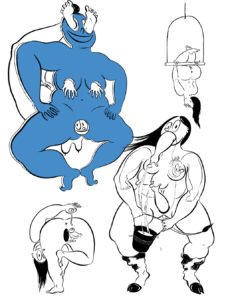 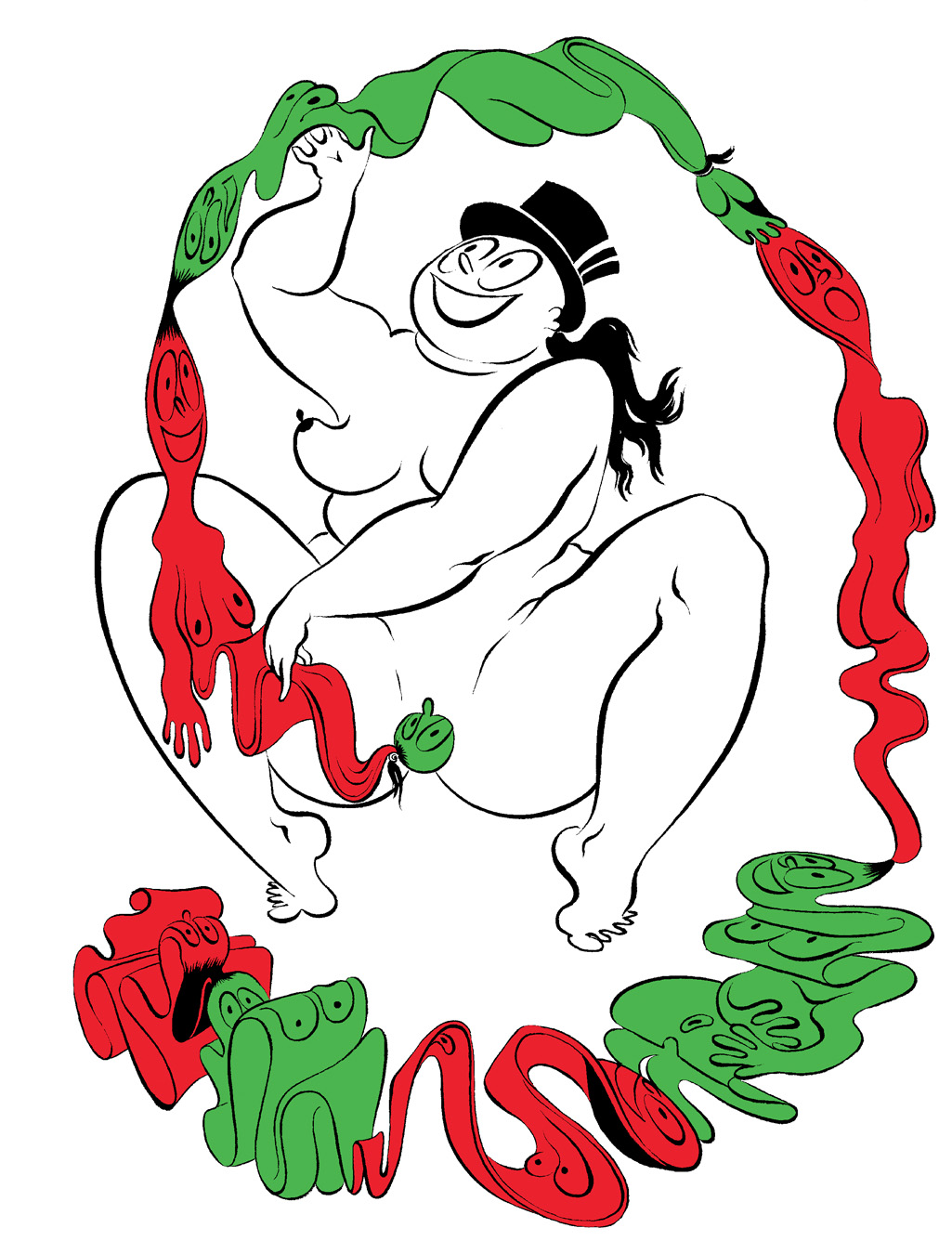 All images
Courtesy: the artist and Galerie Maria Bernheim, Zürich

NATASHA STAGG is the author of a novel, Surveys, and a forthcoming collection of stories, both published by Semiotext(e). Her work can also be found in the books, The Present in Drag by DIS (Berlin Biennale), Excellences and Perfections by Amalia Ulman (Prestel Publishing), You Had To Be There by Vanessa Place (Powerhouse Books), and Intersubjectivity Volume II by Lou Cantor and Katherine Rochester (Sternberg Press).