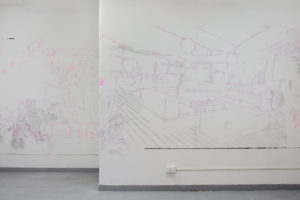 Paradisiaka is the first solo exhibition presented in Rome by artist Elisa Barrera, resulting from a prolonged research she conducted on a series of open–air discos built along the Italian coast between the late 80s and the 90s. Now largely abandoned or transformed according to new uses, these places were originally conceived as mythical gardens or Edens, and were decorated in an eclectic style, with arches, fountains, benches and pergolas intertwined with lush vegetation, creating utopian sceneries. With this project, Barrera questions the aesthetic, architectural and cultural values sedimented in these constructions and, more broadly, in the Mediterranean landscape encompassing them, and triggers a reflection that moves between club culture and ancient Roman frescoes, real and virtual spaces, personal and collective imaginaries.

The artist has realized a wall decoration which embraces the entire perimeter of Lateral Roma, showing a 360–degree view of an imaginary club. Entering the space, visitors find on their left the perspective of a bridge with small arches, while on the wall in front of the entrance there is a lounge area with some sofas arranged around a table; at the end of the room, on the left, one can see a bar counter, while another lounge zone appears in the opposite corner; all around, everywhere, there are plants, flowers, palms, fruit trees. Thin shelves with aluminum butterflies and a bench in the same material, with a shiny white cushion, complete the set up. The atmosphere is suspended, no human figure animates the representation, which does not capture a moment in time, but rather depicts a virtual space, abstract and out of time, the audience is invited to inhabit. 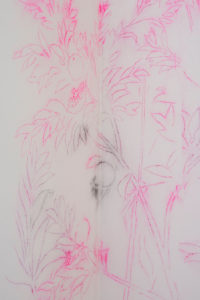 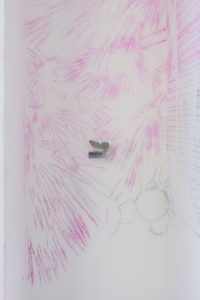 The scene arranged by Barrera establishes a direct dialogue with the famous fresco representing a garden in bloom that once covered the four walls of an underground room of the villa of Livia in Rome, the residence built in the first century BC for the wife of the Roman emperor Augustus. Now on view at the Palazzo Massimo museum, the decoration represents the oldest preserved example of one of the most important themes of Roman wall painting, namely the painted garden, which was especially popular during the Imperial period and was used to adorn reception halls and private rooms, as well as the interiors of monumental burials.

With their magnificence and generosity of details, painted gardens were aimed at creating views to enhance the joy of looking, and were an expression of a vision of the world and ethic aimed at celebrating the pleasure of life. Barrera reconnects with the themes and artistic codes developed by this tradition, while opening them up to new meanings and possibilities. Indeed, on the one hand, the installation as a whole takes up the topos of the locus amoenus (the place of delight), inherent to the painted garden, reinterprets it and enriches its imagery by relating it to the aesthetics of clubbing; on the other, the structure of the representation specifically questions the language of painting, and expands it towards other territories.

Rooting her practice in a processuality that leads back to the idea of art as craft, the artist elects the spolvero drawing—a technique usually adopted to prepare the base of frescoes—as a finished work. The contours of the plants, architectures and furnishings that articulate the panorama generated by Barrera are traced by lines made of small dots of pigment—pink, purple and black—that gently emerge against the white background of the wall. The lines reverberate in halos of color, enhanced by soft fluorescent glows. 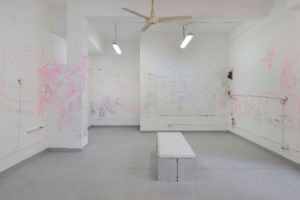 The entire depiction combines in a single composition visual fragments of various origins: amateur shots found on the web, photos taken by the artist or sent to her by friends and lovers. But all that remains of the original images is a residual vision, a subtle trace, a deliberately incomplete impression that requires to be (emotionally) filled up by the viewers. Similarly, the sharp outline of the butterflies and the rough edges of the bench also appear to be unfinished. The bench in particular, where the visitor is invited to stop, replicates the design of a famous museum seat created by the architect Wim Quist and distributed by the design company Spectrum: embodying an element that lies somewhere between the exhibition set-up, club furniture or garden decoration, the sculpture placed in the middle of the room turns out to be in a way the heart of the exhibition, or rather, the hinge around which the device orchestrated by the artist revolves.

If we are stars, this is paradise—the voice of a vocalist explodes across the dance floor. Paradisiaka is the name of the club the artist leads us to—a place of pleasure; a garden (according to the original meaning of the Persian word pardis, from which the Greek paradeisos derives) where the real and virtual spaces of our memories, our desires and our present lives meet; a common ground where we want to gather again, dancing and collectively imagining the day that will come tomorrow.