in conversation with Chiara Parisi 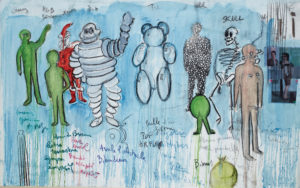 Chiara Parisi: I would like you to tell us about Château-Guibert, the Vendée village where you spent your childhood and grew up. There, you and your father planted a forest of hundreds of thousands of trees. This is a project you started working on very early, after completing your studies at the École des Beaux-Arts in Nantes. Where did this idea come from? Who inspired you from the past and among the people you were in contact with at the time?

Fabrice Hyber: Very young, I enjoyed walking in the valley where I grew up, in the Serrie area, within the commune of Château-Guibert. I liked to search for rainwater wells, increasing their flow, turning them into springs, revealing them and redirecting them towards rivers, turning them into streams. Even then I loved planting tree seeds, an action that seemed to me more relevant than just planting saplings. I was looking for soil to mold, minerals and stones in unreachable places. I recently discovered that a small stream which I created at that time now appears on maps: it did not exist before I gradually increased its watercourse, year after year. With my father—who shared his concern for the excesses of industrial agriculture with me since the 1970s—we became aware early on of the state of destruction of the surrounding biotopes. I would see corn fields producing non-edible fruits and whose soil would become gradually dry and lifeless. As time went by, I felt increasingly concerned by the effects of these green but toxic landscapes. While I was still studying, I decided to purchase the landscapes of my childhood in order to protect my parents and my roots, a decision which I formalized in 1993. I soon decided to share and transform this space into a place of positive and limitless experiences: a place of new life.

CP: How did you plant all these different types of trees—oaks, ash trees, almonds, hornbeams, elders, rowans—over an area of more than 70 hectares? Do you see this practice as a collective project open to the public?

FH: I have carried out several experiments to reforest the valley. Initially, the trees were planted on a plowed area of half a hectare, but this really stressed the soil, requiring a lot of workforce. The plowing of a furrow in which to plant seeds was too difficult to manage at the time. Together with my father, we decided that plowing and sowing was not the right solution. In the end, after three years of research and experimenting, we decided to make smaller furrows in the fields, and then plant the tree seeds after a few months, i.e. when the furrows were starting to heal. Thus, the sown forest was born. A sown tree is stronger than a planted tree. I still keep planting trees: the biggest challenge is finding the seeds. 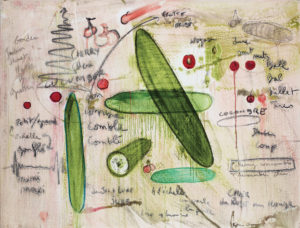 CP: In doing this, do you intend to create a way of life? That piece of land is where your home is and where new houses will be built—I am thinking of Hans-Walter Müller, Didier Fiuza Faustino, Philippe Rahm—together with new theoretical constructs.

FB: At the beginning I wanted to turn the forest into a place with no sale value, chock-full with a great variety of different tree species. Then, little by little, I realized that the place maintains itself, spontaneously. The forest, endowed with different species, is self-regulating, unlike what happens with the monoculture craze, which impoverishes the biotope. In fact, at the Serrie the biotope constantly renews itself. With every new challenge, I find an unexpected solution. My drawings and paintings are part of this quest for solutions. At the moment, the focus is on the animals that are hunted in the area… To be continued. My parents used to live in the valley, while I still do not have a place to live there; I dream of having a landing pad for a giant drone to land near the studio. I own areas close to and above the valley to accommodate gardeners and assistants. Since 1994 I have asked other artists to design projects for the house to function, and architects for projects to build their ideal houses according to specific features: the inclusion of bathrooms, the possibility of total closure and the absence of stairs. Faustino and Rahm designed several projects which are now in the Beaubourg collections and which I still have not been able to build—it is impossible to build on agricultural land. I am implementing a setup that will allow the valley to be turned into a place of artistic experimentations which will include well-being pavilions. Hans-Walter Müller created the bubble for one of my most important works: Traduction, le plus gros savon du monde [Translation, The Biggest Soap In The World].

CP: You would like the valley to become a “place of work, meetings, exchanges on arts and agriculture, where visitors can find art pieces and trees.” But the valley is also a place of passage for many different artists and personalities who come to see it.

FH: The valley is for me a place of constant learning and, as an obvious consequence, a place to produce my work and actions: it makes me aware of the possibilities of life, and I am always exploring its limits. I always need to get back to it. It is a model that many can appreciate, simply by sharing it. All means are possible for all types of visitors. I would like to turn this place into a place of well-being, a sort of spa, in which one may experience artworks in an ideal setting. Artists and researchers, writers and musicians, anthropologists and curators, friends in general, come and have their share, a moment of well-being. 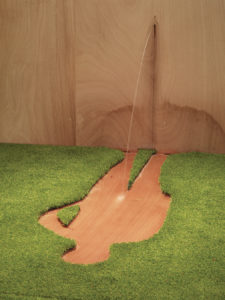 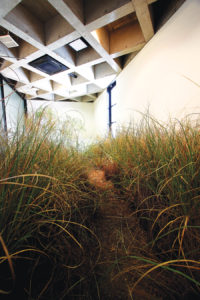 CP: What does it mean for a person who is always traveling like you to settle in such an area doing what you do, sowing trees, in a slow and highly random process?

FH: It is nice that time here runs slower. I often just let things happen on their own for months, without stepping in. I have full confidence in the “nature” that we have invented to push ourselves beyond our limits. Early on, since my first trips, I started gathering information on plants, meteorology, collecting seeds, images and proposals. I have been looking for places that have similar weather conditions to the valley: that is how the term “citoxe” (the inverse of “exotic”) was born, which is also the title of a series of my works. On the other side of the world I have found places with the same biotope as the valley. I think we should not be concerned about mixing tree species: if there are many and diverse types, all the better, and anyway here there are only those that support each other and can stand the climate. The trips are integral to the valley, which thus becomes an isotopic landscape.

CP: You are known to promote actions for art schools and companies to explore new forms of creativity and productivity together. Is this activity aimed at building a way to live in a degrowing society?

FH: From the beginning, I have been looking for tools which would allow me to pursue my aims without bringing about too much distress. There were many options, such as the scholarships offered by the French government to sell works and buy productions, but soon a different opportunity arose: going to companies and exchanging tools or skills. In 1994, I set up UR (Unlimited Responsibility), a company that allowed me to produce art pieces through connections between artists and business companies. In 1999, a network of European production sites was established involving Zerynthia, the Michelangelo Pistoletto Foundation and other realities in Germany and the rest of the continent. Eight years ago, this path produced a school called “Les réalisateurs,” which is a cross between an art school and a business school, aimed at creating collaborations between young artists and students of economics or management in Nantes, Paris, and in Rabat. Gradually, the artworks lose their quality of overproduced items and become integrated into the production and diffusion systems: thus, the gap between the social environments is increasingly reduced and the activities of each part involved improve at all levels. Degrowth is becoming a new frontier, whose forms have yet to be discovered: a great challenge to be taken up. 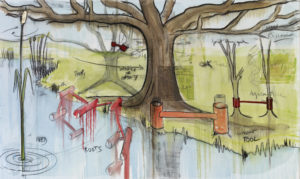 FABRICE HYBER (b. 1961, Luçon, France) is one of the most inventive and influential artists of his generation. Working across painting, drawing and installation, each work he makes is developed in response to another, becoming part of an interconnected non-hierarchical series. When he talks about his work, Fabrice Hyber likes to invoke “the enormous reservoir of the possible.” His interests revolve primarily around the power of art to give rise, shape and form to a potentially endless network of relationships between concepts, ideas, images, objects, signs, thoughts—art as one particular form of materializing the immaterial.

CHIARA PARISI is an art historian with a PhD from the Università La Sapienza in Rome where she also taught for several years. Curator at the Académie de France à Rome – Villa Medici, since 2017, she organized a series of exhibitions with leading female artists such as Annette Messager, Yoko Ono and Claire Tabouret, Elizabeth Peyton and Camille Claudel, Tatiana Trouvé and Katharina Grosse, along with a series of collective exhibition as Ouvert la Nuit and Le Violon d’Ingres. From 2011 to 2017, as the head of the artistic program at Monnaie de Paris, she presented outstanding exhibitions, including: Paul McCarthy, Marcel Broodthaers, Jannis Kounellis, and the unforgettable Not Afraid of Love by Maurizio Cattelan. Previously she was the Director of the Centre international d’art et du paysage on the Vassivière Island.