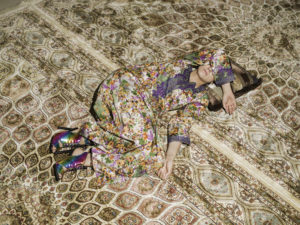 What does it mean to be considered beautiful in Dubai? Good skin, a healthy bank account, a first world passport? When I was growing up there in the 1990s, whiteness dominated.

Perplexingly so for a city whose matter-of-fact post-westernness is so seductive precisely because it was never colonized. But of course, in a place where everyone is from somewhere else, you’re going to end up with a lot of inherited baggage. And along the way, immigration patterns and the tides of globalization brought their own sets of beauty standards, most notably the rise of K-beauty in the last decade. In 2015, Emirati artist and musician Farah Al Qasimi set out to answer this question by sitting for a series of portraits at studios around the UAE. Her instructions to each photographer were simple. She asked only that they make her beautiful, leaving the finer details up to them.

They whitened her teeth and lightened her skin and rouged her cheeks, in a subtler version of so many pore-blurring beauty filters. They posed her against composite city skylines and graphic intimations of spring; they angled a cowboy hat on her and made her smile over her shoulder. Most intriguing are the different finishes of her skin, which seem to suggest the different backgrounds of the Photoshop technicians retouching her face. Dewy and glowy for some who might prize a chok chok look, and aggressively matte when (I suspect) South Asians, for whom being seen breaking a sweat is almost as bad as a tan, were involved. Many of these works are collected in the aptly-titled Body Shop but I’m reminded of an older work from 2014, Old McDonalds. Against a fleshy beige wall, tiling suggesting desiccated, dehydrated winter skin, the outline of the fast food chain’s golden arches faintly perceptible like stubborn post-inflammatory hyperpigmentation. In a place like Dubai, what is capitalism but an inflammation? 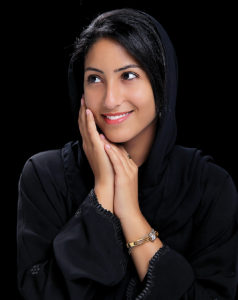 Last month I bought a Shamma Buhazza sweatshirt at Fully Booked, Dubai’s answer to Printed Matter. On the back is a greyscaled stock image of an open book and an Arabic proverb that translates to “books are a student’s best friend.” The proverb is repeated on the front in a standard left chest placement. But it’s the sleeves that are especially exciting. They feature circular logos from eight of Abu Dhabi’s international schools. The quiet violence and cultural displacement of this international school life ripples throughout Al Qasimi’s practice like a Java lake applet, finding its parallel in the nervous, hyper-militarized atmosphere ushered in by the Gulf coalition’s wars in Yemen and, most recently, the UAE’s strikes in Libya. It is captured most intensely in two photographs of lighting systems, in the unctuous ostentation of Chandelier Display (2018) and the frenetic flashing lights, fake flowers and Khyber-cyber palette of Dragon Mart LED Display (2018). One might be found in an Emirati family home while the other is shot at the titular serpent-shaped megamall, the largest Chinese trading hub outside mainland China: the febrile tension of the current climate exists somewhere in between the two.

Many of the logos on this sweatshirt, like the tripartite crests of the Cambridge High School (Indian system) or the American Community School, indicate a multifaceted approach to education. The Lebanese franchise International School of Choueifat logo meanwhile doesn’t even feature a name, just an olive tree and ‘1886’ but remains the most instantly recognizable. Choueifat schools run on a proprietary system that heavily emphasizes rote learning and repetition. They are responsible for a disproportionate number of artists and writers from the Middle East: Al Qasimi attended its Abu Dhabi outpost. Despite having neither art nor music lessons in school, she went on to study music as an undergraduate at Yale University, switching to visual arts in her third year. She later returned to Yale for an MFA, graduating in 2017, before completing a residency at the prestigious Skowhegan School of Painting and Sculpture.

Back in Brooklyn, where Al Qasimi is now based, winter is sulkily turning into spring. My skin is just beginning to recover from the one-two punch of overactive radiators’ face-blistering winds. I’ve been reading about ingredients and promises: acids and peels to exfoliate, humectants to hydrate, emollients to moisturize. Brighteners like niacinamide, kojic acid or the plant placenta of the Pin@y soap with the memorable tagline and familiar postcolonial sentiment, “Stay Young, Stay White…” which can be found emblazoned across the last pages of Body Shop. Farah Al Qasimi’s images work like skincare too. They slough off the surface layers of tired tropes and thinly disguised saviorism that congeal around any depictions of the Gulf today. They soothe with a beautifully textured, restorative richness. They’re warm and colorful, tropical in an artificial kind of way, like a papaya, mango or passion fruit body butter. Viewed alone, they have a tendency to feel fashion-y, but when presented serially or as a group, take on the air-clearing quality of palo santo. 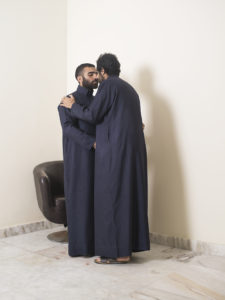 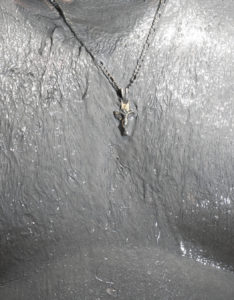 The most arresting image collected in Body Shop is the one on its cover, It’s Not Easy Being Seen (Self Portrait) (2016). A woman in a purple rhinestone-studded peachy headscarf and matching embroidered gallabiya frames her face with her hands, as if she is voguing. But her face and hands are covered by the chromakey green suit of a greenscreen fluffer, ready for any and all projections. It’s a fitting rejoinder to all the bromides you might expect to—and can easily—find about the Young Arab Woman Photographer who redresses stereotypes of petro-glamour, overwrites the western gaze, takes control of the gendered narrative (and so on), all while shouldering a hefty burden of representation.

More recent work extends this strategy of obfuscation and weaponized kitsch, most notably in the suite of images that comprised Al Qasimi’s solo at New York’s Helena Anrather last year, More Good News. Many of these, such as two men rubbing noses in a fond Bedouin greeting, are lovely in their captured intimacy. Another shot of two men shows an American soldier taking a phone call, face angled in a manner that suggests bad news. The second soldier’s arm grips his shoulder in a comforting or perhaps cautioning gesture that reminds the viewer that tendresse can be weaponized too.

Instead of gimp suits, faces are hidden by puffs of smoke or a lurid fleece blanket, the kind that is found in zippered PVC bags. One man is seen only through a close-cropped shot of his hairy chest, which is covered in viscous grey Dead Sea mud; a crucified Jesus on a chain provides the only color. Even falcon’s eyes are covered by a hood in the particularly medical-vibed Falcon Hospital 2 (Blue Glove) (2016), in which a disposable-gloved arm seems to hold the bird about the neck. Figures are further protected by being camouflaged against their environment, whether it is a man whose white kandura almost blends into white walls and bed sheets, or a portrait of Al Qasimi’s father, a study of marbled beiges and browns. Especially sumptuous is M Napping on Carpet (2016), which depicts a woman in a busy floral gallabiya and iridescent peep-toe booties disappearing, arm over face, into a similarly patterned carpet.

What are they protecting themselves from? The long arm of the state, which has always been listening but only more recently developed the technological infrastructure to do this effectively? Although it has been levied more broadly in the wake of the Arab Spring, these surveillance technologies have long been a feature of Al Qasimi’s family life—her father was a diplomat. Their audio artifacts, which make it apparent when someone is listening in on the phone, were recorded and incorporated into a performance at the gallery during the show’s run, which also featured an Instagram-crowdsourced doppelgänger—Indian-American and not that similar looking but brown enough that they would do. Also in the show was the remarkable silhouetted Gurdwara Nanak Darbar Sahib (Kansas) (2017)—taken in the aftermath of the 2017 Olathe hate crime where a white navy vet mistook two Indians for Iranians, killing one. Depending on who’s doing the shooting, specificities don’t matter.

ARAH AL QASIMI (b. 1991, United Arab Emirates) lives and works in New York and Dubai. She works in photography, video and performance. Her work has been featured in exhibitions at: the San Francisco Arts Commission; the CCS Bard Galleries at the Hessel Museum of Art, New York; Helena Anrather, New York; The Third Line, Dubai; Jameel Arts Centre, Dubai. Al Qasimi received her MFA from the Yale School of Art. She has participated in residencies at: the Delfina Foundation, London; the Skowhegan School of Painting and Sculpture, Maine; and is a recipient of the New York NADA Artadia Prize and the Aaron Siskind Individual Photographer’s Fellowship.

RAHEL AIMA is a writer from Dubai who is currently based in Brooklyn. She is a contributing editor at Momus and Special Projects editor at New Inquiry, and was a founding editor of THE STATE. She is currently working on a book about color and futurity and a collection of exhibition fiction set in Dubai.