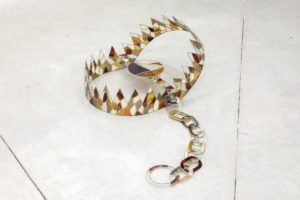 Fin Simonetti carved a pair of earplugs out of Spanish blue alabaster for a show last March called Pledge (Company Gallery, New York, 2019). It’s impossible to look at the bell-shaped duo and not imagine their cold hard marble pressing into your ear canals. Like a slapstick joke that ends in pain (slipping on a banana peel or breaking through a chair), it’s a simple material substitution (foam for stone) promising intimate discomfort. The sculpture’s foil came later, included in another solo exhibition, Head Gusset (Cooper Cole Gallery, Toronto, 2019): a bear trap made out of molded stained glass like a Tiffany lamp.

Again it’s the wrong material for the object’s function. If a paw were to set off the snare, the glass would surely shatter. And so the point is futility. 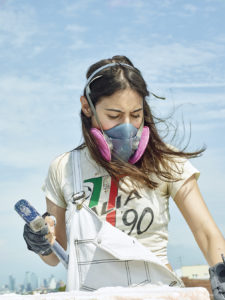 The work that goes into making these totems of futility is also significant. Sculpting marble and stained glass is painstaking labor. Embedded in these works is a process of effort and anguish without clear purpose or resolution—Ruskinian self-amelioration meets Sisyphean task.

Simonetti is not one to shy away from detail-oriented and demanding labor. Several years ago her most iconic works were figurative red-ink ballpoint pen drawings, which The New York Times called a “technical tour de force.”(1) Their subjects included pastoral scenes of young women and animals suffused with suggestions of bondage and BDSM. There were more banal objects too: lazy boy chair, deflated bouncy castle. As the Toronto-born, New York-based artist’s practice has shifted from 2D to 3D, drawing to sculpture, she’s also found a cooler color palette. Her first marble sculptures, featured in the solo exhibitions Is Path Warm? (Good Weather, North Little Rock, 2017) and Lifemorts (Interstate Projects, New York, 2017), were primarily pink alabaster. Then Pledge was all blue—both the marble sculptures and stained glass windows layered over sun-bleached barbershop hairstyle charts. Most recently Head Gusset and Keeper 2 from the group show Dog Days (C L E A R I N G Gallery, Brooklyn, 2019) feature frosted glass soldered with silver as well as nostalgic 1970s gold and brown. The heat of those initial red drawings has gradually become icier. The pink alabaster dog parts in Is Path Warm? looked like frozen meat. 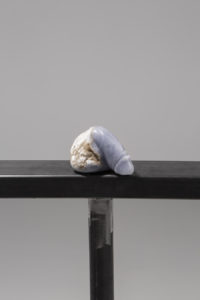 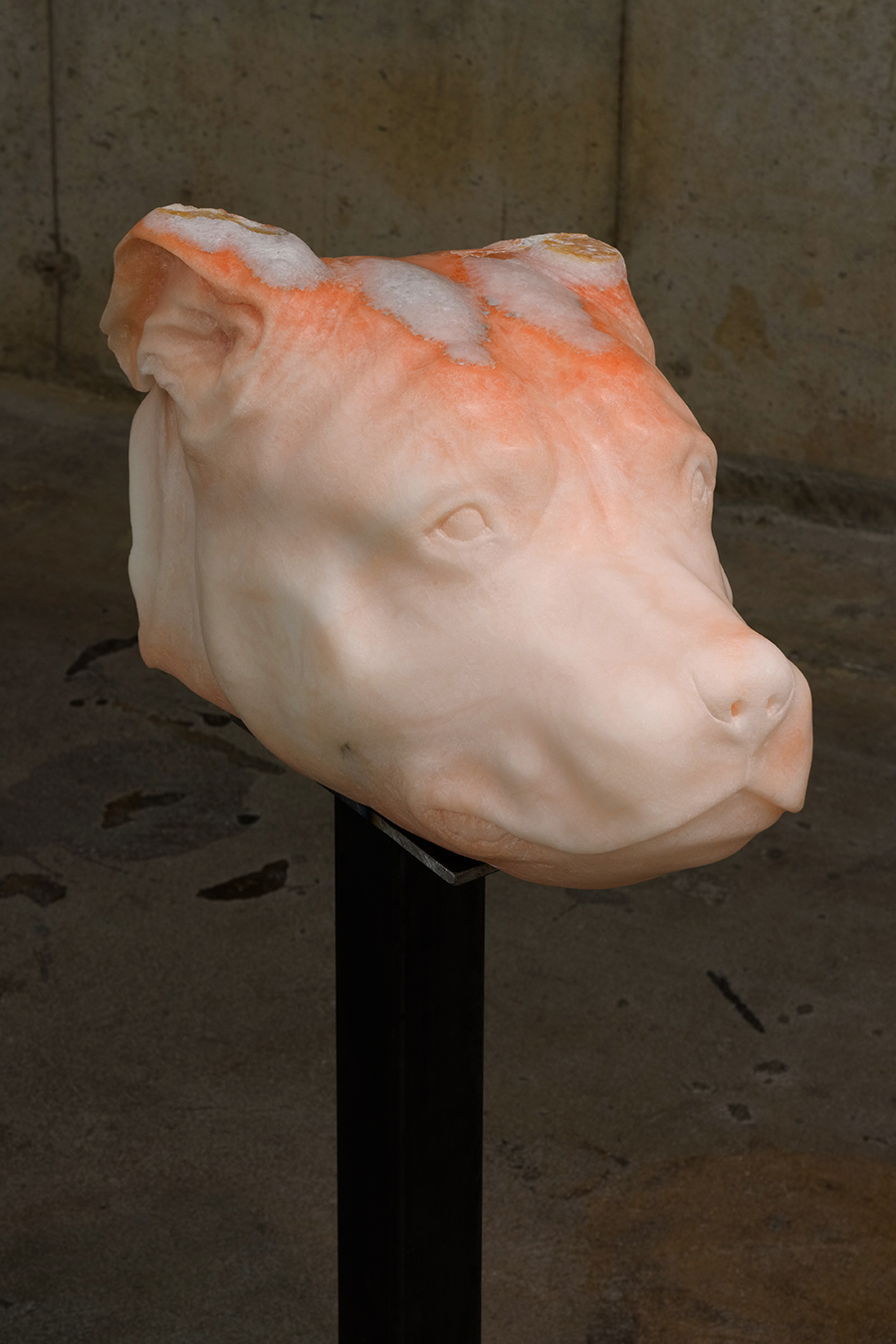 In the most recent phase of her practice, masculinity has become a central focus of Simonetti’s work. Pledge includes sculptures of implicit (candle) and explicit (penis) phallic objects as well as video of competitive weightlifters’ peak-effort grimaces. Lifemorts features videos of male athletes crying. Pit bulls—never the full dog but a disembodied head, leg, or paw—are a frequent subject, a breed of dog closely associated with performances of hyper masculinity. Over and over again Simonetti gestures at violence and pain as well as prescription and containment. Traps, locks, railings, patterns, and charts suggest how ideas of gender are ordered and imposed as well as the hurt male subjects inflict and experience as a result.

Head Gusset comprises stained glass bear traps and stained glass wall works based on teddy bear patterns, the cuddly stuffed animal dissected into its 2Danatomy. For this show, Simonetti took inspiration from the origin story of the teddy bear, a 1902 hunting trip in Mississippi that President Theodore Roosevelt attended with the state’s then governor Andrew H. Longino. So the story goes, partway into the hunt, Roosevelt was the only member of the party who hadn’t killed a bear. The hunt’s guide Holt Collier, a black man who was born into slavery and lived in bondage for the first 15 years of his life—this hunt was taking place only a few decades after the emancipation proclamation—subdued a bear and tied it to a tree to give the president an easy kill. Roosevelt’s refusal to finish off the wounded animal became a meme of the day. Political cartoons morphed into stuffed toys dubbed “teddy” a nickname the president hated. The bears became a popular gift for women and children underscoring the interpretation that the media event had become a way to admonish and emasculate the president.

Simonetti’s interest in unpacking this violent history of a culturally beloved comfort object has something in common with her interest in pit bulls, an animal we position as both pet and threat, and police dogs, a phenomenon when “man’s best friend” becomes weaponized. In 2020, Simonetti plans to sculpt three dog heads representing these militarized pooches. This year, she’s also hoping to adopt a dog with her partner and sometimes collaborator artist Michael Assiff.

The canine theme in Simonetti’s work spans a stained glass and aluminum dog house, Keeper 2 (2019), featured in the group show Dog Days. Like the stained glass bear traps, the medium’s fragility is at odds with the object’s implicit function. A dog would shatter this glass sanctuary, the elongated shape of its peaked roof suggesting a church as much as a dog house. Reverse the letters in dog and you get god. Both figures are humanity’s supposed protectors. I think about a quote from an Eileen Myles book: “The dog feels a fence in the man.”(2)

Why do we create a barricade between ourselves and others and when is security anything other than performance? Lifemorts included window decals in the shape of shields announcing alarm systems that don’t exist, fake burglar deterrents nonetheless real in their effect. The central architecture of Pledge was a welded-steel railing, pointless in how it zigzagged through the gallery, choreographing an arbitrary path but not safeguarding anyone or thing.

This latest phase of Simonetti’s work has come after her father’s death. But it’s complicated. She grew up estranged from him and had just begun building a relationship when he passed. Since then, she learned the craft of stained glass from his brother, her paternal uncle, whose commissions are mostly religious. While it’s certainly part of what she’s exploring, it’s too simplistic of a read to just see Simonetti’s work as interrogating fragile masculinity. There’s a larger meditation on our desire for protection and safety and how it can manifest in exclusion and separation, the cultural scripts that while maybe well-intentioned frequently cause harm, and how our collective ideas about animals say nothing about them and everything about us. But even beyond these conceptual concerns the most compelling part of Simonetti’s work is that it brings into focus that the process of artmaking is defined by compulsion without resolution.

WHITNEY MALLETT is a New York-based writer and the deputy editor at PIN–UP Magazine. She was selected for AICA-USA and Andy Warhol Foundation’s 2020 Art Writing Workshop.