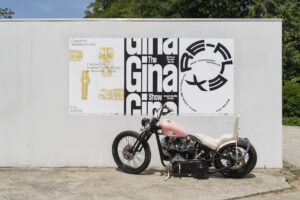 “Art is another deeper stuff, but we dance the song. Hallelujah.”


Brazilian artist Adriano Costa deals intensely with reality, using its tragic state. The artist prefers to use the term fatality in this context. In his exhibition at City SALTS Costa talks about borders and paradoxes such as beauty and ugliness, or the reason for creating art and the visibly decrypted system he is obsessed with.

Costa’s bronze forms are cast from casts of old sculptures by the artist, giving the exhibition its name: Cemitério, Cemetery. Costa works with the dead part of the artwork, the dead side, or what in theory has to be the dead side. The golden color is dirty and unpolished, too, reminiscent of the old, the realm of death.

The artist thinks his cemetery as sacred and profane at the same time, messing with what is desirable with the stillborn aura of the installation. It shows his at-tempt to discuss aesthetics by setting himself apart from all what is calculated. The sculptures are the result of antagonistic forces, relating the inside and the outside. What is cast is discarded, and the waste is exhibited.

According to Adriano Costa, the key to Cemitério is offered by the Chinese Tao Te Ching, which ultimately aims at lasting harmonious coexistence, and thus nothing less than world peace. The classical text attempts to illustrate how an-tagonistic forces must work together for a thing to exist:

That is why it will last forever.
Tao Te Ching, chapter 2
English version chosen by the artist
In addition to other works and various smaller and larger interventions in the ex-hibition architecture, the artist collages scenes from the video clip “Piece of Me” by Britney Spears (2007) with pieces from the film scores of Ben Hur (1959) and Caligula (1979). Repeatedly, as an hynotic and pathologic mantra. The pop star is turned into a symbol of fate. In this, the artist thinks about himself as an ingredi-ent, out of his control, “floating in a brew when things like money, success, illusion, floppiness and death are the plat du jour.»

He elevates the once golden girl Britney Spears to a product of a heroic destiny and places this fallen angel in the mythical place he believes she has reached. Spears – star, object, but above all soul – belongs to the same world as his sculp-tures of false gold. This world is a phantasmagoria, an illusion in front of an audi-ence: tragic, romantic, poetic, and fatal.

Adriano Costa follows Britney Spears on Instagram, and always he has the feel-ing that she knows him personally. After all, the cemetery he created is his own: «I love it! It’s my life! It’s Art Basel. We know art is another, deeper stuff. But we dance the song. Hallelujah.” 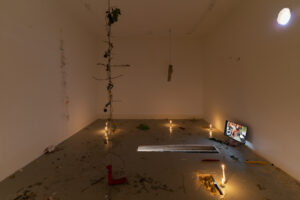 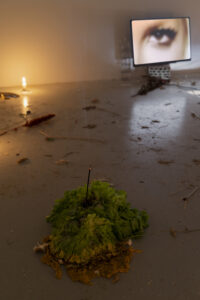 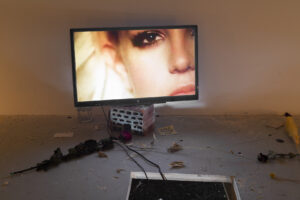 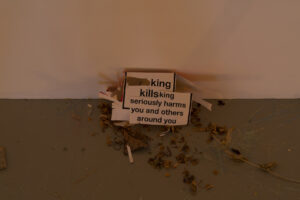 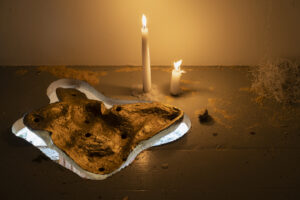 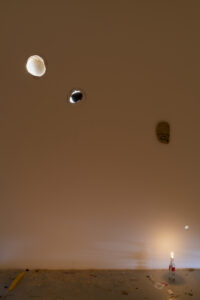 A young princess was a thousand times more beautiful than the daughter of the witch Rumpelplums. Because of this, the witch cast a curse on the young princess, condemning her to a life without laughter and perpetual tears. Only a prince could free the ensnared heart of the princess. We unfortunately do not know how long the princess has been crying. As you attempt to free the heart, you should not cry immediately if after several attempts the heart is still ensnared.

Remember the last time you played a game? Was it chess maybe? Cards? Or table tennis? Did you exert yourself rather mentally or physically? Did it bring you pleasure? Or anger? How did it feel when you won or lost? Did this resonate in your head or in your heart?

We know from children that they intuitively learn essential things in life through play. Play helps us to learn how to move within social environments, how to be in community and how to communicate with each other. Basically, as adults, we con-tinue to play and do this for similar motivations. Parlor games. Love games. Mind games. Power games. Word plays. Gambling. All require amounts of courage, skill, strength, endurance, intelligence. By playing the game we demonstrate to each other what we are made of. At the same time, we are driven by the engines of a social system that is primarily geared towards performance, competition and profit. The ambivalence of the game: The winners get the whole cake. The price, on the other hand, is not to be discussed.

The exhibition THE GINA SHOW can be called a “game show” with a wink. A bull’s eye. A deliberate joke. But the hattrick of the first name in the title remains superficial and would hardly have sufficed as a final criterion for the selection of this team up. The incentive for the group exhibition was the interest in the artistic practices of the three Gina, who are characterized not only by very sensitive handling of materials and formal languages but also by a preference for cultural history and narratives.

A common feature is the reflection of social phenomena and dynamics that comes to bear in the works. With the literally playful elements of the works uni-ted here, themes emerge that are capable of touching and moving. In Gina’s art there is no fear of dealing with emotions and just as little any hesitation to look at things in everyday life through “naive” glasses in order to critically question what is closely perceived. This artistic strategy may well be called a game changer in today’s times.
The exhibition space of the double garage finally turns into a kind of small par-cours, where movements and emotions generated by the stories can be mentally and also physically recreated. At first glance of the objects, this may seem quite easy, yet it has tension and depth, even allusions to interpersonal abysses. The works tell metaphorically of human passions.

As in Proenza’s case, they speak about the gravity of solidarity in teams and communities. Or, in the case of Folly, the works are dealing with captivating affairs to existential self-sacrifice. Elsewhere, Fischli parodies symbols of domi-nation and deconstructs them in conjunction with consumerism. The three small Antigone figures hanging on ribbons in the entrance and exit keep the room firmly in view. They are three portraits in profile, representative of the three Ginas. The silhouette of these sculptures made of wood, porcelain and fabric is remi-niscent of the toy Bilboquet, which came into fashion in France during the 16th century, and which above all required skill. In a modified form under the name Hibuki the object served Japanese women as a handy weapon for self-defense.

The fate of Antigone ends tragically according to the poets of antiquity, but apart from that it is the story of a strong-willed woman who did not bow to patriarchal rules and laws, but asserted her own ethical standards. Preserving a form of self-determination under the given circumstances also applies to the protago-nists of this exhibition. Playfully, as if pulled out of a sleeve.
Welcome to THE GINA SHOW. 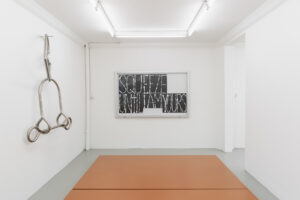 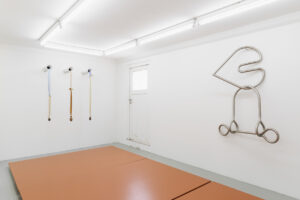 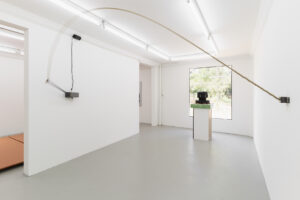 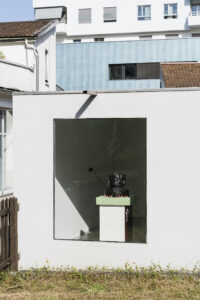 Jean Katambayi Mukendi grew up in the southeast of the Democratic Republic of Congo in Lubumbashi, the “capital of copper”. His father was an electrician, his mother the secretary of a metal extraction company, which is why Mukendi was surrounded by all kinds of metals from an early age. A passion for logic, geometry, mechanics and electricity now defines the art of the autodidact who, after gradu-ating as an electrician and studying mathematics, remained “puzzled by creation” until he met the art world a few years later.

Mukendi seeks to understand the qualities of the materials and tools that are available or that he happens to find, in order to get the best out of them. This includes integrating production waste: Nothing is lost, nothing is newly created, everything is transformed. Mukendi’s works convey a political pragmatism. Also because they are inhabited by the artist’s everyday life in his immediate environ-ment.

Probably his best-known series, Afrolampes, shows light bulbs of all kinds drawn on paper with a self-made compass, sometimes assembled with 3D objects. They are a winking reminder of the fate of millions of residents of Lubumbashi, the artist’s hometown, whose nights are often lit only by candlelight because of prob-lems with electricity distribution. European energy-saving lamps are of no help.

Humorous irony permeates Mukendi’s work. Asked about this by art critic Piero Bisello, the artist recalls a time before his international activity: “When I worked as a math teacher in secondary school, people asked me why I was making all these jokes with my students. Math was supposed to be serious. I took it differently and it served us well.” His artworks are similar.

“They might be ironic, but they address serious matters – like the responsibility of
foreign countries in the Congo.”

Jean Katambayi Mukendi was not only a math teacher, but is also a licensed electrician. Like his four siblings, he attended one of the technical schools that ensured that European companies never lacked cheap labor during the Belgian occupation. Accordingly, the artist is interested in technology less in its function than in its context. Many works are inspired by the technical drawings of those companies that exploit his region. The source material of everyday life expands far beyond the personal horizon into worldwide responsibilities and currently reflects not least the unjust Covid vaccination policy on a global scale. More personally, the artist comments on his bridging to art. “My mother taught me that I had to study to understand life rather than to understand electricity.” Thus, Mukendi’s work offers not so much technical instructions or mathematical solu-tions, but rather commentaries on life.

Jean Katambayi Mukendi’s performance on the opening evening (7:30 PM) re-mains in the exhibition as a sculpture: the artist writes mathematical derivations on a car windshield attached to the water tank before having the windshield smashed by an exhibition visitor. Pare-Brise, 2022, (Windshield) tells the fictional story of a broken car windshield, shattered by an accident, the course of which the artist-mathematician has subsequently deciphered in writing on the object. The fact that the production process took place in exactly the opposite way dis-solves the boundaries between incident and accident, between staging and loss of control. When the cracks seek their way through the glass like rivers.

The same loss of control is embodied in the work Re-Flex, 2022, in the center of the room. Mukendi calls the work itself a water tank. Clean water, along with electricity, is another inconstant in Lubumbashi. Through its process of creation, Mukendi’s water tank represents a counter-statement in a world riddled with pre-dictability and pigeonholing. The artist pours a mixture of glue and color pigments into a plastic tube filled with trash and lets the river carve its own path. Choosing its own colors. Codes dissolve and recompose themselves. All calculation disap-pears, the incident becomes an accident, the artist gives up all control. 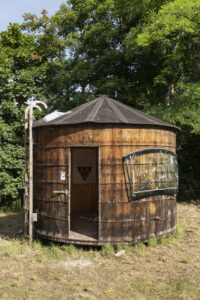 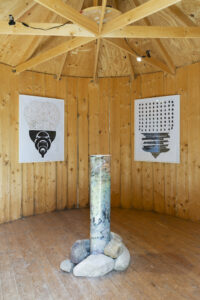 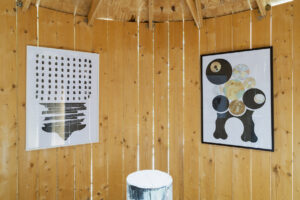 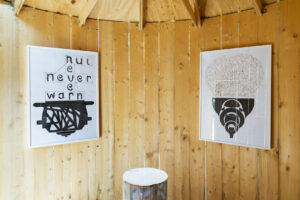 All Photos by Gunnar Meier