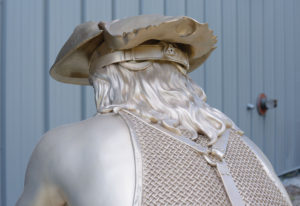 Donning clip-on suspenders and a wide mesh tank, Frank Benson’s newest sculpture, Castaway, is fashioned with a puzzling set of accessories. His tattered boots display worn layers of leather that erupt from the surface like a second skin. Attached to his thickly tressed head, the shell of a sizeable horseshoe crab is rigged into a remarkably sophisticated helmet. And between his squatting legs, a barnacle-covered bottle of laundry detergent is positioned within his grasp like a surrealist handbag, or a primordial souvenir. First commissioned in 2013 as a public artwork by Nuffield Health in Bristol, England, Castaway was inspired by Alexander Selkirk, an 18th-century Scottish privateer who was marooned on an uninhabited island for four years and four months, and is also said to have inspired Daniel Defoe’s more infamous literary protagonist, Robinson Crusoe. After five years in limbo, the work will finally be permanently installed at Goldney Gardens in Fall 2018 and shown at the Astrup Fearnley Museum (Oslo) in December 2018.

Made using a combination of digital photography, 3D scanning, sculpting, and printing technologies, the work is the fourth in a series of figurative sculptures that Benson has been producing for the last thirteen years.

Yet, unlike any of his other works, Castaway is modeled, not from one body, but two: a real-life acquaintance of the artist; and a stock 3D model purchased on Turbosquid. Available online as a “realistic male model,” the latter readymade form has since been posed, styled, and coiffed, but now exists as a kind of crypto-self-portrait that further traces its unique genealogy of virtual and actual origins. While his current ensemble conveys an island-stranded condition, in light of Castaway’s virtual beginnings, they also enact structuralist puns, pointing to the very digital tools and techniques used to generate the artwork. Rigging and mesh and skin might characterize certain sartorial embellishments but they also make up the standard topological vocabulary used to describe the anatomy of 3D forms. Terms that also signal the subsequent quality of a 3D object’s realism and the ease in which it might be digitally posed, sculpted, scaled, and placed into different environments. It is through these sculptural and linguistic cues that we can begin to locate the most compelling aspects of Benson’s artistic practice, which engages contemporary modes of digital production, not only as a set of tools, but also as a central subject in his work. 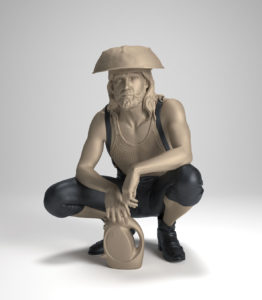 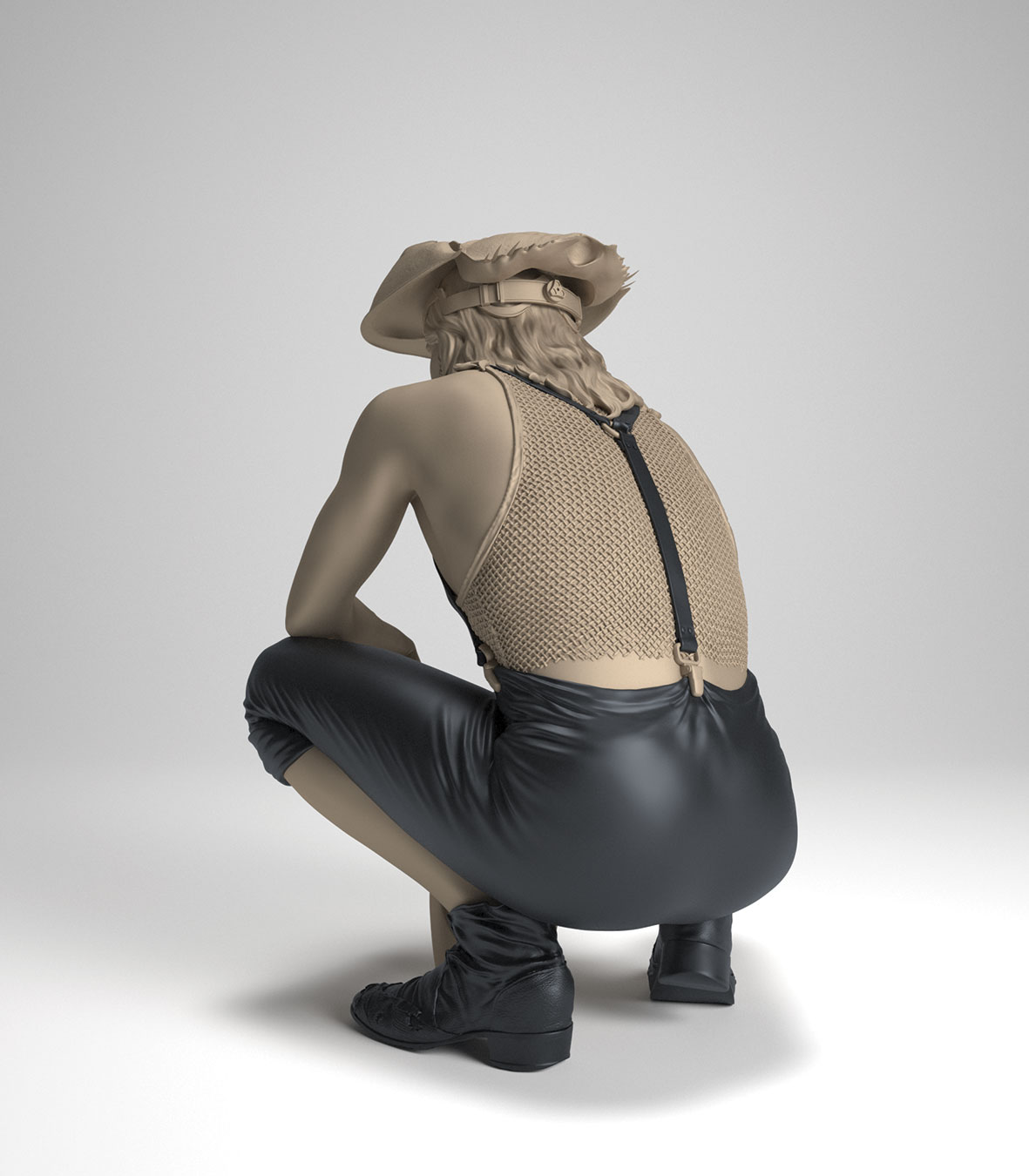 These themes often manifest in Benson’s shrewd combination of contemporary cultural iconography with more classical approaches to sculptural composition. If empty crab shells and beached consumer plastics are reminders of rising ocean waters and the dire state of climate change, in Castaway these contemporary signifiers also direct viewers to a secondary set of ecological and epistemological questions. In the subtle integration of natural forms with man-made constructions, one can draw an analogy with the ways in which Benson’s technological processes integrate real world spaces into computer-generated ones. Meticulous and highly technical, the production of Benson’s recent figurative sculptures has involved a prolonged process of fits and starts wherein each work moves through a series of software programs and virtual simulations, each with its own set of digital inputs and outputs. ZBrush—Benson’s 3D modeling software of choice—uses a proprietary “pixol” (or 3D pixel) technology that can simulate lighting, color, material, and depth to such a degree that even the force of gravity can be replicated and modified in the slightest variations. In these CG worlds, the laws of physics are employed with the stroke of a digital brush, bending and blurring space in ways that challenge the binary distinctions between the virtual and the real. Such screen-based simulations are no longer merely imaged surfaces but highly precise data that can account for depth, matter, and movement. 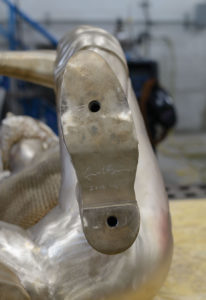 Hito Steyerl has located the newly complex landscape of digital graphics software within what filmmaker Jalal Toufic identifies as a “fractional dimension”—a space between a two-dimensional surface and a three-dimensional volume; Steyerl has also described this as a “transitional space that allows people to enter and exit images.” Like many of Benson’s sculptures, Castaway directs us to these fractional dimensions by way of its fissured surfaces—through blistered leather, thatched barnacles, and chainmail tanks, highlighting forms and layers that mediate the body’s interior and exterior spaces. Ultimately, these sites frame our more visceral dimensions, the fleshy and biological textures and materialities that are decidedly absent from the digital universe, except through imaged simulations. The more painstakingly real the details of Benson’s figurative sculptures, the more their unreal qualities are thrown into relief. In Human Statue (Jessie) (2011)—a life-size bronze modeled after artist, dancer, and musician, Jessie Gold—Benson reveals the austere and mechanical valences of digital reproduction by depicting Gold in the most rigid and enigmatic of poses. She embodies what the artist has identified as an “inscrutably abstract” composition. Posed with wide-set arms clearly meant to hold the large, circular vase that has been placed next to the pedestal below her, Jessie’s expression remains resolutely obscure behind her opaque vintage Versace sunglasses. Instead, one notices the pores of her skin, the veins in her feet. Benson presents us with a convincing representation of the female body while simultaneously confounding our ability to read the narrative and symbolic context he has placed her in. The mimetic impressions of her clothing and porous skin only succeed in momentarily seducing us. Soon enough, our attention is diverted to the body beneath the undulating folds of her dress; to its absence of breath and absolute stasis. In her stillness and dichromatic cool, Jessie appears as a kind of three-dimensional photograph.

Benson has previously expressed an interest in “collapsing the space between sculpture and photography,” namely, by refining his 3D renderings so that they are indistinguishable from photographs of his final cast sculptures. In an upcoming publication from Three Star Press, the artist will reproduce his entire series of figurative sculptures as a collection of printed images that will bring him closer to this goal. Recalling Duchamp’s epochal Boîte-en-valise from 1935-1941—a monographic catalogue comprised of sixty-nine miniature replicas and painted reproductions—Benson’s more modest version will include reproductions that are not sourced through photographic means (that is, with a camera) but are directly printed from 3D renderings posed in Benson’s virtual studio. Rather than depicting the sculptures as singular, rarified objects, the images offer a contextual perspective onto the works’ more “fractional” and elastic manifestations. Eschewing a more traditional approach to documentation, we are reminded that his figures exist, above all, as formless data. Here, notions of origin, and an “original” work of art resonate differently from Duchamp’s “box in a suitcase.” The latter was completed at the height of WWII, when the artist was fleeing France for the US. It is noteworthy that Duchamp turned to both a museological compulsion for collection and photography’s serial modes of production during a moment when geopolitical displacement was imminent, prompting us to ask why Benson has chosen a similar outlet for his sculptures. We might return to Castaway, whose permanent state of exile now seems to reflect the inherent contradictions of our globalized art world; where the number of international triennials, biennials, and art fairs still proliferate under a bleak flag of postnationalism and the immediate crises of racist and ethnocentric state-sanctioned displacement and homelessness loom beside them.

FRANK BENSON (b. 1976 Norfolk, VA, USA) lives and works in Brooklyn. Benson’s three-dimensional and photographic works both reflect a sustained fascination with concepts of arrested movement and the use of digital tools in the creation of sculpture, and the artist frequently works at the fore of advancing digital media technologies. Increasingly, he has employed high-tech software in the production of works – for example translating photographs of human models into meticulously-crafted ‘wireframe’ virtual models and 3-D prints, that serve as the basis for hyper-real and minutely-finished statues, as seen in his celebrated sequence of Human Statue figures (begun in 2005). His work has recently been included in the 2015 Triennial: Surround Audience, New Museum, New York; Art in the Age of the Internet, 1989 to Today, Institute of Contemporary Art, Boston; and Like Life: Sculpture Color and The Body (1300 – Now), Metropolitan Museum of Art, New York.

OLIVIAN CHA is a critic and curator based in Los Angeles.