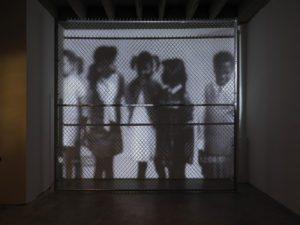 Diamond Stingily’s wide-ranging practice—which spans sculpture, video and print-making as well as poetry, short story-writing, and her eponymous weekly radio show—is marked by a roving lyricism. Carefully attentive to prosaic objects mined from her childhood, her subtle work uses vernacular forms and seductive yet simple objects to gesture towards forces that we all, even as children, must slowly (or not so slowly) come to know and navigate, albeit each in different ways.

Her 2016 exhibition Elephant Memory at Ramiken Crucible presented a series of worn doors that float feet away from the wall, each propped up by a long black metal pole tethered to its back like a firm umbilical cord. A host of security locks line their surfaces: multiple deadbolts, chain links, and occasionally drop open security door brackets cradling a 2’ x 4’ plank of wood. A baseball bat—sometimes wood, other times metal— is leaned upon each, perched just below the locks. With the door handles removed, each wood plank bears a peephole, a dime-sized opening where a handle once was, which serves as a small passageway between front and back, inside and out. All doors in this series are fittingly titled Entryways. 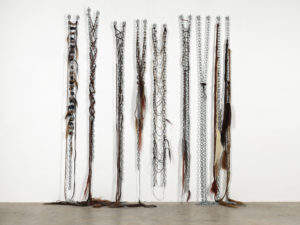 The centerpiece of the exhibition, flanked on right and left by rows of doors with baseball bats leaning on them, is a projection of a black-and-white video titled How Did He Die (2016), named after the call-and-response chant sung by the young girls in the clip. The video is an excerpted portion of folklorist Bess Lomax Hawes’ legendary 1967 documentary Pizza Pizza Daddy-O. Shot in the playground of a Los Angeles schoolyard, the film captured a repertoire of games and songs performed by a dozen African-American fourth-grade girls between the ages of 9 and 10. The morbid song is haunting but spirited, punctuated by the girls’ improvised reenactments of death: “My mother died / How did she die? / She died like this / She died like this.” Within the rhyme, all of the male figures—father, uncle, brother—are described as dead. Only the sister is still alive, a woman who “never went to college / She never went to school / And when she came back [from Tennessee] / She was an educated fool.” Stingily projects the video atop a chain-link fence, and the wire’s shadow casts a pattern of latticework across the moving image, a disruption that reshapes the projection into a series of interlocking parts.

Lattices, loops, and chains recur throughout the installation. Looped telephone cords hang from the wall, twisted into interlocking ringlets. In this work, titled Double-Dutch Rope (2016), Stingily has contorted the wire so it approximates dangling chains. It alludes in title to another schoolyard game, one in which a child must leap to avoid two long jump ropes simultaneously coming toward them from opposing directions. Stingily’s use of telephone wire nods to issues of transmission and frequency, to auditory utterances and quite literally to a phone call, another kind of call and response. In the last piece in the Ramiken Crucible show, which is also the exhibition’s namesake, Elephant Memory (2016), steel chains dangle from the wall. Braided lines of grey, black, blonde, and brown Kanekalon hair dart in and out of the steel rings, hanging and erupting into bushy and feathery tufts, suggestive of many entangled beings. Elephants are legendary not only for their memory, but for moving together in close-knit packs led by matriarchs, allowing the old and young to be protected within the circle. Stingily’s own work often places the transfer of knowledge within a matrilineal lineage, an inheritance passed from grandmother to mother, mother to daughter. “My grandma keeps a bat by her front door and a bat by her bed.” Stingily said, “As a kid I didn’t really pay attention, then I lived with her for a year on the West side of Chicago and I understood the paranoia of her safety.” 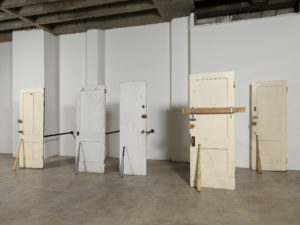 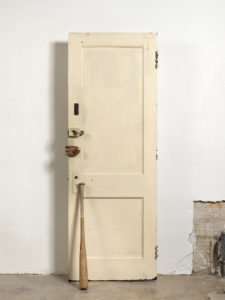 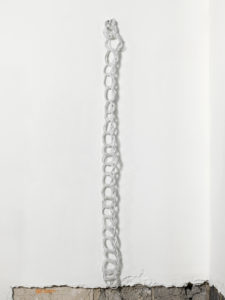 Stingily learned to braid hair working in her mother’s hair salon. Her first solo show in New York, Kaas at Queer Thoughts, was laden with long braids stretching from wall to floor, winding into long spiraling trails, and buoyed by colorful hair ties with balls at the top, suggestive of floating balloons. The show is titled after Kaa, the serpent in Rudyard Kipling’s The Jungle Book, who was a wise advisor to the boy Mowgli and cared for him as he navigated adolescence. The Disney interpretation of the stories trans- formed the snake into a villain, but in the exhibition’s press release Stingily included a line from the original Kipling story, a moment when Kaa finally speaks and reveals his rich and vast memory of the place they inhabit: “I have seen all the dead seasons,” Kaa said at last, “and the great trees and the old elephants, and the rocks that were bare and sharp-pointed ere the moss grew…” The snake periodically sheds its skin, casting it off much like humans lose hair. Stingily has admitted she was also drawn to the symbol of the snake for its allusions to Medusa, the woman in Greek mythology who had living snakes for hair, often depicted as a monster from an archaic world.

We are constantly feeling out the contours of the world(s) we inhabit—testing them for supports, for boundaries, for secrets, trying to uncover where strange thresholds lie, for dangers, comforts, and new possibilities. It’s a way to make sense of it all. Stingily’s first diary, penned between the ages of 8 and 9, is telling in this regard. It was published in 2014 under the title Love, Diamond by Dominica Publishing, a press run by artist and friend Martine Syms. In one entry, Stingily writes in round cursive letters, “Sometimes I think dad work [sic] too hard but he works hard it’s because we need money so we can pay the bill [sic] and the taxes. Love, Diamond.” In another passage, she bemoans her brother for earning wages for doing the dishes one night, a chore she performs daily without pay. If Stingily’s 8-year-old self sounds like a proto-Silvia Federici1-fan, she has certainly carried a community-building ethos forward into her practice, most pronouncedly through “The Diamond Stingily Show,” a weekly online radio program that features the voices of a number of artists actively in dialogue with one another. Despite all the funny games out there, we can always forge new models. Art is, after all, just another way of new world-building. Stingily’s captivating and generous practice attests to this.