After the personal exhibitions of Thomas Braida and Matteo Fato, with Gianni Politi a trilogy is completed designed to investigate and present just as many ways of understanding painting today.
A painter is a world made up of images, recurrences and little manias that accompany him during his life and that very often are keys to understanding intentions and motivations. Gianni Politi has created a triple intervention for the spaces of the Centro Arti Visive Pescheria, whose function is to reveal some internal relationships to his work. A process of “re-use of materials” in which, alongside a calculated planning, a series of random events come into play.
Three types of works that present Politi’s research as a mise en scene of his journey.
The first is the portrait of the father, a series that the artist develops obsessively since 2012, a pictorial mantra, a perennial remake of an ancient painting the Study for a man with a beard (1770) by Gaetano Gandolfi, discovered among the pages of a book on art history; the portrait of a bald man with a pacified gaze that hides a hand in his beard, in which he continually sees and searches for the face of the parent while reproducing the work, varying it from time to time. Each portrait is born from a fade between an inner vision and the eighteenth-century painting; an inexhaustible pursuit towards an elusive image that also underlies reflection on the impossibility of arriving at a stable form, an ultimate, definitive framework.
Set along the wall of the Loggiato, twelve canvases, through forms that always recall the Study of Gandolfi, testify not only the attempt to paint a portrait as an eternal return to a pragmatic way, but also a reflection on how this pictorial genre can still have value and meaning today: “An exercise I have been carrying out for seven years that has served (and still for me has the same function) as a compass and center of gravity of my work, even when it becomes an abstract image.” 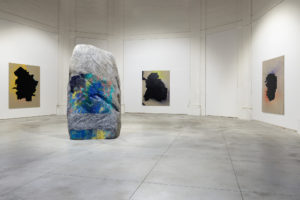 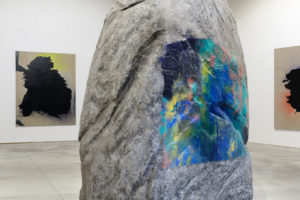 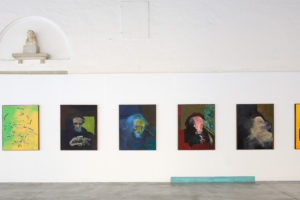 A two-meter bronze bas-relief accompanies the sequence, This is my mind (2018-2019), in which a multitude of scorpions appear. The title, a clear metaphor of the thoughts that fill the mind of the artist, is borrowed from the words that Macbeth addresses to Banquo just before the fulfillment of his tragic destiny: “my mind is full of scorpions”.

The third series of works, installed in the church of Suffragio, deals with the crucial theme of Politi’s research: abstract painting. On the walls five monumental canvases, produced specifically for the exhibition, are made with collage of canvases, coming from fragments of other works, and acrylic sprays; experiments on what can be controlled in painting and what must necessarily be left to chance. At the center of the space stands a monolithic boulder, The Name that Port is of an Uncle, Like the Smuggler’s Backpack (Dolmen for a Perennial Existence) (2019), which seems to come from a primitive and ancestral world and presents on one side , a painting made with acrylic sprays, a sort of statement on an iconic painting.

Over the years, Politi’s research has increasingly focused on the secular discussion between figuration and abstraction. Using scraps generated by “private” pictorial experiences, small great attempts to understand the way in which the materials of painting are used, he developed a practice that attempts to construct spontaneous abstract works, meta manifestations of paintings that are generated by intuition and thought more that from the ability to manage one’s own abilities. Abstract works that ideally continue to gravitate around that single attempt at figuration represented by Gandolfi’s Studio.
The exhibition path created by Politi guides the viewer to enter into a relationship with his restless intimacy, an invitation to spy inside his soul that produces images, but which also aims to destroy them, because his research aims to solve only one big question : does it still make sense to paint today?