in conversation with Taylor Le Melle 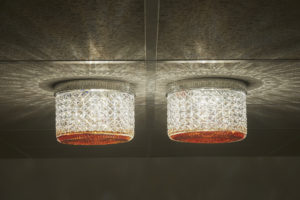 To offer an initial entry point for your interpretation of Ima-Abasi Okon’s work, I would suggest that you might do best to imagine you are getting to know a wider pedagogy within which the objects form only one aspect. Alas, until very recently, Okon did in fact teach full-time. For eight years, she tutored a Foundation Course in Art and Design(1) and until 2019 was a Leader on an undergraduate course in Illustration and Visual Media.

Okon has described her work in those years with her students as an attempt to facilitate their own ability to find and articulate a visual language that is most resonant within them. That process, antithetical to the UK educational system of rote memorization and scored assessments, must also run concurrently to this pre-existing expectation that a student learn a visual language that is accepted as ‘correct’ or taught as an aspect of a historical ‘canon.’ Now as a full-time studio practitioner at Rijksakademie in Amsterdam, Okon has created a space to attune to the resonances in and for herself.

Below is both a snippet and a composite of several conversations between myself and Okon in which I attempt to build a glossary of terms that are foundational to her pedagogy.

Taylor Le Melle What is an attempt?

Ima-Abasi Okon How do I describe it? It’s an aspiration. It’s basically the space between [identifying] the desire and achieving the desire, and the mechanism that allows you to get closer to it.

IAO [Emphatically] Yea! Anything. These are unknown values, right? An attempt can be deployed towards anything really. Like running for the bus, passing certain tests, working out a particular relationship. Maybe one way for me to answer this is to talk about the conditions of an attempt: it is earnest.

TLM Is an attempt always earnest?

IAO It’s always earnest. Yes, an attempt shows maybe how adroitly, how skillfully, how well one can replicate or perform this thing [a value]. That’s important. But I value earnestness before [skillful performance]. The reason why [one would make what I’m calling an attempt] is not to perform simply that one can do it, but rather because there is a desire. That desire that one is trying to attempt should be meaningful and have reverberations beyond oneself. 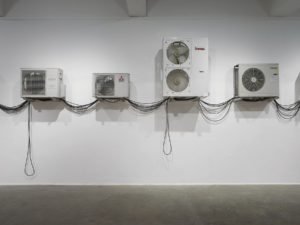 TLM Okay, let’s say you’re looking at any object, do you feel that the attempt that was made to produce that object is legible?

IAO That the object itself carries the manifestation of what that attempt was?

IAO So that the object is documentation of the attempt? Is that what you’re asking me?

IAO [Long pause] I don’t know, maybe. I want to say yes, but then that puts me in the position of being super judgmental, and flippant.

IAO Because that question makes me perform a particular type of taste, as if I’m categorizing earnestness as like a set of visual signifiers. It’s quite messy, I think.

TLM Yes… [long pause] I’m asking because I have a feeling that understanding your definition of ‘the attempt’ is a way of looking at the objects that you make. My assumption is that each time you stage particular groups of objects in a gallery space, that exhibition is an attempt, right?

IAO Yes. And it highlights process.

TLM How am I supposed to see the attempt?

IAO Disrupt the way you see them as objects. Don’t see them as final or an end, or a conclusion, or the answer. An attempt can yield lots of answers, but not necessarily the answer. So to get back to the point of knowing that this exhibition is an attempt, I don’t [generally] make that declaration. I’ve revealed this to you because we’ve had numerous conversations. But if I demarcate something as an attempt then you can approach the objects as if they are ongoing. And that’s one way to look at it.

TLM Where else have your objects gone if the exhibition isn’t the final place?

IAO The objects in themselves become part of a syntax, so actually it’s not that I’m looking at them as individuals. These things come together as a sentence. I can come back and find another way of re-articulating that sentence. If you think about it as language, I might be finding a synonym because [what I previously tried] doesn’t work. Or it didn’t bring down what I wanted to bring down, and so maybe it’s the wrong word.

Okon’s phrasing, that a particular object “didn’t bring down what I wanted” lends me a visual that feels something to the affect of an incarnation. My current understanding is that the word or the idea might become embodied or concretized through the attempt. A number of religions and philosophies have terms, or language, to describe the object-representation of a thing which, in itself, is unseen. We continued to talk through practices which the unseen is made apparent.

IAO If we agree that what I’m trying to do is make [a sentence], a spell or a prophecy, then between us there is an understanding on how materials are used in such practices across the globe.
So in a way art allows me to kind of practice this spell making, or this prophecy that I’m working towards. I kind of enter an agreement with these materials [in my work], I treat them with care and respect. Their usefulness is not predicated on human value systems. If no human being interacted with these materials, they would still have value in some other realm that we’re not privy to. I believe and take this on board; I’m trying to think about how I protect these materials from the economy at large.

It is at this point that I realized the natural, mineral quality of the materials listed in recent object works: wood flakes compressed into Oriented Strand Board(2) and palm oil warmed under electric lamplight.(3)

TLM When you say this economy at large are you literally meaning the economy of buying and selling?

IAO Yes. I’m trying to protect the materials from a transaction that is rooted in a value system devised by human beings. The materials are beyond that… the value system is corrupt. It’s just based on particular subjectivities and has been rolled out as universal policy.

TLM I’m not sure that a monetary transaction that includes artwork is corrupt, but rather is susceptible to being corrupted, and maybe has been corrupted but not necessarily so.

IAO Because of its relationship to materiality, art enables me to practice something else that I’m interested in. Yet, I’m trying to find a way to protect the materials from the transaction that will come from practicing in that space [the gallery].

TLM Does the spell actually turn the design object lamp into an art object lamp?

IAO No, no, no. The spell is what the art object performs.

TLM What turns an object into art? The materials?

TLM Please talk me through the soul. I’m trying to make a glossary, honestly.

IAO I’m not interested in filling a space with stuff. I want there to be some kind of movement. I want the work to impress upon people. I’m trying to engage.

TLM This is why I think you’re a healer. Because you are essentially making spells in terms of being able to, let’s say, speak or communicate, but also in order to move.

IAO Yes, to galvanize, to reset. These types of movements, impressions that I want to make, I’m not trying to follow the order of the day in terms of what we understand language to be, how we learn it, how we revise, or how we trade in it. If you understand what it means to make spells, or understand what it means to prophesize, the way that language is structured, the way it’s used and deployed is completely different. The way I’m thinking about things is intentionally irrational.

TLM But you have equations.

IAO Yes. They get me so far, and then I abandon them. They get me to a point where my intuition is able to kind of take over. And that frees me up to kind of just say to myself, “okay, you know what? I want to do it my way.” It gives me more confidence and courage to do that.

In the UK, a Foundation follows the completion of A-Level or equivalent, and until recently has usually preceded a bachelor’s degree in either an art or design based subject. I note this to highlight Okon’s pedagogical engagement with students at an embryonic phase of their artistic professions, some who have eventually practiced not only as artists but also musicians and designers of all types.

Mahalia’s CounterApparatus: A profound Intimacy of interlocking detail— I want it A lot More M-o-i-s-t, Wetter, What! What! Yes! (Redmahogany&Mahogany&Kolonial&Walnut) (2019).

When the —[After-the-world presocial vivid thereness and ongoingly]— is in the system (2019).

TAYLOR LE MELLE is a curator and writer. In 2019 they wrote monograph texts on the work of Sophia al-Maria and Helen Cammock, and was curator-in-residence at Wysing Arts Centre. Taylor is co-director of artists’ workers cooperative not/nowhere.