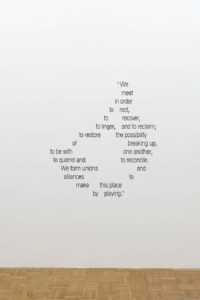 Barbara Kapusta, We meet / to make this place by playing, 2018

A few weeks ago, I learned about the RBDSMF method in communication. The abbreviation marks the space between the two people who are then sitting across from each other and are talking with radical honesty and without any judgment about each topic: R-Relationship, B-Boundaries, D-Desires, S-Sexually Transmitted Diseases, M-Meaning, F-Fears. I was out with a guy I crossed paths with a few times over the course of months before we actually talked, and this was the second time we met up. We were sitting outside, in a café facing a park, so we had something other to watch than just ourselves. We danced the dance of getting to know each other, talking about shitty movies and the relationship to our parents, about beliefs and the number of candles in our apartments. Meeting a potential love interest is one big communicative absurdity, navigating the banalities and endless depths of a being in casual chit-chat – both of yourself and of the other person.

Barbara Kapusta states that community is formed through performative processes. I keep thinking that the self is formed just the same way. Her work imagines possible alternate forms of community We Make the Place by Playing (2018) consists of various elements, some of the sculptures that look like fragmented figures, pieces of selves. They come together in order to redefine the conditions of living together. «What more is playing, she thought, than changing habits? Breaking habits of moving and being», it says on one side of the room. If we can manage to make places by playing, what possibilities are there for creating the self? 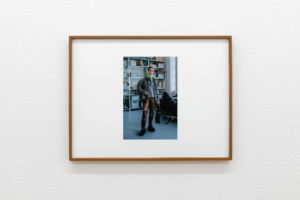 I took a second drink while feeling bad about being the only one drinking, only to catch myself having that thought and immediately feeling bad that it bothered me at all. Ultimately, the RBDSMF method allowed for just that: a playful setting to approach the seriousness of the other, a guided path to intimacy. In a way, I was glad. The clear framework of topics relieved us of the underlying burden of having to present some form of ourselves – because, let’s be honest, what are the first encounters between strangers but that?

First impressions are something Helin Alas plays with – and with the false friend that a constant identity pretends to be. For Opening Outfit, she imagines the look of “an artist” and uses the production money for each exhibition to buy the trendy outfit with all the visual signifiers you’d expect from the art scene. She creates editions of herself and appropriates outside projections on her as a female artist. To what extent do you “make yourself” in the end?

The first few levels of RBDSMF were easy. The thrill of novelty, mind and soul exhibitionism, the chance to really be seen. Who are you when no one is around, and how much of that do you show to others? We dove headfirst into our respective realities, and naturally, there was a lot to unpack. Like anything radical, candor is a powerful tool that should be used with caution, especially in initial encounters.

Sans Rayure (2021) by Shirin Yousefi consists of three projected human figures that show a V sign, commonly considered a victory gesture, but having very different meanings depending on the cultural context and circumstances in which it is shown. I was surprised when I learned about the origin of the gesture. The work is a fragment of ongoing research tracing it back to indigenous communication using the sign as a non-verbal warning signal. One warns of wolves, one shows the presence of dogs, and one is the human’s sign for victory. How much is lost in-between the folds of transmission? It seems only right that the three deformed figures send us some distorted messages. If you don’t know the origin of things, is misunderstanding bound to happen?

Communication has so many layers, it’s exhausting sometimes. You cannot not communicate. Even silence says something. By the end of the hours, we had spent together talking our way through all the layers of RBDSMF, I had a feeling like when you look yourself in the eye through the mirror for too long. It’s unsettling to see yourself from the outside, even if it’s only a split second. The most familiar, one’s own self, suddenly seems alien. The next two days after this meeting, I tried to shake off this feeling, but without success. We never saw each other again after that. Despite relentless honesty and non- judgmental listening, the truths of the real self have remained concealed – to be unfolded apart from RBDSMF. 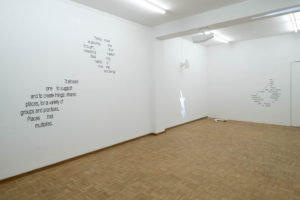