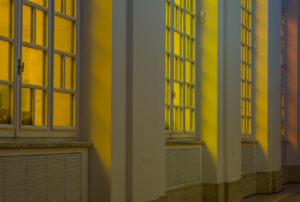 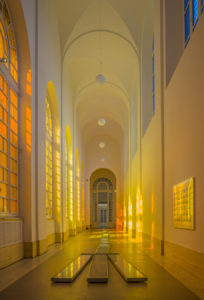 
The Mediterranean has long been the research field of INVERNOMUTO and the intervention at the Gallery entitled “Before the Sands” represents a new arrival point, fully contextualized within the museum.
The work returns a completely new narration of the Mediterranean, at the moment in which it is assigned a perspective according to which from a large sea surface it becomes a “protean” subject, a river with multiple mouths, where the coordinates of the North are no longer detectable of the South but the sea is in mutual communication with the territory: the installation of INVERNOMUTO involves the work Fiume con foce tripla (1967) by Pino Pascali, an important presence in the gallery’s collection. The element of water, which cannot but recall approximately 32 square meters of sea by Pascali, is combined with the chromatic effects of the work of light design, with images, sounds and details that recompose an apparently familiar but actually disturbed geographical environment from dynamics waiting to be completely revealed in their problematic nature.

The space in which the Gallery houses the exhibition, the Connection Gallery (Room 28) which connects two sectors of the museum, becomes a fundamental element of the installation, even more at a symbolic as well as spatial level. The modular aspect of Pascali’s work is part of a composition that combines sculpture, light, sound and collage in a game of cross-references and dissonances that highlights the awareness with which INVERNOMUTO moves in the transition from one medium to another. The set of numerous multidisciplinary elements that make up the installation suggest a performative vision, a distinctive trait of the artistic duo’s work.