Ivana Bašić: Passing through the Intangible 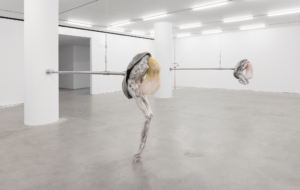 To twist the inside outward, to give contour and inertia to the most far reaching corners of the mind, is not only to make art, but to initiate deep transposition. Through such a holistic approach, New York-based artist Ivana Bašić utilizes her artistic materials as substances that synchronize their elemental properties to the sculptural forms that they take. Born in Serbia and having lived and worked in New York since 2010, Bašić has continued to develop the introspective basis for her work, beginning with one-off sculptural forms that evoked more universal characteristics, and over time elaborating their conjured impulses into inter-connected installations made up of complex characters. Such works are often premised on an abstracted sense of primordial matter succumbing to various conditions that are pressed upon it. Exaggerating visions of something as seemingly banal as grains of dust, Bašić captiously imbues her work with a creatural vernacular built upon her specific selection of materials and their reflexive compositions.

Both an anatomical and a meta-physiological focus on the corporeal runs through much of Bašić’s work, which spans a multitude of media, including video, and sculptures in stone, stainless steel, silicone, blown glass, and, predominantly, wax. Sculptures made up of these materials are also at times interjected with machinist elements, offering a palpable connection between any given entity and the broader systems within which it must operate. This kind of sculptural symbiosis that Bašić strikes between kinetic and figurative compulsions was in full effect in her 2017 solo exhibition, Through the hum of black velvet sleep, at Marlborough Contemporary (New York). The show focused on ways in which pressure, over time, causes both the reduction and the generation of all things into dust. The installation featured twin protagonist forms, the vulnerability of whose wax bodies, with their heads encased in blown glass, is protected by large steel shells affixed upon their backs. Each figure’s assured expiration is punctuated by two accompanying works, which function much like hourglasses, titled A thousand years ago 10 seconds of breath were 40 grams of dust #1 and #2 (2017). These pieces allude to the dust collecting inside the glass baubles covering each figure’s head. They are made up of large hunks of pink marble that are locked into tall, stainless steel devices, outfitted with electromagnetic rods that, like a metronome, pang repeatedly upon the stone, slowly breaking down its surface, while the particles of its remnants collect in a grainy pile on the floor. The cycle Bašić puts into motion with the relationships that she forms between these works elucidates the most primal stages of becoming, being and ceasing to be; from malleable wax bodies, to gasps caught in glass, and stone that turns to dust, only to be compounded upon itself and turned back into solid matter.

For her new body of work, currently in production, Bašić explores the process of metamorphosis, wherein her sculptures undergo a series of transformations: from material to immaterial; from organic to inorganic; from human to insectile and from ground-bound matter into pure idealism. 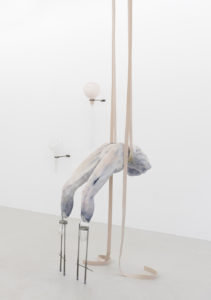 In their dissipation, Bašić’s sculptures evoke the idea of self-dissolution as a potential path to immortality. Through this progression, she builds upon this dynamic by using the universally traumatic awareness of one’s own finite mortality to ignite a transformational and protective process of mental flight or escapism.

To see that Bašić turns the inside out is to recognize the kind of inner turbulence, limitations and expansiveness that fuels one’s own cognizance. The self, itself, is thus central to any examination of her work, yet here ‘the self’ is not individualized or determinately human, but is instead an abstracted, axiomatic sense of ‘the knowable.’ We know what we are based on our limits, both physical and mental. It is within the porousness of that unspoken agreement—which delineates the border between us and them, us and another, us and the other—that Bašić’s work seeks to traverse. With every body of work that she completes, she ties each piece more lucidly to another, some connoting the oscillation that might signify a non-cognitive shift, others personifying such an exertion into somatic configurations. In this way, Bašić susses out those underlying feelings and tendencies that we barely realize we are experiencing, as well as the looming inevitabilities inherent to life itself. 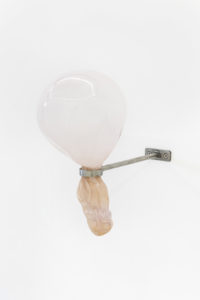 IVANA BAŠIĆ
PASSING THROUGH THE INTANGIBLE

COURTNEY MALICK is a curator, writer and editor based in Los Angeles/San Francisco. Focusing on video, new media, sculpture, performance and installation, Malick parses sociological shifts. Following completion of her MA from the Center for Curatorial Studies at Bard College, she has organized curatorial projects in New York, Los Angeles, San Francisco and Miami. Malick also contributes to Art in America, Art Papers, and Flash Art, among other publications, and is a founding member of DIS Magazine.