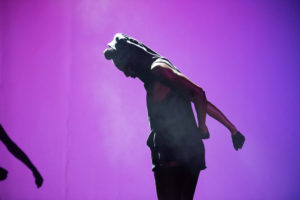 Jamila Johnson-Small emanates a magnetic force that captures and surprises as soon as one is in her presence. The written dramaturgy is suddenly raised by the emotion that the artist conveys in that moment, and her performances turn into a space of communion with her mesmerized audience.

Whether it is her body or her voice, her very presence is intention, a transparent commitment in which the information given is received by the audience as a transferal of emotions, imperceptible but sure. With her performance Fury1, a work made with Rowdy SS, for example, on entering Johnson-Small’s world we are galvanized by her slightest movements, which act as invisible words whispered in the ear of the spectator. A sort of intimate trance which she herself seems to be subtracted from, opening up the boundaries of the place, transcending the moment. The spectator gets involved through his/her own intimacy. It is a breaking of borders that questions everyone about their own place, about their own possible point of view.

If—when trying to understand what the London-based artist conveys, giving her an undefinable aura—one first looks at her origins or her gender, i.e. her being black and queer, what actually surprises is her way of confusing the tracks and multiplying the construction of her spaces: choreography upon dance, active installation upon performance, poetic fragments upon narration. Born a Caribbean-descent Londoner, Jamila Johnson-Small attended the London Contemporary Dance School for five years, but her research immediately turned mainly towards ways to hijack the pre-conceived forms of contemporary dance, which she saw as over-codified. She opted, instead, to focus on the perception of space and body through the juxtaposition of lights, materials—from costumes to decorative elements—and sounds, using all the space, even that in which the audience is. It is an approach which is closer to that of nightlife, of nightclubs, seen as spaces of freedom for artists. In 2009 she started presenting works as immigrants and animals, a collective which specifically became a duo project in 2012 with Mira Kautto. The project was implemented on the web through meetings, feeding on many actions and collaborations featured through a blog.1 Another collective, Project O, was cofounded with Alexandrina Hemsley and conceived as an expression platform to subvert the classic models of representing dance, questioning them in regard to identity, color and sexuality.

If the education of the artist in a dance school seems to be the starting point of her reflection and puts emphasis on the body, the result is that what this body represents during performance is directly confronted by social constraints. This is perhaps the reason why Jamila Johnson-Small plays on her identity through various pseudonyms, giving the impression of being multiples of herself. Her alter ego, Last Yearz Interesting Negro, and the titles of some of her performances such as Fury, Voodoo, i ride in colour and soft focus, no longer anywhere, are chosen to convey ideas even before her reaching the scene. The social dominant of her body, black and queer, is in her work something that goes far beyond the representation of her shell, but rather a time and a space in which her body goes through various representations. On the other hand, whether it is Fury or i ride in colour and soft focus, no longer anywhere, the artist is hardly ever immediately visible, leaving room for sounds, rustling objects, projections in which her body is magnified and shattered through shadows and projections in different spots of the room. And when she actually appears, Johnson-Small blurs, obscures our perceptions, takes us into an elusive context of multiplicity, with her “dancing” body preventing any representation of an organism as a stable, balanced and identifiable entity. She states in an interview: “Trying to hold on to multiple confusing parts of my identity and making situations more complex rather than making them more simple.”2 The body is expanded also for what it represents, and embodies the archive of what informed it. It is already with Voodoo, a performance created together with Project O, that Johnson-Small expresses this very clearly. An 8-hour performance that proposes a hymn to the present of these bodies which bear the impact of their legacies, which preserve the unspoken and canceled history. The body is an archive, it states what has been ignored, it confirms what has been deleted. It becomes an oracle and a receptacle of invisible echoes from the individual, collective and historical memory. This endless quest becomes even more deeply intimate later, with i ride in colour and soft focus, no longer anywhere, in which the artist tells of her father’s recent death and wonders what shape his body had on the ground at the moment of his death, speaking of “body as oracle, a trance, a rhythmic interface, an atmosphere, a landscape with the texture of my current mental state.”3 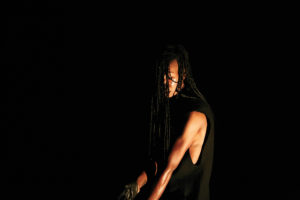 The artist herself claims not to perform representation but incarnation, and from the moment in which it is necessary to act in order to exist—to be an artist, to be a woman artist, to be a black woman artist (will these qualifiers ever be dropped?)—she goes even further into form, by building a radical, political, intimate and poetic body: “In some ways I think allowing myself to be my complex self is an act of resistance.”4 An urge to act in order to shift the boundaries. Even through her collaborations and involvement in collectives, Johnson-Small triggers a game of reverberations that can go on forever, an opening on further bodies and spaces for creation. A movement that creates a public space in which the political element is implemented and uses all possible means, such as writing—A Contemporary Struggle, university lectures—Benz Punany, The New Empowering School, but also radio broadcasts—Bitches Minute, or performances, such as with Native Instincts: Psychic Labours.

This proliferation and implementing of various formats and spaces of visibility expands the performative spectrum leaving no room for dispersion; yet it causes a sort of extra-concentration—the poetic elaboration of the political debate, its oralization and its incarnation. In the Sound as Weapon, Sounds 4 Survival group performance created with Phoebe Collings-James, a “psycho-emotional landscape” was outlined straddling between music, dance and sculpture, centered on a conceptual deconstruction of percussion, working both as a tool and as a radical proposal involving the different ways of hitting an object. In short, a battlefield set up for oneself to be. This is probably also the reason that drives Johnson-Small to often work with collectives, because in this way she can interfere in new contexts and because together we are all stronger. All these expressions, which are not limited to dance but increasingly involve new tools to overcome the boundaries of form and language, allow us to catch a glimpse of Johnson-Small’s work as an “active” landscape, a seismic territory in which her body can be viewed as “the geography closest in,”5 a geographical object in itself, influenced by complex social relations, a place of development, of differentiation and resistance—not only a support for symbols and representations, but an actor of the revolution in progress of the territory of our mind.

Jamila Johnson-Small about i ride in colour and soft focus, no longer anywhere for the Kaaitheater, 2019.

Robyn Longhurst, The Geography Closest In ‐ the Body… the Politics of Pregnability, in Geographical Research, vol. 32, Ed. Institute of Australian Geographers, 1994.

VITTORIA MATARRESE graduated in architecture in Paris. She is Director of Performing Arts and Curator at the Palais de Tokyo. She has worked at the intersection of several artistic disciplines and throughout her career she has held various positions, including that of Artistic Director of Villa Medici in Rome. She also currently teaches Performance in contemporary art at Paris Panthéon-Sorbonne University.