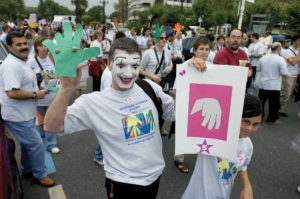 Deller was the first artist I invited to be in Manifesta 5, which was held in the Spanish Basque city of San Sebastian, in 2004, the year that Deller went on to win the Turner Prize. Folklore, history, and local myths play a fundamental role in the Basque Country because they bolster the sense of independence on which Basque national identity is built.

The first work by Jeremy Deller that I ever saw was a t-shirt with the stylized drawing of a soundwave: a techno sort of aesthetic, classic DJ stuff. I bought it in Paris, at the Agnès B gallery, and wore it till it was in rags. Back then, in about 1997, I was probably aware of two or three things that Deller had done: Acid Brass, for instance, a concert where a brass band played acid house covers instead of the usual marches or national anthems. I’d only heard about it, though, and maybe seen photos. That’s how you would get to know Deller’s work, through word of mouth, like those stories that hardcore fans tend to trot out to prove how well they know their idols: a kind of identity marker, or even a talisman, to show membership in a group. And then there were the posters with disjointed phrases borrowed from nightclub signs, and that legendary first exhibition, held at his parents’ house, where he was still living. The Use of Literacy is the first work by Deller that I ever installed: a small collection of drawings and paintings that Deller had gathered from fans of the Manic Street Preachers, encouraging young punks and goths to send in portraits of their heroes, the kind they might put in their diaries. It was a very personal piece, and hard to define: all Deller did was to showcase the enthusiasm of these fans and their amateurish, ingenuous, touching pictures. The drawings were mediocre, but Deller treated them with love and respect, like a historian presenting the artifacts of some forgotten yet fascinating civilization. From the outset, Deller’s work has shown a passion for the humblest expressions of popular culture: the same feeling that later manifested itself in his Folk Archive project, a collection of vernacular art and local traditions collected from local fairs and small-town museums.

When Deller’s art deals with music, it seems to describe a world I knew well in my teens: a more or less alternative scene, where the itch for independence often went hand in hand with a sense of melancholy and loneliness, of not fitting in, which was also a political statement of nonconformity and rebellion. 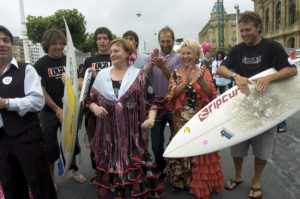 When it explicitly deals with politics, on the other hand, it has always been marked by a touchingly sincere sense of humanity and empathy for the underdog. Watching some of Deller’s works is like hearing your grandmother telling you stories about the Resistance, or learning the songs once sung on factory floors or in rice paddies: it is an emotional world that may be on the brink of vanishing, but which in Deller’s works seems to enjoy one last moment of spontaneous, communal participation. This kind of impulse gave rise to his most famous piece, The Battle of Orgreave, which reconstructed the violent clashes between police and picketers that took place during a miners’ strike in the 1980s.

Deller was the first artist I invited to be in Manifesta 5, which was held in the Spanish Basque city of San Sebastian, in 2004, the year that Deller went on to win the Turner Prize. Folklore, history, and local myths play a fundamental role in the Basque Country, because they bolster the sense of independence on which Basque national identity is built.

For Manifesta, I asked Deller to create a new folk museum centered on the customs and traditions of the Basque Country. Deller enthusiastically accepted the invitation to be in Manifesta, but decided to create a new work rather than a continuation of his Folk Archive. So he began making regular trips to San Sebastian, sometimes several times a month, spending entire days visiting small-town bullrings, carnival processions, country banquets, protests and demonstrations. I was waiting impatiently for his project, but didn’t dare pressure him to hurry up because he went about his research with the precision of an anthropologist—even though I sometimes thought he was just looking for an excuse to get away from the gray skies of London. After at least five months of traveling back and forth, Deller finally decided to reveal his plan: he wanted to create a parade that would march through San Sebastian, gathering thousands of people from different groups and associations. The list of participants that appears in the catalogue is worth transcribing: surfers, barkeepers, cyclists, retirees, magicians, nudists, people with disabilities, Parkinson’s disease patients and their families, fishermen’s wives, AA members, Samaritans, medieval history buffs, homeless people, bonsai enthusiasts, buskers, members of the national association for the blind, single mothers, separated parents, veterans of the International Brigades, pastry chefs, transvestites, psychologists without borders, veterinarians without borders, animal rescue workers, stamp collectors, astrologists, refugees, underwater filmmakers, guitarists, trainspotters, campers, blood donors, clown doctors, tattoo artists, and many more. Depending on who he was trying to convince to participate, Deller described the project as a cross-section of the city of San Sebastian and the many invisible communities that compose it, or as being like a trip to Springfield, the surreal town inhabited by the Simpsons. At other times he described it as social sculpture or as a moment of celebration, a holiday with no pretexts or heroes, a secular procession, an interruption of urban routine that would bring traffic to a halt, as thousands of participants poured into the streets. Although he never cited Mikhail Bakhtin, the idea of carnival as a subversion of established hierarchies was at the heart of this experiment. And without dragging in Joseph Beuys, Michel de Certeau, or Situationist psychogeography, Deller’s parade seemed to revisit various traditions of collectivism and participation, dwelling in particular on how the occupation of public space defines societies and individuals. 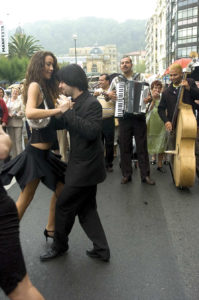 Indeed, the most radical aspect of this work—which like all of Deller’s social choreographies, blends political and social principles with a touch of lightness and humor, avoiding any whiff of demagoguery—was the way it reinvented the participatory rituals that seemed to govern the use of streets and squares in downtown San Sebastian. On one of his many visits, Deller witnessed the weekly demonstration in which the relatives of political prisoners from the ETA movement marched through the streets to ask—in complete silence—that their loved ones be transferred to Basque prisons. On other occasions he saw the families of terrorism victims march to demand an end to the separatist violence. And every day, at dusk, he saw the center of town fill up with thousands of people who came out for their habitual evening promenade, with a drink before dinner and some shopping. Invading the streets of San Sebastian with his parade, Deller dreamed up new ways to display civic pride and participation in one’s own society, recognizing and reflecting political and class differences without homogenizing or neutralizing them, but rather celebrating what has always been the driving force behind all his work: joy in people, as he would title his retrospective eight years later.

MASSIMILIANO GIONI (born 1973) is an Italian curator and contemporary art critic based in New York City, and artistic director at the New Museum. He is the Artistic Director of the Nicola Trussardi Foundation in Milan. Gioni was the curator of the 55th Venice Biennale. He has been involved in a wide range of projects: co-curator of the Venice Biennale (2003) (curating the La Zona section); co-curator of Of Mice and Men, the Berlin Biennale (2006); co-curator of Manifesta 5 (2004), curator of 10,000 Lives, the 8th Gwangju Biennale (2010). In 2002, he opened a The Wrong Gallery, in Chelsea, with Ali Subotnick and Maurizio Cattelan. He was US editor of Flash Art magazine from 2000 to 2002.