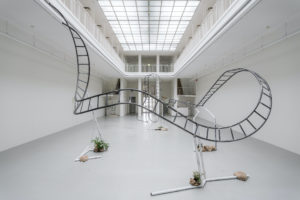 Constructed in Pennsylvania in 1827, Gravity Road was a precursor to the modern roller coaster; a sloping stretch of railroad used to cart coal out of mines. With passenger rides on offer soon afterwards, the rapid descent became an attraction and the technology was appropriated for thrill rides in amusement parks. The emergence of steel roller coasters in the mid-twentieth century allowed for increasingly daring designs, competing to be the largest, fastest and most dangerous.

Jesse Darling’s sculptures, drawings and installations address the fallibility, fungibility and mortality of living beings, systems of government, ideologies and technologies –nothing is too big to fail. For their exhibition in the hall of the former Marienbad baths, built in 1938, Darling (gender neutral,3.person plural) will install a sculpture of a dysfunctional roller coaster. The steel construction, broken down to a child-like scale, becomes an antimonument to a modernity that celebrates progress, acceleration and mastery and produces violence –a relic of a happiness machine whose entertainment value lies in stimulating the physical effects of panic. 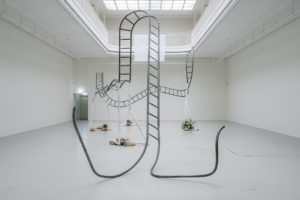 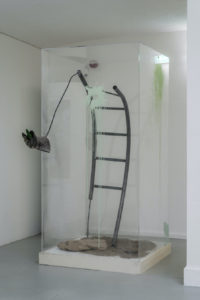