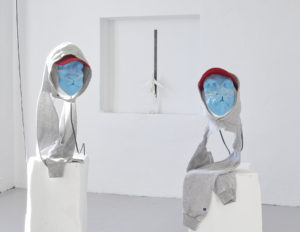 Any mutant super-organism, if still an organism, will at one point feel fragile and vulnerable. At the core of all our added plug-on and -ins, hormone treatments and designer drugs, lies a coil of eternal humanity, common to all living creatures: the need to care and be taken care of.

This is where Jesse Darling’s practice comes in. Their sculptures are staunch and opaque, escaping art’s usual representational regime in favor of the ambiguity of things—objects and bodies alike. Indeed, they are not realist but ferociously real, stripped bare of any speculative or allegorical varnish. Take, for instance, this plastic school chair striving to stand upright on its meter-long, wobbly-looking legs. You might have seen it at the current 58th Venice Art Biennale, together with other, similar ones that make up the work March of the Valedictorians (2016). To us, this chair looks exhausted and miserable. Sure, we might identify ourselves with this banal plastic thing, a fitting stand-in for our own condition as a faceless, exhausted body amidst a grey mass of disposable human capital. As an artwork however, this group of chairs does not represent or perform anything else beyond their own, tragicomical failure to be a “normal chair.” They do, however, ask for their specific condition to be acknowledged: some brutally banal, aesthetically uninteresting plastic chairs, that nonetheless possess a right to be present, and to be noticed.

“Objects are bodily and complicated,” wrote Jesse Darling in an email exchange we had two years ago. At the time, they had just opened their solo-show Armes Blanches at Galerie Sultana in Paris. From an earlier digital and immaterial media practice, they had started to fully embrace a practice as a sculptor. Objects’ stubborn being-in-the-world, they explained in the email, had a lot to do with this shift. This was the practice that seemed the most fitting to the central preoccupation of their practice: making room for the radical Otherness of all bodies, of any bodies. Born in 1981, the British artist started art school as they were turning 30. After graduating from Central Saint Martins and Slade School of Fine Art in London, they made a name for themselves from within the media-structure, and media-hungry art world, of the early 2010s. Through video, social media, poetry, essays, lectures, they already endeavored to carve out a space for intimacy and plurality from within a corporate ecology offering little or no hope for radical alternatives—IKEA and Batman provided themes for some of the early shows. 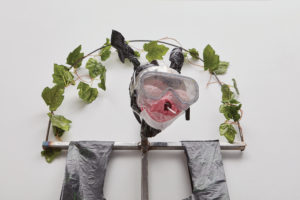 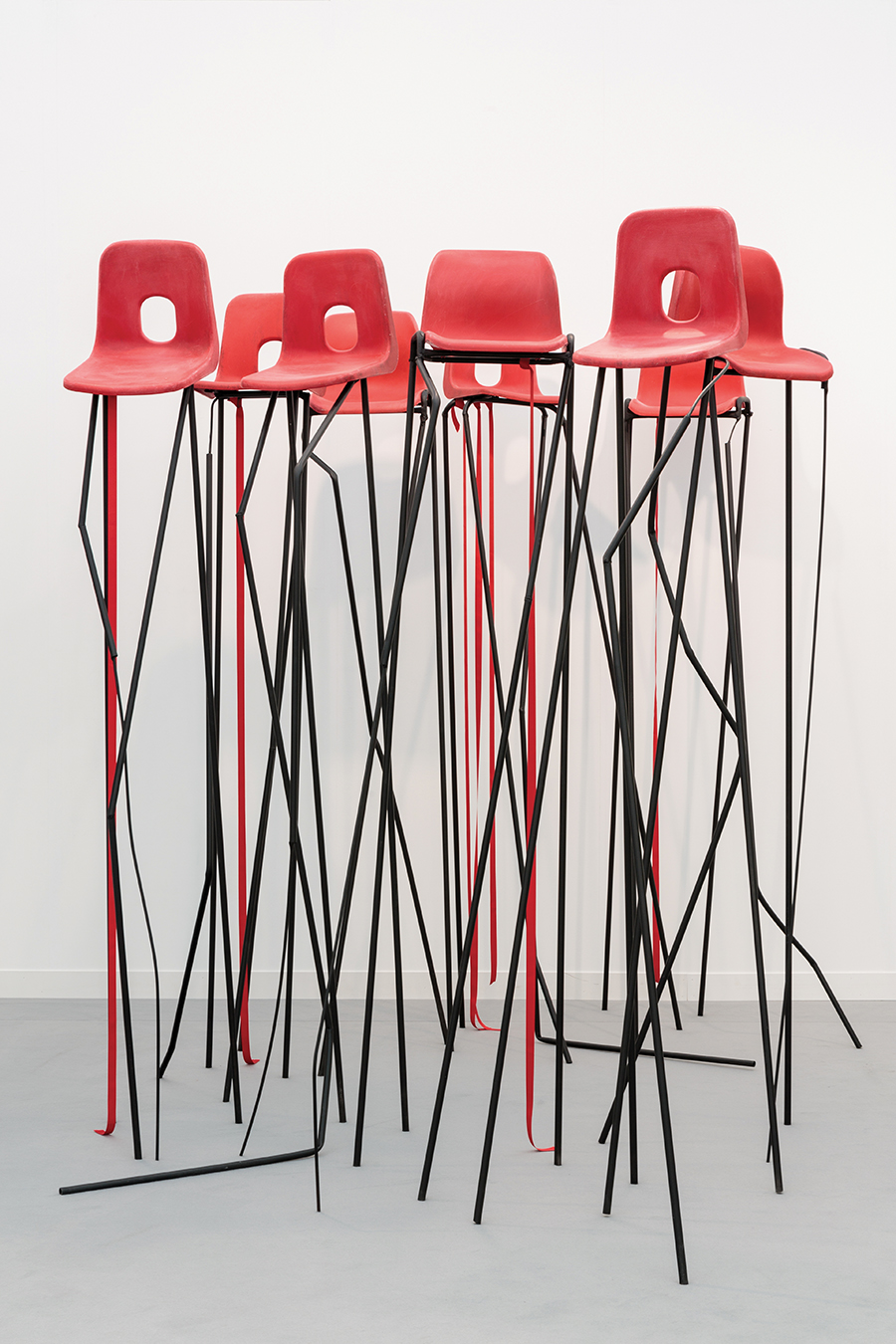 In a 2012 interview on Rhizome.org, they assessed: “I believe very strongly in contingency—or otherwise, [potential-] failure-as-process.”

The aforementioned gallery shows were both held in 2016: The Great Near at Arcadia Missa in London and Atrophilia with Phoebe Collings-James at Company Gallery in New York. At Company Gallery, a lion sat perched on its pedestal. We see only its head, which is protruding from under a red cap, while the body is sketched as a mere pair of dangling, empty sweatshirt arms. This piece is more figurative than their later ones and displays more sculptural savoir-faire. But the tape patching up the lion’s blue head already signs it as one by Jesse Darling. Again, this detail signals that it is as much this individual object (a sculpture) that is hurt than the character it represents (a lion). By turning to a space-based practice, Jesse Darling both anticipated and accompanied a turn that saw artists abandon the ethereal digital enthusiasm of the beginning of the decade. In his 1988 essay The Inhuman, Jean-François Lyotard could still ask whether thought could “go on without a body,” and fantasizing about a future where thought and body would be dissociated according to a hardware/software model. Thirty years later, we seem to rediscover bodies anew. They appear as a nodal point where economic, political, scientific and ideological fluxes materialize.

“I do see the sculptures as mortal and vulnerable, just as we all are […]. This is a politics of care as well as a way to remember that nothing is too big to fail,” wrote Jesse Darling in the same conversation. At Galerie Sultana, the works testified to a lighter sculptural practice, a cocoon exquis combination of various daily-life materials closer to assemblage than sculpture as such. Some of those materials were found: plastic bags, work gloves, various medical supplies, sometimes flowers left to wither. Others had been slightly tweaked and repurposed. Welded steel structures held various objects: a found plastic bag, a work glove, a molded, silicon corset, several recurring pink jesmonite fetuses (or were they aliens? cancerous growths?), as well as stern Commedia dell’Arte masks. Quite clearly, identity was here posited as socially produced, be it through archetypal political roles (the masks) or gender stereotypes (born an indistinct cell-mass, you are made to fit into a bra or a glove, be it through a medicinal straightjacket). There as well, the material presence of the works alone, porous, transient and detumescent, was enough to convey as a bundle of sensations the themes delineated by each more referential element. 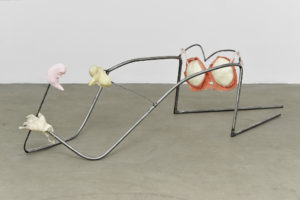 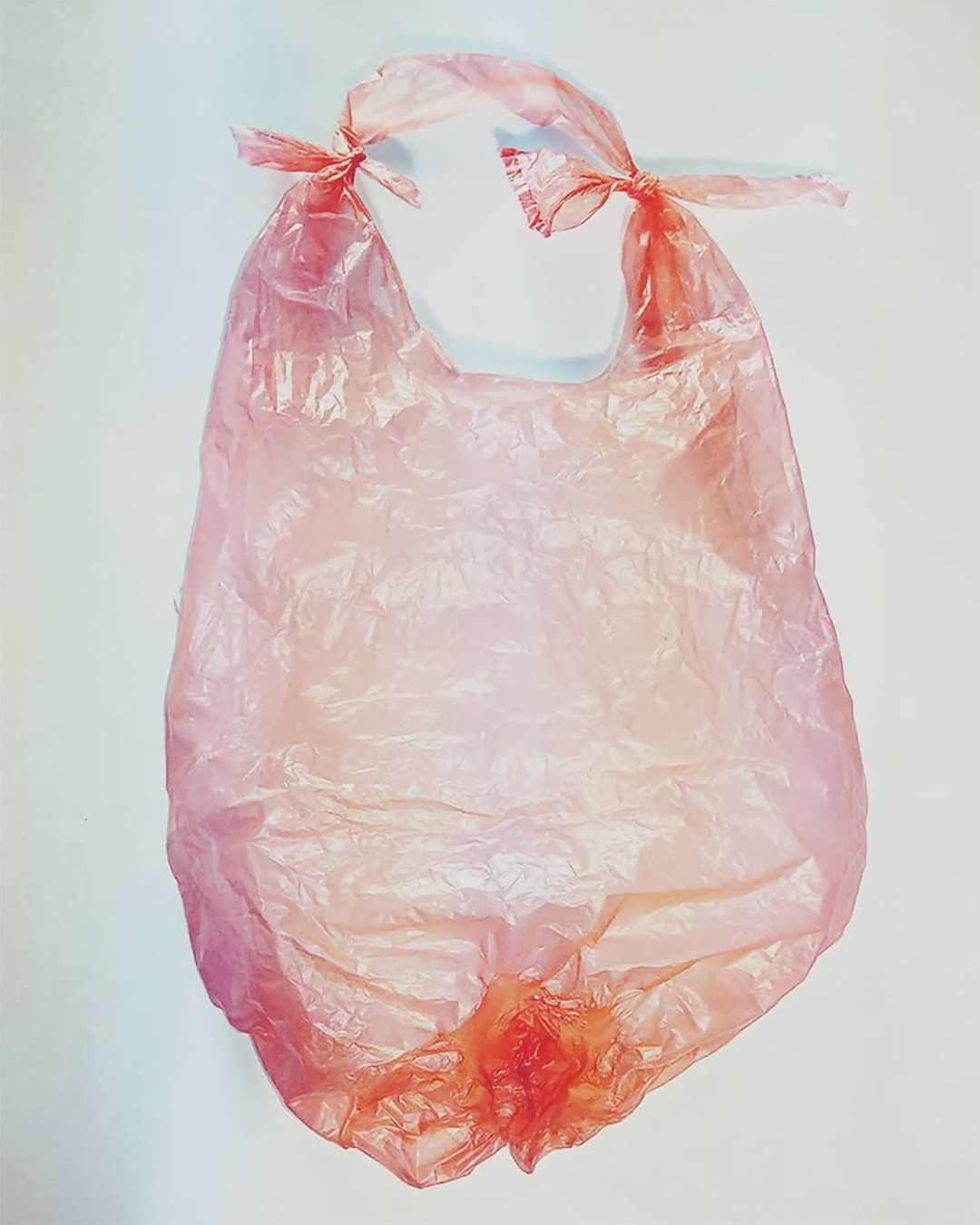 Emphasizing presence over reference opens up an alternative to the two of the main caricatures often found in more representational strategies. On the one hand, there is the posthuman messianism of the 2010s. On the other, its current counterpart, with its procession of zombies and mutants, coated with a glamorous apocalypticism. Both submit to the trend of inventing radically new bodies. Jesse Darling’s object-as-bodies and bodies-as-objects present us with nothing that is essentially new. Caring, being in pain, looking for intimacy, expressing vulnerability, has not yet been technologically overcome. Jesse Darling’s bodies are not mutant. They are fundamentally Other, not fitting in, painfully trying to cope with a daily life where instead of questioning the superstructure, one turns to self-enhancement techniques to stay always on, always flexible, always vertical. While different bodies, visibly so, are slowly reclaiming a space in the public sphere, it might be non-productive bodies that remain most excluded, also from representational strategies. Disabled bodies, injured bodies, fragile bodies, dissenting bodies. Crevé, the artist’s solo show last spring at Triangle France at La Friche la Belle de Mai in Marseille specifically took up this subject. There, nothing was standing upright. Stranded steel paper planes covered the floor, while flowers trapped in glass-cases were left to wither under public scrutiny.

Two years ago, Jesse Darling became ill from a neurological disease that left them paralyzed on one side and in great pain for over a year. The French word crevé, which translates as “punctured” or “exhausted,” came from this experience. So did their first major institutional solo show, The Ballad of Saint Jerome at Tate Britain in London last autumn, built around the biblical myth of Saint Jerome who tamed a lion when he understood it was wounded and needed help, and that it was not a dangerous beast to be tamed. There as well, the works invent new, futuristic bodies. They refused the imperative to adapt or disappear. Twisted museum cabinets perched on metal legs, crutches bent under their own weight, anthropomorphic lions equipped with a medical kit: absurd and poignant at the same time, they shun interpretation. “Are they going to stay there, set down, left in utter neglect, abandoned?,” asked Jacques Derrida in his 1978 essay Restitutions of Truth to Size, addressing the interpretations made about Vincent Van Gogh’s painting (A Pair of Shoes, 1886). To him, trying to “render them to their rightful owner,” that is, guessing to whom they belonged, and whether the owner was a farmer’s wife (Martin Heidegger) or the artist himself (Meyer Schapiro). Those shoes are essentially offered to us as “detached from naked feet and from their subject of reattachment.” Neither gendered nor useful, they exist as objects. And as bodies: a product of culture, yet vulnerable and complicated.

INGRID LUQUET-GAD is an art critic. Based in Paris, she is the Arts editor of Les Inrockuptibles. Her research focuses on contemporary individualization processes and technologies of the self.