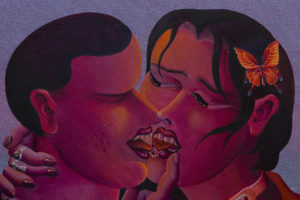 Through a kind of mimetic poetics, artist Jonny Negron (Puerto Rico, 1985) finds figurative expression for the alienation, absurdity and intimacy of contemporary living. From Telfar to tinctures, poppers to pill-popping, Negron’s latest body of work weaves together, with humor and mysticism, references to niche brands and hyper-syndicated rituals, building sensual scenes that reveal our nocturnal fantasies and their messy realities. In these tableaux full of bodies spitting and spilling, in lust and in longing, nightlife is a space of both escapist intoxication and ecstatic communion. Deftly cinematic and riddled with symbolism, these paintings also show the leakiness between commodity culture and outsider utopia suggesting how partying can be a cipher. 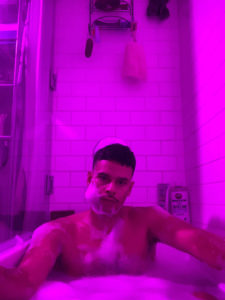 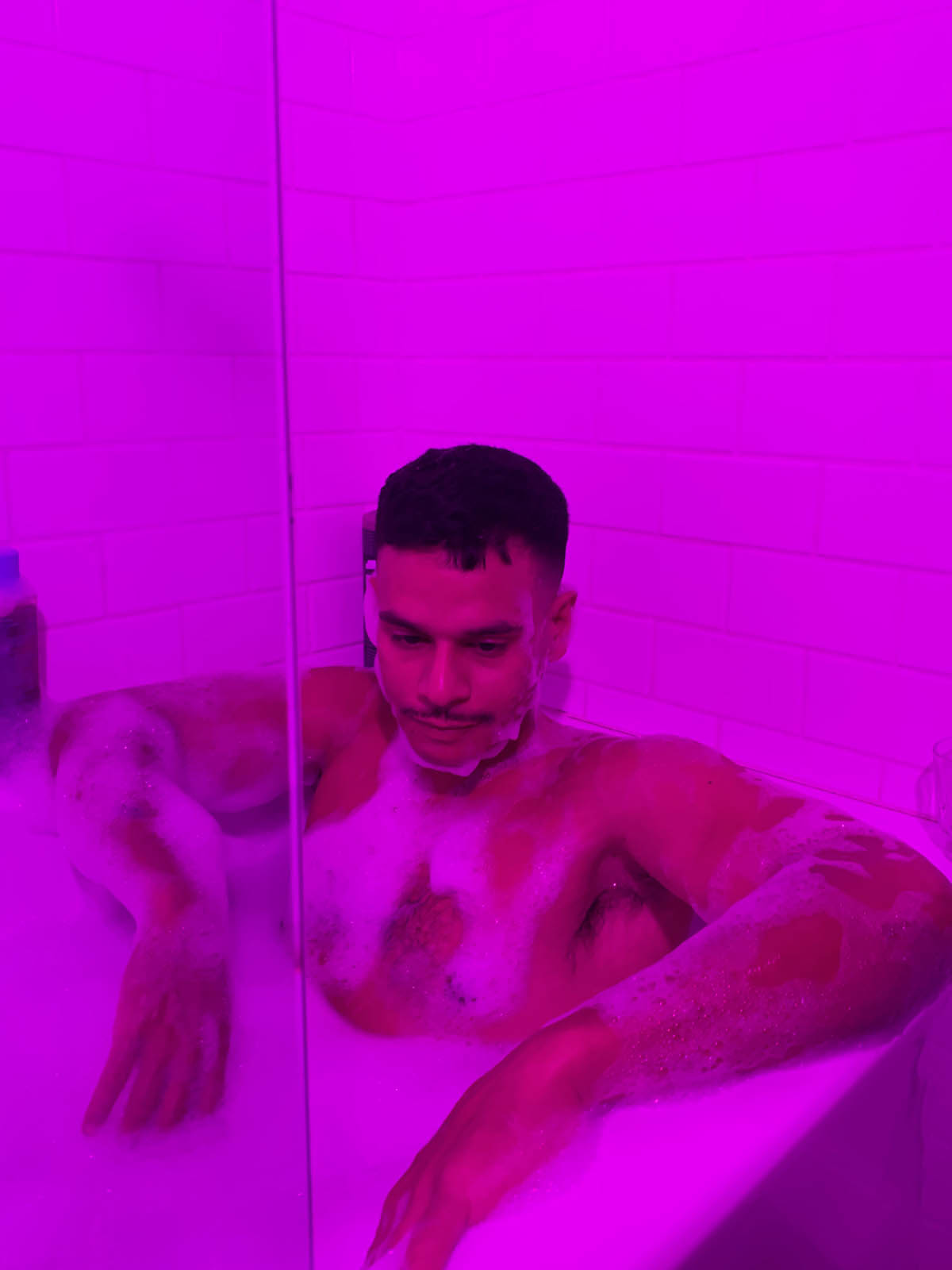 Los Angeles-based, Negron started work on this recent series of paintings exploring the nocturnal realm during the pandemic’s lockdown, when social distancing was enforced and restaurants and bars were mostly shuttered, the break in everyone’s weekend routines inspiring critical reflection for many. What do I miss most? What risks are still worth taking? And for some the party never stopped. In certain cities everything stayed open. In others, underground raves raged on. Nightlife is always a space outside the regular order of things, its own order forged by liminal forces, after-hours spots and outsider in-groups. The pandemic pushed its fugitive status even more to the fore—both in that parties became more illicit with cops busting them up with extra zeal and that nightlife has always been elusive, an ever-adaptable exercise in pleasure-seeking, quick to register our innermost desires, some of them outside mainstream culture’s bullshit, others informed by it.

As the world started to open, the first showing of Negron’s Night World series took place in Shanghai in November 2020, a solo exhibition at Mao Space titled Blue Dream. The paintings, all acrylic on linen and reveling in shades of cobalt and magenta, included Disc Woman (2020), a reference to the feminist-founded electronic music collective, depicting a DJ in a bondage harness manipulating Pioneer-brand CDJs with long pink talons; Perfect-Ion (2020), in which four bodies groove on a dance floor littered with cigarette butts, puddles of spilt drinks, and empty bottles and cans, one with a bubblegum-pink Telfar mini slung over their right shoulder; and Rave New World (2020), which shows a group of bodies choreographed around carrying a passed-out person, a Lamentation of Christ reference, with “LOGO” printed on the back of one in the group’s Off-White jacket, the garment itself a self-conscious nod to our brand-whore culture, but in the context of the painting also an allusion to Logos being a name for Jesus. Christianity may have been the original cult, but now it’s Instagram brands which are distinguished for their cult followings. 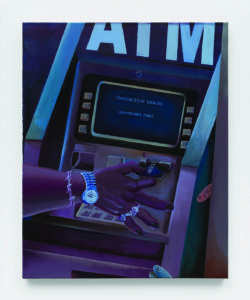 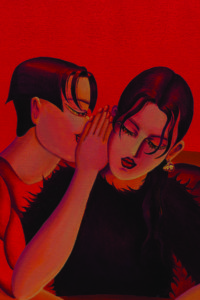 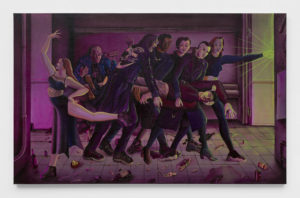 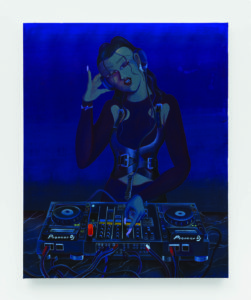 If fetish generally refers to three things, (1) Karl Marx’s ideas on commodities, (2) religious superstition, and (3) FetLife kinky sex stuff, Negron’s work is in conversation with all of the above. Fetishism is the attribution of inherent value or supernatural powers to an object. Commodity fetishism, according to Marx, is an extreme form of alienation induced by the structures of commodity-exchange in a capitalist society, erasing the interpersonal relations that produce the commodity. Beyond the obvious way that the aforementioned designer goods can allude to differences between worth and value—why does a sweat-shop-made thing sell for X, etc.—Negron’s hand often exalts objects, name-brand and otherwise, to a kind of mystifying effect. Watches, chains, and pendants sparkle with a kind of cryptic appeal. A Reber-brand Mozart-labeled chocolate heart mysteriously shows up twice in recent works. It’s a small detail on the floor, disregarded (so is the baffling presence of a tiny Pokémon, Mewtwo) by the procession of clunky footwear in Rave New World, as well as the only item centered amidst a wash of pink in the later painting Requiem (2021). The inordinate attention paid to this “specialty” but sold-at-Walmart chocolate brings to mind the horcruxes in Harry Potter, objects a wizard has embedded with a piece of their soul to achieve immortality (replace “wizard” for “artist” and this sounds a lot like real life). Whether the status of these objects is merely a send-up of 21st-century commodity culture, they’re sincerely suggested to have special powers, or some combination of the two, Negron’s fetishistic lens is undeniable.

The most explicit examples of religious and sexual fetishism, however, can be found in Negron’s older work, prior to these 2020–21 nightlife paintings. The artist whose practice today spans many mediums, including music, video, and graphics for apparel, initially became established through comics and illustration, producing a diverse body of work that continually revisited both occult and erotic themes. (Examples include the mystical “Anael” featured in Chameleon I (2011), an anthology Negron published with Jessie Balmer, and the chase/fight/fuck comic “Grandaddy Purple Erotic Gameshow” from the alt-erotica series Thickness (also 2011), a break-out moment for the artist). For Negron a shift of sorts to painting began in 2016 with the exhibition Formative World at Farewell Books in Austin, Texas, the series from that show being pretty impossible to consider without thinking about fetish. Multiple works feature a communion of red-cloaked figures, stoic yet tender, handling ritualistic instruments and wounded bodies, at times nipples and fishnets showing through their priestly robes. The Spanish Inquisition and sex cults like in Eyes Wide Shut or The Da Vinci Code come to mind. One of the paintings titled Ordo Virtutum, Latin for “order of the virtues” and a reference to a medieval morality play by the mystic Saint Hildegard, shows one of the cloaked figures holding a sistrum, an ancient Egyptian rattle shaken in the presence of a deity which I first mistook for a BDSM-esque torture device. A postcard from the show reproducing the gouache-on-paper work is accompanied by an unattributed excerpt from a sci-fi novel by William Olaf Stapledon, “strange that in my remoteness, I seemed to feel, as never before, the vital presence of earth as a creature alive but tranced and obscurely yearning to wake.” This sincere desire for transcendence, even when there are hints of satire or irony, is threaded throughout Negron’s work, and ever-present in the newer nightlife paintings too, which explore the potential for ecstasy in the club environment. Their nocturnal characters, for example, are rendered with a saint-like serenity, and the composition of hands passing a credit card (Valis, 2020) formally references Michelangelo’s in the Sistine Chapel. Rapture, it’s suggested, is possible even in this universe over-saturated by very material realities, from an ATM announcing insufficient funds (Can You Get To That, 2020) to status accessories like a Glossier lipstick spilling out of a Jacquemus Chiquito bag (If I Was Your Girlfriend, 2021). 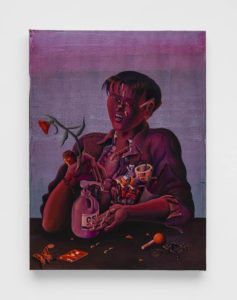 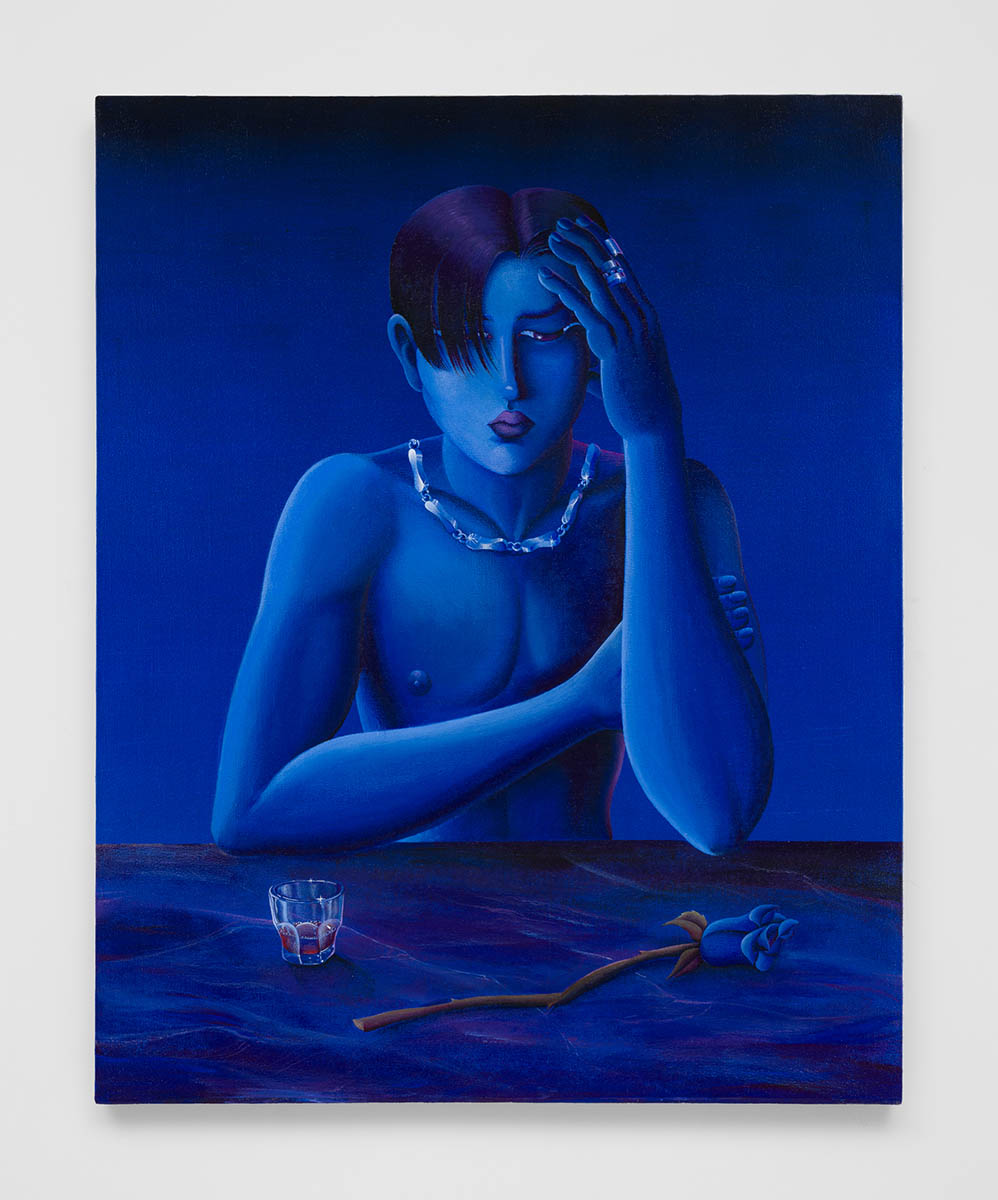 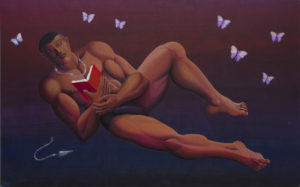 Symbolism is another way that banal consumer objects project towards another plane in Negron’s work. The artist has suggested that the presence of glass cocktail tumblers and other drinking receptacles throughout the nightlife paintings can be read through the lens of Tarot, with the suit of cups representing emotions. Some of the characters depicted with vessels around them are very much in their feelings. In Innervisions (2020), a figure with cornrows covers their face with their hands, a stack of four empty glasses on the table in front of them along with a coin, tails-side up—we wonder, did the everyday exercise in divination cause their despair or just the alcohol? Either way, the four of cups is said to appear when you’re feeling unmotivated or discouraged and can also represent our tendency to take things for granted. In KUN (2021), a commission for the Chinese pop star Cai Xukun, the singer sits shirtless and wistfully contemplative, a blue rose and a glass an inch full of a Negroni both in the foreground. The ace of cups is said to represent renewal and to signal your time is coming soon.

Phantoms are another presence in Negron’s work that suggest interplane transmissions. Frozen Warnings (2020) features a figure accessorized with facial piercings and a waist trainer sitting in a dusky blue light, the ghostly and sparkling outline of another body beside them, a protective arm slung around their shoulder. I wear your ring (2021) depicts a close-up of a hand with an artsy-industrial silver ring, a reference to Hannah Jewett’s jewelry design, and a phantom hand seemingly stealing the piece from the figure’s finger. Ghosts show up in older works too. J Lo’s Dress, for example, from the 2018 exhibition Small Map of Heaven at Château Shatto in Los Angeles, renders a specter of Jennifer Lopez’s infamous plunging Versace gown, floating eerily at night in a tropical forest that recalls the lush Puerto Rican landscape, as if the jungle-print frock is haunting its inspiration. And Villalba (2018), with ghosts hovering over the graves of Carlos Soto Arriví and Arnaldo Darío Rosado, two assassinated Puerto Rican freedom fighters, alluding to the haunting nature of colonization and continued occupation.

Pop culture and spirituality, the personal and the political all swirl in Negron’s work, suggesting interconnection and alienation across physical and fantastical channels. In these Night World works, an autobiographical portrait of the artist and their peers, out late and intoxicated by substances and emotions, finds a way to bridge the chasm between consumer culture and transcendent yearning, a complex and yet still often meme-able illustration of modern life as we know it, always with nuance and without judgement.

JONNY NEGRON
(b. 1985, Puerto Rico) lives and works in Los Angeles. For nearly two decades, the self-taught artist has developed a visual language through drawing and painting that is concentrated on social intercourse. Negron’s work connects a lurid lived reality, that is itself enmeshed with fantasy, with the abundant proliferate offerings of art history that provide evocative templates.

WHITNEY MALLETT
is the New York editor at Editorial Magazine and a contributing editor at PIN–UP Magazine. A writer and filmmaker, she has presented work at MoMA PS1 as well as the Baltimore Museum of Art, and currently is working on her first novel.