The exhibition is composed of an installation of HYPERVSN 3D holographic displays that project a range of imagery developed by the artist as well as a new series of wall-mounted brass panels featuring snapshot photographs from Wolfson’s childhood.

Throughout his career, Wolfson has examined the intersection of art, technology, and mass media, exploring the ways in which imagery and information are experienced and disseminated today. Using CGI animation, facial-recognition software, virtual-reality headsets, and advanced animatronics, among other cutting-edge technologies, Wolfson has continuously challenged the individual’s relationship to media, information systems, and technology within contemporary society.

In ​ARTISTS FRIENDS RACISTS​, Wolfson continues to probe American culture and contemporary life through an eponymously titled work utilizing a new holographic display technology made of spinning fans that have micro LEDs embedded in their blades. The LEDs are programmed to rapidly illuminate in a precise manner while spinning so as to create the illusion of holographic imagery floating in space. These unique devices have primarily been marketed for commercial use—as a means of luring consumers and presenting brands and products in a visually dynamic and novel way.

Wolfson’s work consists of fans programmed with animated characters, symbols, and words, including a cartoon heart, a puppy, and an imprisoned cat, among other imagery. Thematically structuring the visual display are a series of animated words that read “Artists,” “Friends,” “Racists,” which crash down intermittently. At times Wolfson’s animations overlay different photographs and video clips, some of which appear relatively innocuous—such as cookies—while others depict more overtly charged subjects, such as police cars and 9/11 firefighters. Viewed within the space of the gallery, the sequence plays out like a choreographed dance or a musical composition, with imagery at times synchronized—with multiple fans featuring the same projection—and at others times syncopated and incongruous. The visuals and animations appear immaterial and free-floating, as though superimposed over the material, physical world. 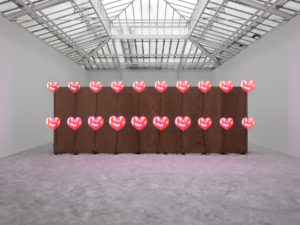 At once enigmatic, comical, and disquieting, the presentation highlights how symbols, characters, and even language have achieved a life of their own in today’s advanced image economy, existing like specters that reach beyond the confines of the media and systems in which they circulate. 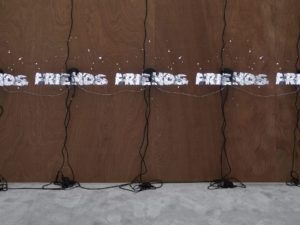 Also on view are a series of new wall-mounted brass panels featuring UV substrate prints of photographs from Wolfson’s childhood. Part of the artist’s ongoing series of sculptural objects mounted to the wall, these new panels are the most personal that Wolfson has created to date. In contrast to the advanced digital technology of the fans, the brass panels allude to ancient metallurgy, classical sculpture, and the radiant, gilded surfaces of churches and altarpieces from the Middle Ages. Isolated on the surface of the brass, the childhood snapshots attain a surreal aura while also being intimately linked to the artist’s own past and to the universal experience of nostalgia mediated through photographic imagery.