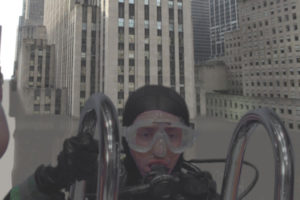 Intelligence is ongoing, individual adaptability. Adaptations that an intelligent species may make in a single generation, other species make over many generations of selective breeding and selective dying. Octavia E. Butler, Parable of the Sower, 1993

In her 1998 novel Parable of the Talents, Octavia Butler wrote of a conservative U.S. president in 2032 who sparks a violent movement around the campaign promise to “make America great again.” Aldous Huxley’s 1932 novel Brave New World introduces soma, a mood-altering drug used to cure unhappiness in society; this was written two decades before the first experiments with antidepressants. In his 1898 short story From the ‘London Times’ of 1904, Mark Twain writes of the Telelectroscope, an internet-like communication system that creates a global information network. And, of course, Jules Verne’s 1865 novel From the Earth to the Moon describes an international space race nearly a century before actual, historical events. The list goes on, and this isn’t even including countless examples from TV and movies.
What is so thrilling (or downright spooky) about science fiction is the genre’s ability to act as seer, to foretell of worlds just one step removed from reality, or to hold a mirror up to reality and accentuate its best and worst features. It’s uncanny. In his latest work—an ambitious short film called Adaptation (2019-2020)—Josh Kline channels sci-fi to show us a version of the future that is as communal as it is dystopic; it’s a prophetic glimpse into a world shaped by the destructive effects of the Capitalocene. And although Adaptation channels sci-fi in its mise-en-scène, the work is undeniably rooted in fact, that is, it depicts the havoc that climate change can and will wreak unless change is enacted.
Adaptation is set in Midtown Manhattan on an average day in some not-too-distant future. The film opens on a cityscape reflected in murky water; a bright orange recovery boat sails into the frame, past ocean-front high-rise office windows, and down what we soon learn are the submerged streets and avenues of New York City. The ocean has risen thirty feet, completely flooding the island. The boat is anchored somewhere near Rockefeller Center where, one by one, divers climb out of the water and onto the its deck. Importantly, this is a multi-racial, multi-gendered crew (and in other forward-looking works, Kline has referenced the fact that racial and ethnic minorities will comprise the majority of America’s population by 2042). They strip off their wetsuits and begin decontaminating their bodies and diving gear. After their hard work underwater, they sit together on-deck, laughing, sharing beers and packaged food. There is a melancholy about these sailors as they stare across the water and into the golden, late afternoon sunlight. The crew gazes forward. The boat sails on. The film loops and their day of labor begins/concludes again. 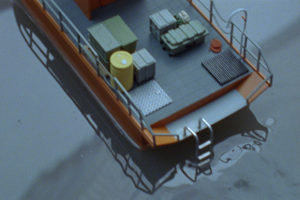 In its straightforward simplicity, the film leaves viewers wondering who this crew might be. Are they sole survivors of some apocalypse, salvaging wreckage from street level below the water’s surface? Are they scientists collecting specimens from the ruins of some waterlogged urban civilization? More likely, these are essential workers, employees of some civic or governmental entity who are going about the mundane tasks assigned to them. They’re just working their day job. In this light, Adaptation depicts an everyday world where life persists in the wake of the traumatic shifts caused by global climate change. Despite their situation and the unfamiliar world, they must deal with, there’s a kind of hopefulness within their normalcy. These people have clearly adapted.
Adaptation happens when human behaviors and routines are forced to change in response to upheaval. Adaptation is reaction and resilience. It is survival. Adaptation is exactly what people across the globe have had to figure out in the wake of the COVID-19 health crisis. It’s an all-too familiar reality and, even though Kline’s film was started well before the pandemic, Adaptation is incredibly poignant in our current moment. During the pandemic, there have been many instances of a communal, humanistic determination bringing people together so that society can keep going. And this is depicted in Adaptation through unglamorous maintenance work; we see the people who calmly clean up the mess after the crisis. In present-day life (as in the film), the civic body keeps moving through the efforts of sanitation workers, grocery store clerks, warehouse workers, truck drivers, agricultural workers, food service workers, and of course, medical staff. They are necessary. They keep order. Their quotidian jobs take on heroic significance.
Kline has stated that “Adaptation is both a film about the future and about the present that leads there,” and certainly it’s difficult to imagine one without the other. The work is part of Climate Change (2019-ongoing), the fourth chapter of the artist’s ongoing series of multi-media installations that similarly examine the complexity of life in the present times while anticipating the ominous future it shapes. The series began in 2014 with the project Freedom (2015-2016), which was inspired by the transition of power from George W. Bush to Barack Obama, the economic downturn, and viral political movements such as Arab Spring, Occupy Wall Street, and Black Lives Matter. This project was quickly followed by Unemployment (2016)—a vision of a future labor force made redundant due to technological advances in automation and artificial intelligence engineering—and Civil War (2017), which pictures an authoritarian state emerging from class inequality, divisions in labor, and the disintegration of democracy. Each of these bodies of work is concerned with the still-unfolding political, economic, technological, and biological changes that will shape life in the 21st century, on both collective and personal scales.
To depict a humanity that has been commodified and instrumentalized by neoliberal policies, Kline turned to celluloid film rather than video, which he had long utilized for its hyper-realistic CGI possibilities, commercial feel, and HD slickness. But the artist associated these aspects of digital video with the past decade and instead wanted his new work to be detached from any time or era. He explains:
“In 2017, I started shooting on film again—actual celluloid—for the first time since I was in film school in the late 1990s. In college I rejected film, which felt unaffordable and archaic. Video, which has always been more immediate and affordable, felt full of radical potential, especially with all its in-built affinities with digital technology. After more than a decade producing video art as part of my practice, I returned to film, looking for a new vocabulary inside the moving image in the 21st century. I didn’t want to make images that felt like they were from 2012 anymore—images that felt like they were trapped in some kind of post-internet cage. Film as a medium, because of its long use in cinema—and in sci-fi movies—has a timeless quality, a freedom from a specific time and place. It’s also a medium that carries a lot of nostalgia. In Adaptation the characters on screen look out on a devastated future New York. As the transformed city passes them by, there’s a longing that you can see on their faces—a longing for a lost world in their past. Watching this, I want viewers—as they think about their own futures—to feel a kind of nostalgia in advance for the world we live in now.” 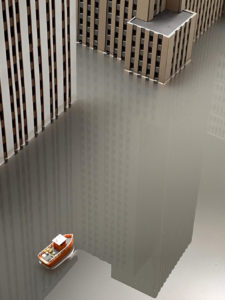 Kline used 16-millimeter film during two, technically involved shoots of Adaptation, in August and December of 2019. Working on a scale he had never before undertaken, the artist employed a full production crew and collaborated with talented artists from the film world. He worked closely with Kelly Jeffrey, the film’s Director of Photography, who recently won Best Cinematography in U.S. narrative category at the Tribeca Film Festival for the film Materna (2020). He also worked with Andrew Lim, the Visual Effects Supervisor, whose over fifteen-year career in film includes effect work on major releases such as Ladybird (2017) and Eighth Grade (2018). Drawing on the deep knowledge of Lim and Jeffrey, Kline realized his vision of a flooded Manhattan using pointedly analog effects. The result is nothing short of cinematic nostalgia. 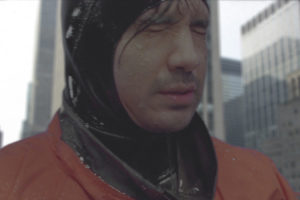 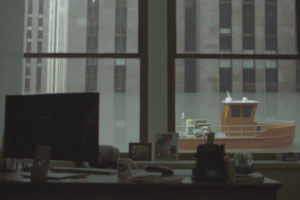 As he describes, “I’ve been especially inspired by films like Blade Runner (1982) and Alien (1979) which utilize earlier, more hand-made special effects—practical scale-models, miniatures, and blue screens. This method of working is grounded in the fabrication of physical objects and has a tangible connection to sculpture—but is also free of the many associations that contemporary tools of digital image manipulation are burdened with, especially their relationship to post-truth technologies and disinformation.”
As in the movie Alien, Kline’s everyday heroes are dressed in quasi-militaristic outfits: khaki sleeveless tees, army-green fleet jackets, and heavy black boots; along with the washed-out hues of the flood water and orange-ish daylight, the film’s color palette adds to a distinctly late ’70s feel. It should be noted that the leading actors from this golden era of sci-fi were predominantly white and that Kline makes a conscious and pointed break from (perhaps even a corrective to) this through his diverse cast. Additionally, the extreme verticality of the city around Adaptation’s characters brings to mind the hazy cityscapes in Blade Runner (minus the uber-futuristic neon). Coupled with the sculptural scale models employed in special effects, Kline’s vision of the future simultaneously looks forward and back.
That the film’s hand-made quality should speak to a simpler era of image-making is undoubtedly a byproduct of Kline’s ethics as an artist; the work is freed from hyper-stylized, tech-heavy cynicism of post-truth disinformation that plagues so much media today and, all too often, art. It slows down and lingers in a quiet promise that it might not be too late to imagine a better future for all. As Kline reiterates, “scientists tell us the world has only a short window to act in order to prevent true catastrophe.”

JOSH KLINE (b. 1979, Philadelphia, PA, USA) lives and works in New York, NY, USA. In fall 2020, Kline will have solo exhibitions at Astrup Fearnley Museet, Oslo, and at LAXART, Los Angeles. In 2021 he will take part in The Dreamers 2021 | 58th October Salon | Belgrade Biennale, Belgrade. His art has been exhibited internationally, including in solo exhibitions at: Modern Art Oxford; Fondazione Sandretto Re Rebaudengo, Turin; Portland Art Museum; Modern Art, London; and 47 Canal, New York. In 2019 Kline’s work was included in the 2019 Whitney Biennial; The Body Electric at Walker Art Center, Minneapolis; and New Order: Art and Technology in the Twenty-First Century at MoMA, New York.

CATHERINE TAFT is a mother, curator, and writer based in Los Angeles. She is deputy director and curator of the non-profit art space LAXART. She is currently working on a survey of ecofeminist art from 1979 to the present, which examines many of the same themes found in Kline’s latest work.