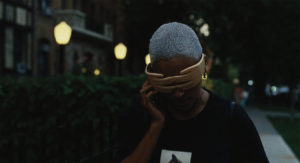 Kahlil Joseph’s videos are as convulsive and rhapsodic as the verse of the great modernist Langston Hughes. Like the jazz poems of this Harlem Renaissance bard, they are both lyrical and down-to-earth, abrasively real yet almost spiritual in their evanescence. And though caught in the “sweet flypaper of life,” as Hughes called it, they somehow find a way to fearlessly soar far above worldly concerns, achieving the weightlessness of an oneiric substance.

Like dreams, Joseph’s videos proceed by free association and by fragments, often uncoupling the normal link between picture and sound, and alternating high-resolution footage with grainy sequences shot on old video cameras or even on ordinary phones. 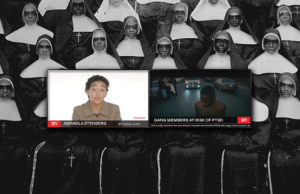 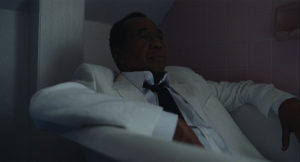 Music and noises burst in without warning and give the impression that these images arrive from a great distance, like memories or flashbacks. And even when he lingers over brutal details, like a volley of gunfire or a bleeding child, Joseph turns his images into a ghostly presence. They are often filled with a sense of impending loss, of grief and mourning.

Joseph believes African American culture was saved by music; the pain and suffering of slavery and all the subsequent years of oppression would have been impossible to bear without it, he says. In his videos, the soundtrack is as important as the images and becomes a true physical presence, with bass notes that rumble through the viewer’s chest. Blues, jazz and rap: almost every genre shows up in his videos, many of which were commissioned by musicians like Kendrick Lamar, Flying Lotus and Beyoncé.

But although his videos are rooted in hip-hop culture, his true models should be sought elsewhere. Photographer Roy DeCarava is the original source of Joseph’s obsession with black and white, with nuances of gray and shadow, with a blackness that is both literal and metaphorical. From director Terrence Malick, whom he has worked with in the past, Joseph has learned to look at everyday life with a sense of cosmic awe, while he shares his friend Arthur Jafa’s quest for a cinematic approach that brings the radical experimentalism of musicians like Jimi Hendrix into the world of film. From French director Chris Marker, Joseph has learned to think of cinema as a montage of archival and original images. And indeed, Joseph’s Fly Paper ends with a quote from Marker: “If they don’t see happiness in the picture, at least they’ll see the black.”

KAHLIL JOSEPH (b. 1981, Seattle, WA, USA) is a Los Angeles-based American artist and filmmaker best known for his large-scale video installations. Exploring film as a powerful collective experience that can be manipulated through its essential visual and audio components, his most recent and ongoing project BLKNWS reflects upon the contemporary period through samples of popular culture, archival material, and filmed news desk segments. Joseph currently serves as the artistic director of The Underground Museum, a pioneering independent art museum, exhibition space and community hub in Los Angeles that he co-founded with his sister-in-law, Karon Davis, and his late brother, the visionary artist and curator Noah Davis.