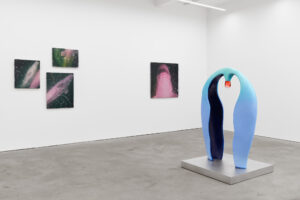 Katja Novitskova’s practice investigates digital data systems and their possible utility in a scientific, artistic and philosophical sense, by creating spaces of possibilities in which nature and technology are resituated through the transformation of the organic into digital imagery. Tackling ecological questions that expand beyond the anthropocentric worldview, the artist brings awareness to biotechnological matters, especially the impact of human entanglement with wildlife, micro and macro organisms. Novitskova further explores the possibilities of the creation, distribution and revision of digital im-ages as models of living things through algorithmic approximation. Using the digital image as a starting point, her sculptural work materializes mainly in aluminum, synthetic clay and polyurethane. 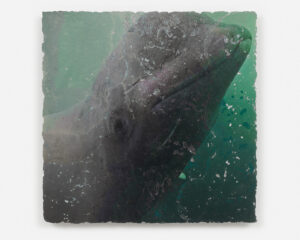 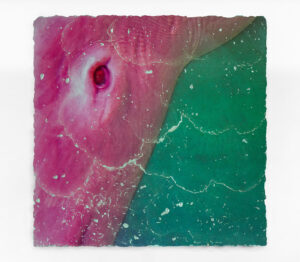 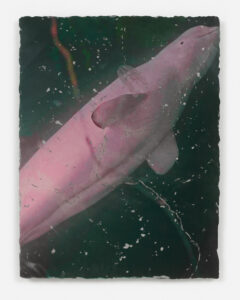 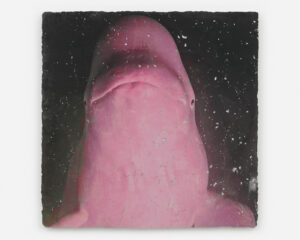 For her third solo exhibition at Kraupa-Tuskany Zeidler, Novitskova revisits an ongoing series, Approximations. As an experiment, the artist fed the documentation of her first solo exhibition at the gallery in 2012, to an image-generating AI algorithm. Approximation (Looking Glass Penguins), 2022 is notable for its bright blue colors, the popping red epoxy drop and a distinct smooth shape, is a mutat-ed, refigured artwork based on photographic documentation of her work Approximation I, 2012. The original artwork comprised a cut-out display of a penguin couple symmetrically arching their backs, heads bowed forward. Despite the relatively high level of detail it generates, the algorithm’s image out-put is rather indistinct and messy. By revealing the algorithm’s preferences for certain patterns—the apophenia of machine-human vision–the experiment cooks up a soup of meanings, patterns and references. The resulting sculptures can be thus seen as echoes or ghosts of the animals in the original images, their source photographs and, at last, the documented art works. They emerge as data zombies that crawl and reappear after being shuffled turbulently between physical and digital domains, breathing bodies, strong emotional reactions, online and offline attention markets and machinic ambivalence. Novitskova used these resulting visual matrices as approximations and predictive models for other new sculptures, Approximation (Looking Glass Beluga), 2022, Approximation (Apocalypse Caterpillar), 2022. Aiming to generate a new collection of possible works that inherit their own logic based on the artist’s ongoing series dating back to 2012. Approximation (Apocalypse Mantis), 2022 is the very first sculpture which came to shape out of this process. The sculpture is a multi-material assemblage, resulting from images of animals and scientific data, conveying an insect-like shape. Standing tall on a raw aluminum pedestal Approximation (Apocalypse Mantis), 2022, is an uncanny sculpture which is both a slightly disturbing representation of an unknown creature and a completely novel, illegible object. 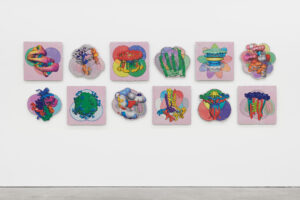 Split up in the first and second room of the gallery space, the wall works in the exhibition belong to the artists’ series of print ink transfers on epoxy clay titled Earthwares. For subseries Earthware (PDB approximation, emd…), 2022, Novitskova has paired up one of the randomly selected possible Venn diagrams with images of scientific models of proteins, viruses, and enzymes that were generated using one of the most powerful image-generating algorithms of today. The resulting works are an homage to one of Novitskova’s references and inspirations, Hilma af Klint. While af Klint sought to create diagrams of abstract spiritual realms, Novitskova aims to depict the realm of novel biotechnological possibilities within the artistic translation. The subseries Earthware (soft approximation, beluga 01,…), 2022 shows strangely cropped photographs of beluga whales. The original footage was taken by automatic cameras in the sea, which has been later uploaded to a citizen science website as a dataset to be indexed by volunteers. The indexing itself is used to develop an algorithm that identifies belugas and their various body parts in the dataset.The artist classified several hundred of these images and took screenshots of the most visually intriguing ones. Finding beauty and intimacy in the automatically composed and cropped photographs of the beluga whales, Novitskova reflects on the unprecedented access to animal’s life through large scale data. The smooth surface of the printed image which embosses the warbled terrain of the polymer clay, creates a surreal aquatic setting which engulfs the figures. Craters in the artworks are flecked with silver nail polish, and subsequently resemble chips in the surface of solid metal, which is both an organic element and an industrial tool to create artificial infrastructure. These elements afford Novistkova’s works with a material ambiguity, allowing them to straddle the line of realism and artifice. The atmosphere which binds the artworks is at once an eerie, alienating phantasm and a surreal interpretation of a natural environment. 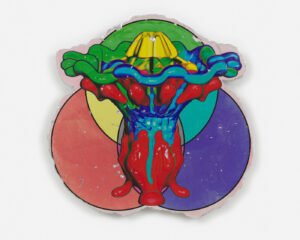 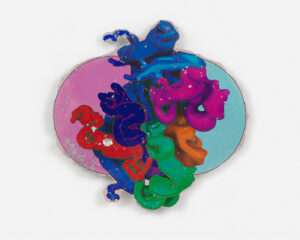 Novitskova’s work shows that the boundaries between automated, supposedly objective abstraction and more human qualities such as creativity and playfulness are increasingly being breached in the face of the rapid proliferation of AI and machine learning. The artist’s methodology is also critical of the prevailing notion that such technologies necessarily lead to continuous self-improvement and streamlined imagery. On the contrary, Soft Approximations exploits the glitchy underside of the point where the organic and the machinic meet, where technology deviates from the deterministic path and leads to an unpredictable outcome that generates its own fuzzy logic. 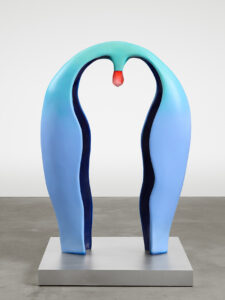