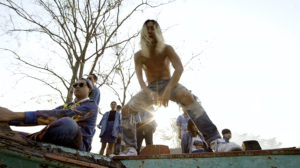 Adriana Blidaru: Let me start by asking you about the body of work that defines your practice and which also includes your latest exhibition: With History in a Room Filled with People with Funny Names 4. What is the story and the chronology behind this body of work, and how are the titles indicative of the internal changes happening in this series?

Korakrit Arunanondchai: The first work in this series was called Painting with History in a Room Filled with Men With Funny Names because it was specifically about C L E A R I N G Gallery and the context of the show. Back then there were only Caucasian men showing at the gallery (now this is not the reality anymore), and I wanted to frame my own entry in this circuit with the image of a group of all-Asian men. In Painting with History…1 I filmed a group of my Thai friends wearing denim, smoking cigarettes and catching up on life. It was intercut with YouTube compilations, like footages of Western painters making action painting. Could I find a place in which I can exist in the same room with both my Thai friends, smoking cigarettes, and with Western painters? In the beginning I was pulling a lot of references that were very local to Thais: a Buddhist painter who is akin to the Thomas Kinkade of Thailand, a body-painting performance by a go-go dancer on “Thailand’s Got Talent,” and more generally how Buddhism acts as the consciousness of Thai culture and the sex industry as the unconsciousness. The character of the Denim Painter in my work was like a membrane that connected many of these things. Then, the series developed further with the work Painting with History in a Room Filled with People with Funny Names. The idea of what Painting is or could be, became somehow akin to the image of the earth, as seen from above, from the viewpoint of a drone or a spirit. As the denim burns away so begins an upload of ourselves to a greater network where we are no longer human. And for the last video-installation I did, With History in a Room Filled with People with Funny Names 4, History becomes geological. We look at ourselves through what is left over after the upload: strands of DNA and human cultures as ghosts. 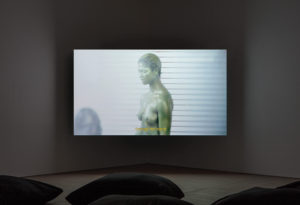 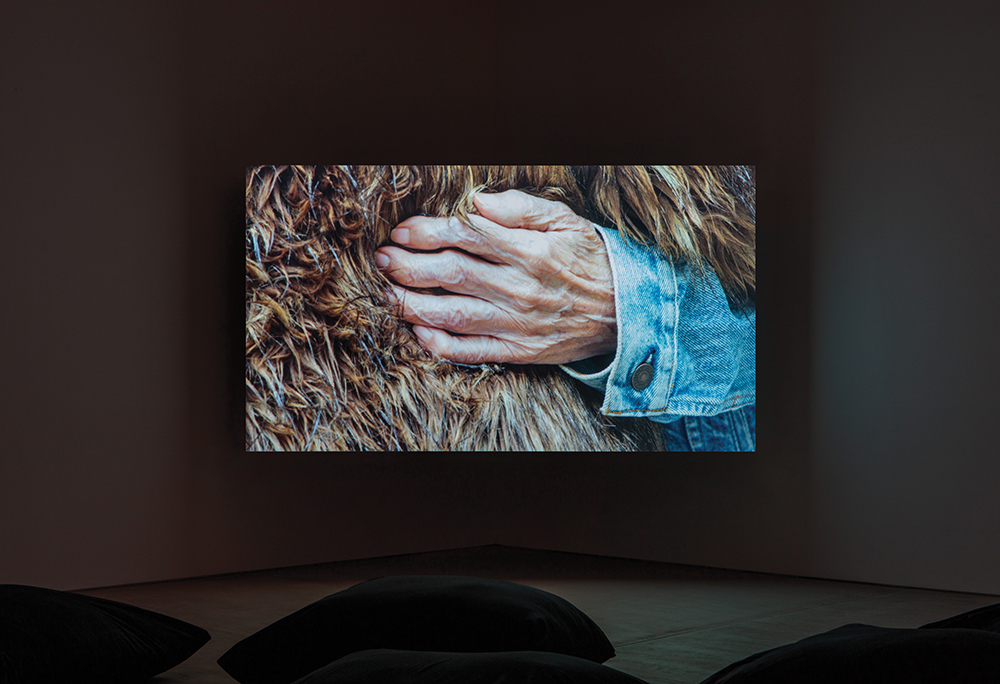 AB: This last work specifically is composed of three complex room-sized installations, including sculptures, a video, as well as a performance with your friend and collaborator, artist boychild. What is your process of making objects in relation to your videos and to the performances?

KA: Starting from a collaborative piece I made for Berlin Biennale 9, and up until the current show, I had as protagonist a giant post-human rat, based on an idea from the book The Sixth Extinction by Elizabeth Kolbert. From there, I made landscapes that resemble what the rat would make or live in. Entropy became a quality that united all these materials. Then I started working with dirt as a recorder of geological history, place, and time. A body of materials was then collected over a period of four months, while I was traveling to do video interviews and research. I went to South Africa for a residency in a safari, and up to Yale to work my friend Noah Sokol, a scientist who was figuring out the carbon cycle in the ground. As I thought about dirt and roots, different materials would come up. For example, I saw on Etsy this technique where you blow blown glass into a tree stump. The way in which breath is indexed by glass is incredible. Physical air bubbles that also happen to look like blood cells. In the exhibition these glass orbs glow to the sound of the breath from the video. Some of the objects were actually collected from places I filmed; like these banana leaf sculptures from the Naga worshipping site. They were being thrown away after the ceremony. I wanted to use materials that had a fourth-dimensional quality to them. In this case, they had a use in magical-thinking or in a belief system perhaps. Everything was made simultaneously and in relation to each other. I was editing the video and going to the studio to make the sculptures at the same time. When there were certain qualms where I couldn’t workout the video through language, I was working those problems out physically, in the sculptures.

KA: Garuda and Naga are two monsters-as-abstraction. I see these abstractions as technologies from the animistic past, that can talk best about the qualities that exist throughout the fabric of life. The Garuda is the bird man: the symbol of the Thai and Indonesian governments and of the Thai King as well. It travels in packs and governs the world from the sky. Think of the Garuda as a grid of control, exactly like the government, that looks at the world from this expanded networked vision. Naga, on the other hand, is a magical being, a mystical water-snake that lurks in rivers and in deep waters. The Naga is an anomaly: it’s magic, it’s a hack to the system. The Naga exists in almost every South-East Asian temple: it is the first animal that achieved nirvana but it’s also like a mascot for Buddhism. The Garuda and the Naga don’t get along and the Garuda always tries to capture the Naga. 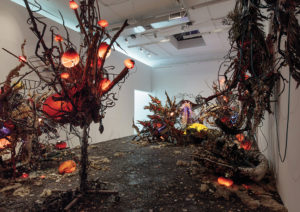 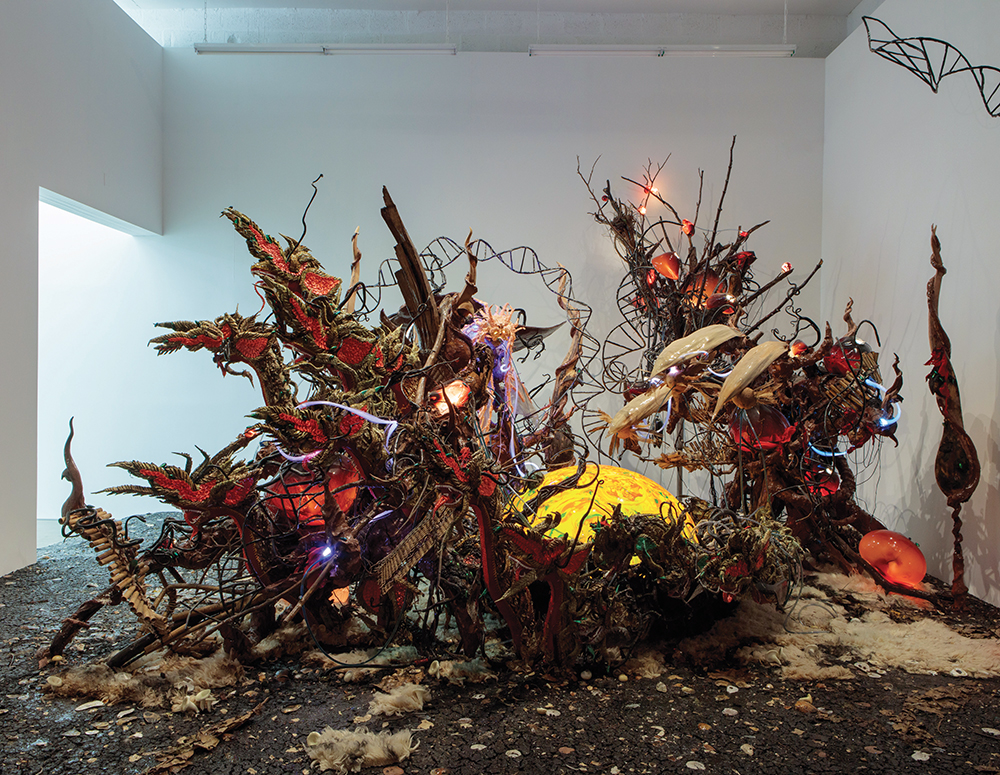 AB: Is there anything else in Buddhism that you are exploring in your work besides adopting the metaphorical meaning of these characters?

KA: I find the invisible underground economy within Buddhism very interesting. For example, the Wat Phra Dhammakaya temple, just North of Bangkok, is a temple that I’ve been following and filming a lot. It was protecting an abbot who was laundering money for the political opponents of the military government of Thailand. So at one point last year, there was a stand-off between monks and soldiers. In this case, you can think of the military as Garuda and think of the temple as the Naga. They are both literal and physical places. One is the visible grid of control, then the other one is the invisible grid. In her essay Tentacular Thinking: Anthropocene, Capitalocene, Chthulucene, Donna Haraway talks about the Chthulucene as the new ongoing temporality, defined as an entanglement of capital with political and human history, derived from the Anthropocene. She takes as reference the root-word Chthulu to highlight a complex intertwinement of dimensions, and to essentially suggest the need for us to find a new set of thinking tools, to enable us to live with this intertwinement. I saw in this a similarity with the concepts of Garuda and Naga.

AB: That’s true, it’s not very different. Storytelling and art are just tools of human evolution—the overlap in mythology and religion is not necessarily by chance.

KA: And music! Adam Curtis said this beautiful thing in an interview: “I actually care about music because it captures and communicates emotion in a direct way.” 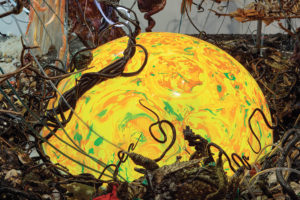 AB: Let’s make a leap in the future? If AI will completely transform human society and its trajectory, how do you think that would happen?

KA: If we start thinking about AI as ubiquitous softwares that are already being used and constantly in development, rather than a breaking point of super intelligence, it feels like they are already affecting us. These changes are subtle, systematic and cultural. Look at how the concept of neuro-plasticity works: a change in patterns of behaviors that alters the physical composition of the brain itself throughout time. A material change occurs. I don’t believe there is going to be a point where a super intelligent program is going to take over and shift the entire paradigm. If anything, I think that this is happening already. These systems are already in place and they go very smoothly with the current order of things. Like two people walking towards each other, one of them being humanity. This is kind of dark, but there will be no resistance. It is going to appear as a natural shift. I was chatting with Simon Denny about a similar point. When he was taking part in the Berlin Biennale he was following the narrative about blockchains as a political tool: a model for a decentralized form of governing. But now, as you look at how blockchains have been playing out into this past year, it seems that they, themselves, become points of power. The rules and the agenda of capitalism are still being followed. And power and resources are not equally distributed in capitalism, it is just shifting gears. Maybe there will be a new government or new banks because of this technology, but these new banks aren’t going to bring a huge ideological shift; they are still performing on the same hierarchical forms. It’s the same with AI: the company that owns the most big data is Alphabet, the mother company of Google. So I don’t think a super AI will be introducing a utopic paradigm shift. I think that even if in the future robots start making the calls, they would still serve the same agenda of the current oppressive system. 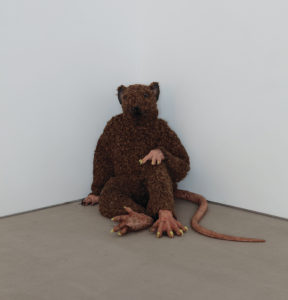