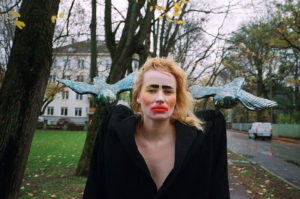 A red-hooded figure darts through the twisted, impossibly narrow alleyways and dead-ends that make up Venice. A glimmer of hope. A burst of color to momentarily dispel the grey drabness that settles over the floating city in the winter months. A red herring. Portentous, it spells out nothing good. In Nicolas Roeg’s Don’t Look Now (1973), death brackets the entire film. It also offers up the dark underbelly of Venice, the side that is masked behind its rich hues and architectural flourishes, a city where losing one’s way is the only way to move forward.

I was reminded of this Janus-faced characteristic while walking its streets for a few days in February—prime carnival season. Ghostly, masked figures (who do those layers of crinoline, makeup, fans, wigs, masks, hats hide?) standing stock still and upright on gondolas, blanketed by the winter mist and sun, traversing the Grand Canal or, most often, posing for tourists’ photos. A festive symbol, a caesura when social order and hierarchy are temporarily dispelled for the carnivalesque, but one that is no less tinged by its associations with the macabre (the long-beaked masks are not representations of some fantastical bird specimens, but part of the clothing once worn by “plague doctors” as protection against the disease).

It’s fitting to think of Kris Lemsalu at this junction of mortality and carnival who, as I sit typing, is busy concocting her blend of fantasia-meets-reality for the Estonian Pavilion at this year’s Venice Biennale. In 4LIFE, her solo exhibition held at Goldsmiths CCA in London last year, she spun us through a microcosm of life, the trajectory from birth to death relayed through a carefully-staged collision of glossy porcelain, kitsch, pop colors. If the exhibition pondered the route from life to death, the cartwheeling multi-limbed figure in Sally, Go Round the Roses (2018) was on a celestial route via its own stairway to heaven, albeit this time translated as the colorful wall-climbing grips (pseudo-rocks) that pepper walls in health & recreation centers, stand-ins for what nature has carved out en plein air. Caught mid-flight, its porcelain arms and legs poking out of a rosebud-pink and puckered fabric, could this be an erstwhile Shiva? The work’s title, a throw-back to the 1963 one-hit wonder by The Jaynetts (“Sally go ‘round the roses (Sally go ‘round the roses) / They won’t tell your secret (they won’t tell your secret)”), the catchiness of the song’s rhythm tempered by the ambiguity and haunting repetitiveness of the refrains, certainly are conducive to a co-habitation between dance and destruction.

In the preceding room, painted a dewy rose pink (of the “it’s a girl!” variety), an arc was sketched in the air by a trio of life-size clothes mannequins gracefully diving backwards into (or leaping out of?) a miniature Jacuzzi tub of gurgling, dirt-yellow gunk.

Not just any Jacuzzi tub. Mounted with what appeared to be an oversized textile-and-porcelain head and a sprawling patchwork-like skirt that sprouted a series of arms to cradle this mustard juiciness, HOLY HELL O signaled more of an emergence from a primordial soup, or the vaginal, bodily fluids of birth. Not for long though. By the exhibition’s finale, Biker, Bride, Builder, Businesswoman and Baby, only the outward cast-offs of these social archetypes were left hanging—sometimes, literally—in the darkened, strobe-filled space. The flesh, blood and bones that once filled a Babygro or a leather full-body biker suit vanished, evaporated. No longer present. Yet rather than signifying death as such, a full stop, this work is indicative of Lemsalu’s practice as a whole, its slipperiness, its refusal to comply with the types of social strata and modicums that Biker, Bride, Builder, Businesswoman and Baby, by its mere title, hints at.

Lemsalu’s work, as the person herself, if any such distinction can even be made, takes a conscious stand against categorization. For her Venice project, the ever so nonchalantly titled Birth V – Hi and Bye (2019), she has invited a team of collaborators, a cast of friends and mentors from across the world that includes writer Andrew Berardini, artist Sarah Lucas, and curators Irene Campolmi and Tamara Luuk, as well as director Michael Kleine for a performance during the pavilion’s official opening. Collaboration is a method of working that suits Lemsalu, whose imagination feeds off her travels and encounters. It is an invitation to offer up multiple perspectives and exchanges, to bring out the strengths of those she admires and respects; a refusal to worship the individualistic ego. This is naturally the case for an artist whose own appearances are a plethora of characters performed for the camera and for the public. 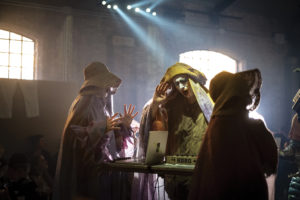 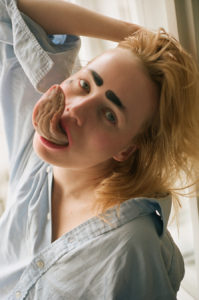 In an accompanying photograph to Birth V, she appears pig-tailed and semi-submerged in a bathtub, face whited-out, red-tipped nose, smudged mouth, two green-tinged fat dashes for eyebrows, framed by a red inflatable heart. Elsewhere, she has surfaced enveloped by sleeping bags, burning toothbrush balanced precariously between her teeth; in a flesh-colored bodysuit adorned with tits and udders, a constellation of chicken eggs hanging chandelier-like in between her legs; or a bare-breasted Queen of Hearts, punching gloves at the ready. In fact, the first time that I encountered Kris in a natural state (or was it?)—face scrubbed clean, hair pulled back—a part of me remained on the alert, unsure of whether the live image I was seeing over Skype was one and the same as the figure who looks like she’s been transported from a shamanistic ritual, Grimm Brothers fairy tale, folklore of years past or an otherworldly rave.

Whether through sculptural installations, in which ceramics occupy a central space, shared with textiles, found objects, fur, leather and wool, or performances in which these temporarily inanimate objects are manipulated by the artist’s own body, Lemsalu’s is an art of metamorphosis that defies the act of naming. The animal kingdom takes on anthropomorphic features (or perhaps it’s the other way around), nature melds itself with artifice, life and death flow seamlessly into one another. Tinged with whispers of mythologies, rituals, cults, pop culture and music, all put through a mincer of dark and slightly awkward humor.

Boundaries and binaries dissolve. Like in Whole Alone 2 (2015) during Frieze art fair, in which Lemsalu lay inanimate, splayed out on a raised waterbed, only her arms, legs and hair visible from beneath a giant, jewel-encrusted, porcelain carapace of a tortoise while all around her buyers, sellers, and lookers-on mingled. The artist as an oasis of calm, still for hours on end, melding into the protective armor of the polychrome shell. Or in the ceramic hoody-wearing outline of a figure (I say “outline” as there is no one or nothing inside the petrified material) that sits atop the erect hull of a real-life boat in So Let Us Melt And Make No Noise (2017), a Grim Reaper of sorts if not for its cartoon-like rope legs left dangling below. The river this vision of death floats down on is composed of blue party balloons, no longer merrily airborne, but neither fully listless. If we remember that “So let us melt, and make no noise, / No tear-floods, nor sigh-tempests move,” perhaps the journey is not as dark as might be.

And if it’s not the real thing that we’re seeing, does it even matter? In 2017, Lemsalu conceived a performance in collaboration with the musician Glasser for the David Roberts Art Foundation’s 10th year anniversary, celebrated at London’s KOKO. At the former theatre, whose glory days had already come and gone, a lone figure appeared on a gilded balcony. Draped in an oversized pale blue, hooded robe, dotted with pink feathers, her face a medley of colors, she sang on repeat “In heaven everything is fine,” flanked by four “archangels”. These silent sentinels were David Bowie, Prince, Leonard Cohen and George Michael. Or, rather, professional impersonators: phantoms of the music legends who, themselves—the real thing—had all in the preceding months quit this world. A song of reassurance capturing loss, of what is gone and what is left behind, an exquisite mix of beauty and pain.

To return to the carnivalesque: as once described by Mikhail Bakhtin, it signals a transcendence and momentary flattening of social hierarchies. Applied to Kris Lemsalu, it extends to materials (the preciousness of porcelain attached to a budget nylon sleeping bag), references, and quotes, not to mention the themes that are hers. Taken together, they sketch out the formlessness—the ridiculousness, even—of what we call life. Yet they do so not to denigrate, but to lift up, with a song and a dance.

ANYA HARRISON is a curator at Mo.Co. Montpellier Contemporain, and Assistant Curator for the Pavilion of the Republic of Kosovo at the 58th Venice Biennale. In 2017-2018, she was part of the curatorial team of the 13th Baltic Triennial, which took place across Vilnius, Tallinn, Riga and London. Her writing on contemporary art and culture has appeared in Frieze, Flash Art International, Garage Magazine, The Calvert Journal and in exhibition catalogs.