in conversation with Fiona Alison Duncan 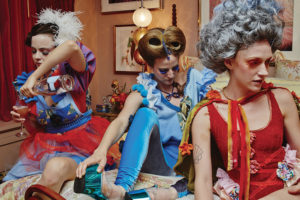 Lou Dallas has been ambling around New York City since 2013, though her officious history starts in 2016 with Spring/Summer 2017 Fashion Week—a first formal showing. A character composed in a clothing line, Lou Dallas is the creation of New Yorker Raffaella Hanley, a late-twenty-something who studied painting, and who is now partnered with Kiki Turner on this venture.

A time traveling adventurer, Lou Dallas (whose name comes from Korben Dallas of Luc Besson’s 1997 sci-fi romance The Fifth Element) has been party to Marie Antoinette’s court, a gardening sprite, a cowgirl, a street protester, and many modes of regal. We talked with Raffaella Hanley and her business partner Kiki Turner. 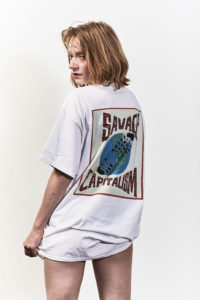 Fiona Alison Duncan  My first question is for Raffaella and that’s whether people mistake you as Lou Dallas?

Raffaella Hanley Yes. More often in email. But occasionally I’ll be out and someone’s like, “Hello Lou!”

FAD Kiki, when did you get involved and what’s your role in the project?

Kiki Turner Me and Raffaella have known each other for a really long time. In the past, with the first collections, she’d have me come over to ask and answer questions. Now, for this collection, we were sort of telling each other a story and building off of it.

FAD Can you tell us something about the collection you’re working on now?

RH I’m kind of superstitious about sharing while it’s being made. I’d prefer to keep it secret.

KT There’s a palette in place. Would you feel comfortable talking about that, Raffi?

Sure. We’re working with some donated fabric. One in particular triggered inspiration for the colors. We want to be working with a lot of violet and a burnt orange red color.

FAD How do you know each other?

RH We met in preschool.

KT We became friend-friends when we were 7.

FADWhere did you guys grow up?

RH New York City. I was in Tribeca, Soho, and Red Hook.

KT I grew up in Tribeca.

KT I feel like we played a lot at Raffi’s once she moved to Brooklyn and had a house-house. We had a years long project that involved collecting as many Beanie Babies as possible and doing photoshoots. We were in togas with the Beanie Babies.

FAD I want to create an image of where your clothes are made. Where do you work? Bright lights? Is it ever dim? Are you ever multitasking? Is there music? How many sets of hands are crafting the garments?

RH There’s a revolving door of different hands who have helped with different garments. Most of the clothes have been made in my house. Kiki has taken home some of the shirts and sewn them in her house. So has my friend Emma. I also work with a machinist who will take things home to sew.

A lot of times when interns come over, we’d all be sitting in Raffi’s living room and working in a circle. Like a quilting circle. 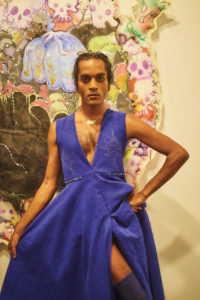 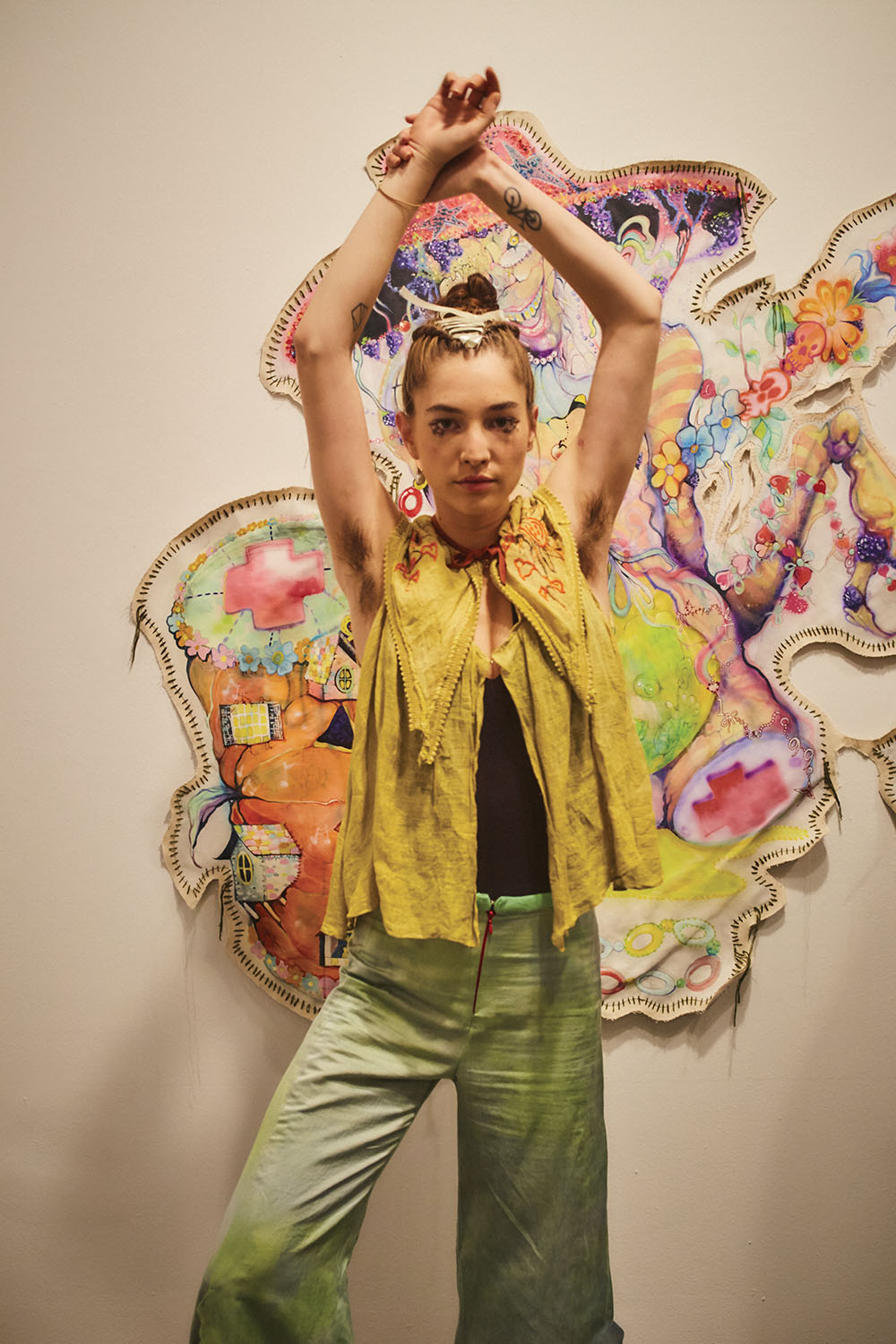 FAD The impression I get from the clothes—and correct me if I’m wrong—their uniqueness and asymmetry or patchwork reminds me of the way I’ve painted and have seen people paint, where the process is intuitive or gestural, layering until it’s right.

RH I think that’s how it started out, but now the goal is to have more structure to how things are made. Looks are being thought out more in the beginning stage, as opposed to this add and subtract method. As I’ve gotten more confident with this medium, the more I’m learning about it, the more I’m intrigued by figuring it all out at the beginning, and then executing it.

FAD When did that shift happen?

KT Raffi really started working with patterns with “Earth Everything” [Fall/Winter 2017]. And with this last [Spring/Summer 2018] collection, “Sod Walker,” there was a desire to be able to make more than one of each piece. There is a funny couture sensibility to the way the company is made. I think the painterly aspect is really apt for Raffaella’s initial work. That’s something we’re preserving in the collection, but there is a new idea of having a plan so that we can make orders, so there can be reproduction.

FAD I thought we could play a game of association. I’ll say words I associate with Lou Dallas and you can riff off of it. Let’s start with freckles…

RH Those started to appear in our “Plutonian Tears” collection in the makeup. I guess I thought… I just like freckles.

KT I think in some ways it’s like a splatter paint effect. I think the makeup artist was thinking about splattered mud on that occasion but then it came across as fashion freckles.

RH I like with dying how it can become similarly speckled—when things are hand-dyed, it can’t be perfect, it’ll clump, and it can come out as a kind of cosmic starry sky.

FAD What about “maturity” and “immaturity”?

RH I think I like thinking more about innocence, purity, and romance, and the edge of that, when you’re deviously being innocent or naive—I like that kind of play more.

FAD Yeah. I get that impression from the world, like it’s make believe that knows what it’s doing, there’s agency and control.

RH I’d like to think about the clothes as sort of childish yet sophisticated.

KT I think there’s a sense of a maturity, once reached, that gives you a strong position to play.

FAD What about deterioration? How do you feel about your clothes coming apart?

RH I think there’s a romance to a piece of clothing coming apart. Like a wedding dress of vintage fabric that’s danced in all night and comes apart in tatters—I think that can become a wonderful story. I’m not opposed to the clothes having to decay. But I want to make pieces that last. Craftsmanship is important.

FAD What about cowboys and cowgirls?

KT: We could talk a bit about the origin of the name? That character’s kind of a cowboy.

RH I like the idea that Lou Dallas is always on the next frontier—exploring, constantly on the move.

KT There’s a lawlessness that we kind of picture this character of Lou Dallas having.

FAD What does lawlessness mean to you?

KT We see Lou Dallas as having a magpie-like attitude where the rules of ownership don’t really apply to her.

RH It’s reminiscent of a little girl being like, I just really want that, without realizing there are rules in society—you can’t just take that candy bar, you have to pay for it.

FAD The clothes to me evoke all kinds of feminine fantasy realms. I was wondering if you exist in such fantastic states in your everyday, if you story your life or the people in your life as romantically as you make clothes.

RH I feel like I can look like I’ve stepped out of that world if I’m wearing the clothes, but it belongs to the world of Lou Dallas, and that’s different than mine. My hope is that, in wearing the clothes, you feel a change in yourself because the clothes are transforming you and dictating your mood with them. I can sometimes live in that world, but I can also just put on my jeans and not have to be in direct contact with that. I don’t think the personality of Lou Dallas is my personality.

FAD And you think of her as a character?

FAD Could we detail her character a little more? Is she solitary or of a community? Is she contemporaneous? A time traveler? How old is she?

RH She is solo, can time travel, is of any age, and can take on any gender.

FAD Do you have any looks that stand-out as favorites? High points?

RH The last look in “Plutonian Tears,” which was a gown—it was green and covered in Swarovski crystals—is a favorite. I have a lot of favorite looks from the last collection. It was really fun working with artist and tattoo artist Will Sheldon and getting to embroider his drawings. We did a presentation after that at White Columns in New York as part of the closing of Will Sheldon’s show there. We also collaborated on an artist’s book. He would send me a drawing and I’d draw on top of it and we’d just collage this book together. It’s this abstract offering of images.

FAD One of my favorite collections was “Earth Everything.” I think because it seems the most mature or covered up, wearable for me. What were the points of origin for that collection?

RH I remember I looked at a lot of old fashion magazines, these Italian ones that had all the runway shots. I remember just poring over them. What’s funny is what I was looking at is not what you end up seeing. There was a tier system to that collection also. It was supposed to be a procession almost.

KT Yes. I found some texts by this historian who writes a lot about 1780s France. He described a procession in a small town: first the church officials come, before them are the children in rags, then the Mayor, then the proto-business men. Your place in the society was based on your place in this procession. The runway was like that.

FAD There’s definitely a bourgeois or upper crust feel to parts of the collection, like a cafe or salon host.

RH There’s uniforms too, almost a Star Trek feel in one of the outfits, and like an otherworldly street protest feel in another.

I think there’s an awareness of the bourgeois in that and the most recent collection. Raffi often has a category in the collections that’s representing how society tries to emulate a higher class of that world.

RH Especially in the last collection. “Sod Walker” pictured a field with a castle in the background. The story was, in the beginning, you have women working in the field who felt really connected to the plants and who were the caregivers; and then in the middle were, hidden under the leaves, these manic, losing their minds, enveloped and hidden creatures; and then the last ones were the ones who wished they could be in castle but couldn’t be so they were supposed to reflect what they thought people in the castle dressed like.

FAD Last question. Having known each other for almost three decades, could you say something about how one another have changed or stayed the same?

KT I think we’re both kinder to each other. We both grew up as only children in our houses. Our play would be like, telling each other what’s happening. I remember Raffi, when we started working together, your mom said to my mom: “So which one is bossing around who?”