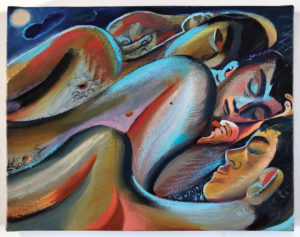 they also appear most serviceable to the preliminary drawings of painter Louis Fratino. “Drawing grows disorientated,” Koestenbaum continues, “loses contact with its supervisors […] that amnesiac medium, lacks the intelligence, (or the ordinariness) to remain accountable to its master.”2 Drawing, then, is errantry, stumbling into life as the trial, the warm-up. Fratino’s paintings, too, refuse to court monumentality in the same sense as Eve Sedgwick articulated queerness as the refusal to signify monolithically. Fratino’s works fraternize with ellipses, interludes, lapses and resonances, the minor (as major) oases of pleasure.

To verify an internal fantasy; to sacralise erotic errands. Fratino’s stylized subjects—realized in oil, crayon and pastel, or charcoal and ink—are often encapsulated in these apprehensions, coupled, as though each canvas were an accidental lily pad of ephemeral bliss. Fratino combines the domestic themes of Intimist painters such as Pierre Bonnard and the perspectival effects found in works by Felice Casorati, with the exaggerated figuration and placid sociability of Nicole Eisenman. Fratino’s paintings are no confessions of desire, which would truly be perverse given their glorious merry-go-round-meandering of peachy faggotry; rather, they are impassioned dedications, tributes even, to the people who enrich this kid’s memories. Couple with Full Moon (2016) is a ravenous mergence of two men, their limbs arching and hugging in a playful grappling of al fresco fuckery. More than a hook-up, the effect is nested—engulfed. Most lovingly portrayed, the nape. Empty Sunny Room (2018) squares from below a naked standing man; hands clasped behind his buttocks in a room as pale panna cotta flecked with orange, its effect like sliced nougat; his button nose, eye and lip line licked cerulean. Parading the bravura of process, his ursine thighs buttress his furry ass; the texture of his pubes mattifies the scope of his crotch, thoroughly lavished, his balls centralized. I know this view. Quit the penis talk, to organize a discussion on masculinity, the balls are surely the dark horse storytellers. 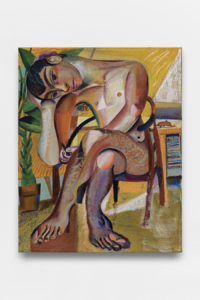 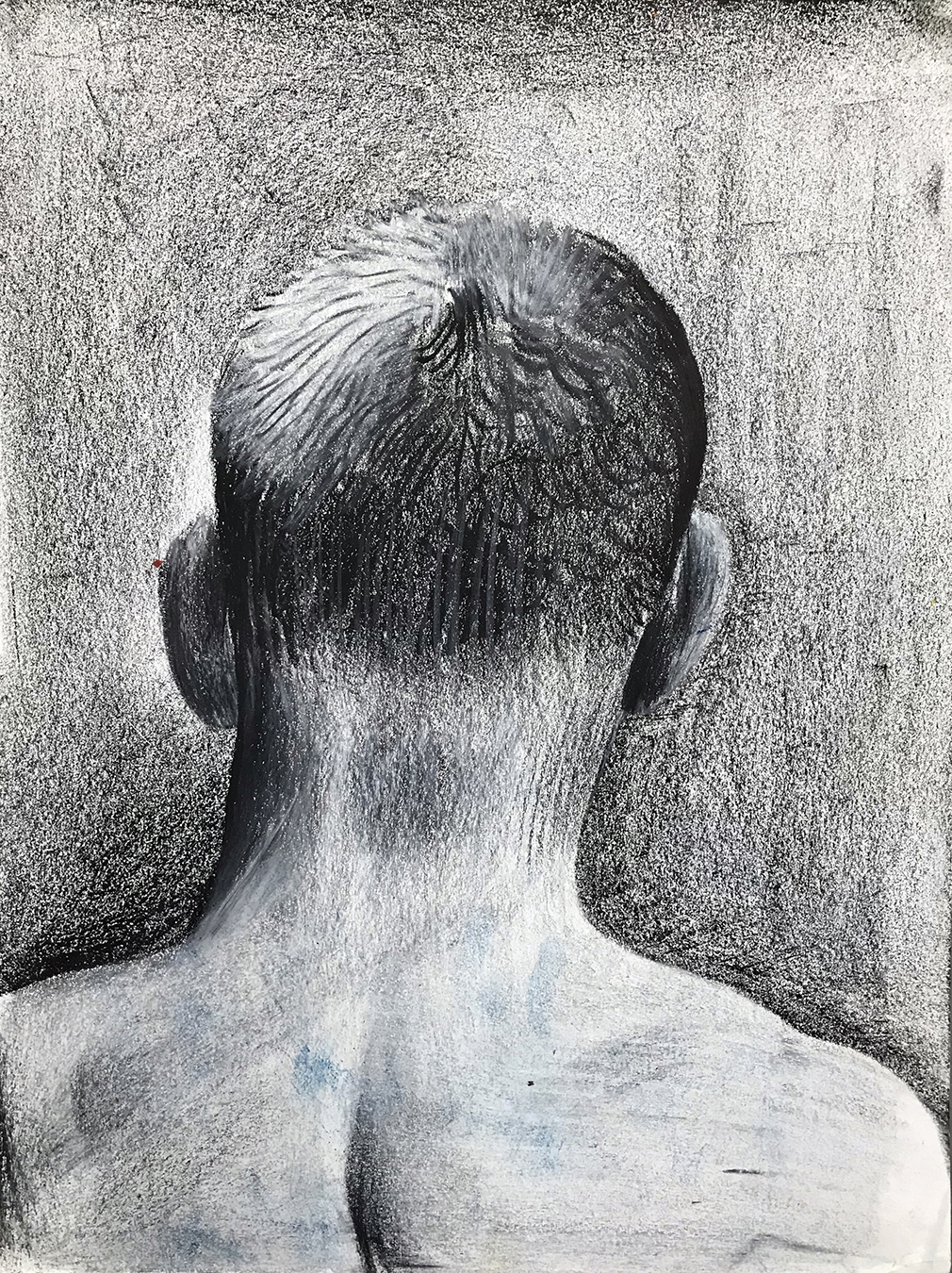 To draw the non-existent into actuality. Drawing’s gift to lose track and trip into the doodle aligns it to the incomplete, the excursive, the blundered. Fratino toys with this value system, though his painting’s surf the gliding muscles of historical flesh: Matisse’s nudes meet Hodgkin’s hues and Eakins’ studies. Fratino’s surfaces develop a mille-feuille elaboration: preparatory drawing follows oil paint developed to a waxy surface, accommodating additional marking. Excluding a couple of pastel nudes more than six feet tall, Fratino’s paintings are often small in format. From the smeared language of history, it is a double ally of inferiority, its tasselled epaulettes: the petite drawing. Drawing’s “second-class status increases its eroticism,” Koestenbaum writes: “the more ‘pathetic’ an erotic practice, the more I esteem it. The more ‘pathetic’ an artistic medium, the closer it resembles my ideal sexual underground.”3

Diaristic. Even with a capital D, the term serves a suppressive welcome mat to the entrance of these intimate realms. Like every great diary though, the best is left unsaid, and it could be suggested that Fratino’s scenes are caesurae, the noteworthy in memory, tonic to the dominant with elements bleeding, as the artist says, into “one long changing body.” As nuances in time they breed further subtext, subtext-on-subtext, does that become the master narrative, the supratext? Fratino rolls intimacy in the palm, its textures explored on a first-hand basis: lovers, friends, companionship and kinship are replete with the lulls of charm reducing into honesty’s brace; all imbued with palpable affection.

Masculinity is here a truffle. Taken out of exchange, rimmed and savored in the mouth, a circling tongue at once softening and describing its subtleties. Mas-cu-line: mask, ass, line, me. ‘Masculine’: melt; like a key that mellows to butter as you turn the lock.

It may open out to Furnace (2018), two men nodding off, minds suspended, thoughts vanquished, in an embrace within magma-like luminance. Or Grapefruit Breakfast (2017), two men breakfasting naked at a table: one sips from a mug, another squeezes the last of the juice; flares of ultra dahlia-pink, electrified purples, and modest corals ripple the scene. In its own way, domesticity is diamondized. Space fully occupied, espy a blue foot in the lower corner. As with the velveteen evening of ass-eating in March (2016), Fratino’s rumination on intimacy sets the point of any realism: that it is a stricture, which ultimately breaks down. Cloven by nature, realism is best served liquescent.

I don’t know when knowledge of a body is ever satiated—perhaps this is the point. Self-love is a useful preamble to such lessons, and Fratino explores this in Red Figure (2017), whose interiority is deep-set, but buds from the hole. Butt to the ceiling and lobster-red, the figure is arranged to luxuriate himself, rotate fingers, discover cosmologies, as a lover looks on, though it is a state of interiority, a personal prelude finished with the flat indifference of a roseate sole facing you. In these occasions, roles and attitudes are stripped to reveal the luster of what is. There is real elegance to complicating, for your own pleasure, male physical ‘harmony,’ to screw with it, annex it, adorn it, crumple or hyperbolize it. In Tristan in the Bath (2018), the charm is all smoke and spearmint as water lips his midriff. With his planar pectorals, arms-raised, a reclining nude in Two Figures (2018) provides access to an under-arm whiff for another, like shelter; bulging and slender, the cygnine curves are full-blown ode.

Torches and the moon irradiate gradients in Beach at Night (2017), a rare vision of faintly celestial group activity. In their own way, ten couples hold or are held by one another, and these rare collective arrangements in Fratino’s work spell out a sense of planetary cohesion, something delicately spiritual. The improvisatory, jouissance-oriented playfulness bumps into history: Madonna-like, a turquoise woman cradles her pregnancy as crabs skitter across the sand. Similarly, with Dessert of Cherries (2018), friends sit with a plate of four cherries in the centre, one lone candle and a woman’s pale palm upturned, like an offering, or séance. Most ornaments, from conch shells and playing cards (king of clubs), to pitchers, carafes, and the odd doodle reading B-R-U-T-U-S, have a Grecian allegorical panache.

Erotics are a fringe practice, ruched, ever the shoreline. With his frontal attention, then, Fratino ultimately makes work on care. He reminds me that the values of moments are always relative, that memory’s marble is always just that: construal. There are echoes I share, where accidents dropped like a bag of gems between us, my partner and I, where I clocked the accidents of his skin before he enveloped me, where I clocked my beveled resistance before he made time vanish. I saw myself clearer; and I will see him tonight, in some form or another.

CREDITS
All images Courtesy: the artist and Antoine Levi, Paris