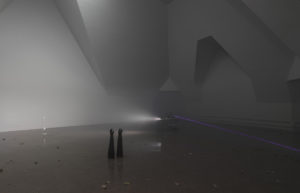 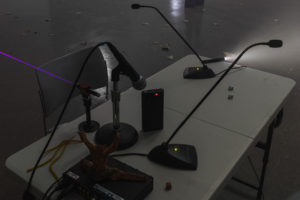 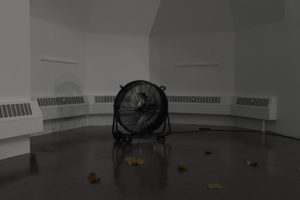 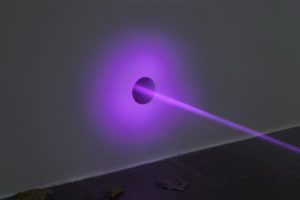 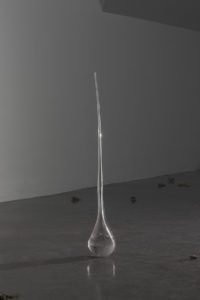 As I write, Lydia Ourahmane begins the seventh day of a two-week pilgrimage through the desert in the far southeastern corner of Algeria, the country where she was born in 1992 and whose compounding histories of colonial occupation, hard-won liberation, radical anti-imperialism, and subsequent civil war often serve as a backdrop for her art. At present she is traveling by foot with a group of collaborators in Tassili n’Ajjer, a plateau of caves layered with petroglyphs etched into or painted onto stone over the last 8,000 years, to make a film for her upcoming solo exhibition at SculptureCenter in New York. Ourahmane describes her trip as treading along the threshold between the living and the long dead; between the present and the waves of social and ecological transformation of time immemorial. Simultaneously she wades into a space that was opportunistically “discovered” by French explorers in the 1950s and has since remained under tight bureaucratic control. Today access to this place is typically restricted only to Algerian citizens, a form of protection from international speculation and extraction, but also serves as a traverse for those aiming to cross the continent undetected.

The sum of the last eight years of Ourahmane’s work is a “dogged pursuit of the eternal,” as aptly described by writer Fanny Singer in a review of Ourahmane’s 2020 exhibition at CCA Wattis in San Francisco. In that exhibition, two sound works—one a recording of an operatic voice singing two dissonant notes ad infinitum, one a metal detector screaming for a hidden prize—obliquely rehearsed and re-presented the haunting, half-human drone of Tassili n’Ajjer, a kind of bodily tenor perceptible only in silence. Ourahmane’s work has often amplified the harsh buzz of feedback, intercepted fragments of audio, or transmitted other acoustic anomalies through gallery spaces to make a metaphysical dimension of the networked air around us more palpable, positioning listeners both as mediums catching messages from beyond and as subjects of surveillance, eavesdropped by an omniscient other. 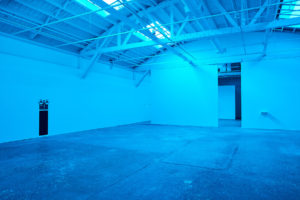 From within such heightened spiritual environments Ourahmane’s affecting work has entertained both fate and its fallout. It goads on the inevitable and meets its complexities, treating the chance of one’s own experience not as an end but as a beginning, and art as a method to draw toward and away from the self at the same time. For Barzakh, a recent solo exhibition at Triangle-Asterides, Marseille, and Kunsthalle Basel, Ourahmane began at home—or at the apartment that fortune finally led her to rent in Oran, Algeria, on her thirty-fourth attempt, shortly after moving there from London in 2018. The colonial-era apartment’s prior resident, a divorced Algerian woman, had died shortly before Ourahmane arrived, but left behind the furnishings of a bourgeois European life exported from the German home she had shared with her ex-husband. To this array of wood-paneled armoires and upholstered dining room chairs Ourahmane added her own books, clothing, and everything else—each day living in parallel and overlapping with the material presence of another woman who had returned to Algeria from Europe alone. All of this was shut behind a newer metal door, installed during the “black decade” of Algeria’s Civil War in the 1990s, during which Ourahmane’s family departed for Spain and the United Kingdom. For her exhibitions, Ourahmane transported the entire contents of this apartment to France and Switzerland (door included), where visitors sifted through all of her belongings, inviting an estranged intimacy as well as wonder at the chance collision of these two lives and what they might represent together, paired across time and now across blankets, couch cushions, and appliances. 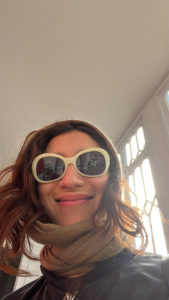 Of course, the idea of fate becomes more complicated under the controlling influence of state power. The labor evident in Ourahmane’s working methods implicitly questions how much of what feels “inevitable” is actually historically, socially, and politically determined. Laws of Confusion, her recent two-person show with collaborator Alex Ayed at the Renaissance Society, Chicago, included a suite of enigmatic objects (a spindly glass sculpture holding water from the Nile, a pair of long, heavy-duty rubber gloves standing upright and reaching toward the ceiling, and others) and installation effects that stood as evidence of a series of frustrated attempts to circumvent various regulatory structures, and, perhaps, to set a liberatory goal for art as a means to live and operate more freely, prying open the cracks in rules, treaties, or borders.

Nailing “above board” to “below board” in order to achieve a fuller investigation of volatile materials, conditions, and histories underpins Ourahmane’s art. Her interest and belief in these official/unofficial ways of working are apparent in works like The Third Choir Archives (2014), catalogued by the artist as 934 “emails, phone calls, proposals, authorizations, applications, [and] customs clearance” that allowed The Third Choir, a work consisting of twenty oil barrels, to travel from Algeria to the United Kingdom. This passage marked the first time an artwork had legally left Algeria since 1962 and instigated an amendment to the country’s export laws. Alongside The Third Choir Archives’ nod to the paperwork and performance of bureaucracy, though, Ourahmane’s methods also constitute a form of independent narrative-building, marshaling chance circumstances into order as parables, sagas, and epics assembled in spite of the overwhelming alienation and distraction of today’s informational sublime. “Today, time lacks a solid structure,” Byung-Chul Han writes in his recent polemic The Disappearance of Rituals. “It is not a house but an erratic stream. It disintegrates into a mere sequence of point-like presences; it rushes off. There is nothing to provide time with any hold. Time that rushes off is not habitable.” Ourahmane’s art houses time in days spent crossing the desert, in notes held for hours, and, of course, in a rented apartment—all stones for the stream.