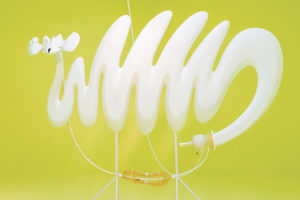 French-born, London-based artist Marguerite Humeau operates within the popular role of the artist as archaeologist in order to excavate and speculate; myth-making, animalism, bioethics, extinction, temporality are all part of the conceptual spectrum that drives Humeau’s practice. As she says: “my research process is for me a bit like a performance: I become a heroine on a quest to resurrect prehistoric creatures, to communicate with alien beings, to revive extinct languages from Cleopatra’s times… like an Indiana Jones in Google times.”1

For Humeau, who started her career at the Design Academy of Eindhoven followed by an MA in Design Interactions at the Royal College of Art, digital technologies and scientific research come together to form a speculative artistic-design practice, which allows her to operate within the realm of potential that is embedded within the speculative act of imagining possible futures.

Humeau’s research is not limited to biological hybridization and its histories, as she is also interested in the ever-expanding forces of globalization, and by extension, cultural homogenization. These issues form the foundation of Édouard Glissant’s writing, which broaches the urgent question of how best to escape the threat of cultural homogenization, and how we can work to sustain the positive force of what he names ‘creolization’ – a plurality of cultures – within the terms of an ongoing global exchange. Global homogenization is a tendency that Stefan Zweig had already observed in 1925 when he wrote in Die Monotonisierung der Welt [Monotonization of the World] that:

“Everything concerning the outer life form becomes homogeneous; everything is evened to a consistent cultural scheme. More and more countries seem to be congruent, people acting and living within one scheme, more and more cities becoming similar in their outer appearance… More and more the aroma of the specific seems to evaporate.”2 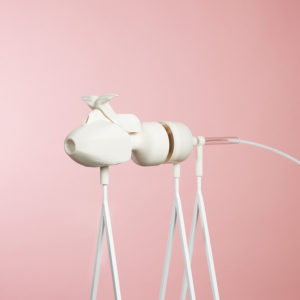 Humeau may be a young artist but her work reaches back to before the dawn of human history itself. In what historian Eric Hobsbawm might have called “a protest against forgetting,” Humeau is also engaged in a project to reconstruct the vocal cords of extinct animals from prehistory – mammoths, dinosaurs and others – as a way to bring the sounds of the past back to life. These acts of remembrance contain a warning of a future potentially lying in wait. Humeau’s work also makes plain the complex technology that enables her research, a strategy that points to our collective dilemma: that is has required immense scientific and technological advances for us to become aware of our plight, technologies that are very often also at the heart of the problem.

In 2014, I invited Humeau to participate in the Serpentine Galleries’ Extinction Marathon: a two-day event where practitioners from a spectrum of disciplines addressed the timely topic of extinction in all of its scientific, artistic and literary ramifications. For her participation, Humeau premiered Cleopatra, A Cappella Love Song:

“A synthetic, unsettling murmur is heard. The shadow is fast, a flash. In the space, an aura emerges. It was inconceivable to accept the possibility of an absence, an eternal extinction. And suddenly, she sings in a non macabre but spectacular pandemonium.” 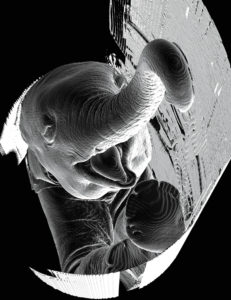 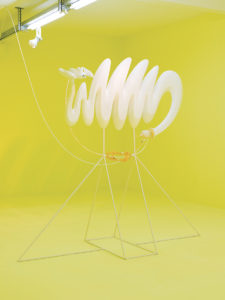 To produce the work, Humeau travelled around the world to find the last translators of each of the nine languages spoken by Cleopatra. She then worked with laboratories of speech synthesis to produce a rendition of this historical figure’s voice. Humeau collaborated with a constellation of different practitioners, including historians, evolution of speech and communication specialists, archaeologists, vocal organs experts, ethnomusicologists, and surgeons. The resulting six-minute film transmits the over-layered sounds of this mythic voice; Humeau’s technique is not to replicate – for this would be a near impossible task – but instead the speculative design that characterises her sculptural forms is similarly applicable to the construction of Cleopatra’s disembodied voice. The film’s music video aesthetic places this figure’s iconic status within a contemporary mode of image production and dissemination, one that traverses historical time, digital spaces and archives.

Humeau’s interest in the voice without a body, and her implicit questioning of the necessity of form within a contemporary landscape of digitised subjectivities, takes us back to Haraway’s idea of the ‘figure.’ In a world of ideal design, de-extinction, and biological engineering, Humeau destabilises the self-sufficiency of the human body as asserted by liberal humanism. Throughout her projects, voices, semiotic codes, genetic linkages, and superfluids are utilised as streams of information technology, sourced and innovated via the atemporal terrain of Google and re-formed into striking representations of a not too distant future. In line with a contemporary impulse to design not only one’s present but also one’s future, Humeau not only shows us what this potentiality may look like, but by reaching into the past she resists the cultural homogenisation and cultural extinction that threatens our future.