in conversation with Vincent Honoré 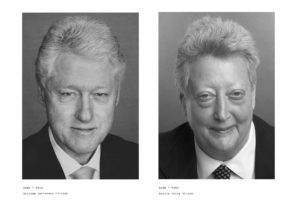 VINCENT HONORÉ: How did you start being an artist? Did you study somewhere?

MARTHA WILSON: I was studying English literature. My mother was Quaker, so I went to a Quaker prep school in my hometown in Pennsylvania, then to a Quaker college in Ohio. I graduated in 1969. The Vietnam war was at its height: my boyfriend didn’t want to be drafted into the army. I got accepted at a university across the street from the art college where he got accepted, so we took it as a sign that we should leave America and move to Canada. We moved to Halifax, Nova Scotia, in 1969 and I started getting a Master’s in English literature: the kids at the art college across the street were a lot cooler so we’d hang out there. At that time, in the early ’70s, conceptual art was the new thing—and it was made of language. I thought hallelujah! The first thing I ever did is a conceptual art work problematizing the use of language to create art. The second piece was called Breast Forms Permutated: it is a grid with flat-chested torsos across the top and full-breasted torsos at the bottom, then conical and pendulous: the perfect set is in the middle of this grid of nine boobs. It was a joke about conceptual artists like Sol LeWitt and Jan Dibbets who were permutating everything but who didn’t connect with the real world. Breasts are limitless in form, you can’t permutate them. When Vito Acconci came to the Nova Scotia College of Art and Design he had just made the work Seedbed using his body and sexuality as legitimate subjects. This opened the door to me to the idea that I could use my body as an instrument, I could talk about what it’s like to be a woman in my work. At that time I was in a hostile environment: I started working on a PhD, but my advisors didn’t accept my thesis. I walked across the street and talked to the President of the art college who invited me to teach English there. So now I’m on the faculty of the art college: I can use the video equipment, I can audit classes, I can be in the project class that David Askevold is running with guest artists like Dan Graham. I got really engaged with the visiting artists program and I began wondering whether I could be an artist. I went to my mentor, my painting teacher, and said “look, I want to be an artist.” He said, “women don’t make it in the art world.” That made me mad: instead of turning me away from the whole idea that I should be an artist, I thought “fuck you.” He also said, “and if you are serious you’re going to make black and white art.” I went to buy a roll of color film and did that drag piece: a woman dressing as a man trying to look like a woman. Later, when my boyfriend dumped me, I had to really think about whether I was an artist. Lucy Lippard came to the college in 1973, she looked at my work and said, “yes, you are an artist and there are other women all over North America and Europe who are doing feminist art.” She gave me the term “feminist”—I didn’t have that term.

I realized I didn’t know who I was, so my performance artworks were experiments to use my personality as a medium and find out what it consisted of. I was a very confused young woman but I think in the end it was a great thing that my boyfriend dumped my ass because then I moved to New York and found a really warm and welcoming community of feminists who were trying to figure out what feminism was and how to make it happen through consciousness-raising groups. A friend, Judy Siegel, introduced me to three different groups so I could pick the one that felt right to me. I started going to Alanna Heiss’ Idea Warehouse where Virginia Piersol was working. The downtown art scene was wonderful!

VH: Did you know people in New York before moving from Canada?

MW: I did through Lucy Lippard’s catalogue c. 7,500. She came to Nova Scotia and said, “I’m going to put you in a show.” The show was one of her number shows. Through that catalogue I met Jacki Apple, Rita Meyers, Alice Aycock and other women artists in New York. Jacki Apple and I did a collaborative performance at the Plaza Hotel before I moved to New York, in December 1973. We invented a character who would exist between us, the ideal feminist, the ideal woman. I had the idea in my head that if I was going be an artist I should try to prove it by being in New York. In 1973 Simone Forti came to the college. She said, “well, if you ever want to move to New York you can crash on me.” So I crashed on Simone for thirty days, and then I moved into Jacki Apple’s husband’s studio. After that I found a roommate and moved to 112 Franklin street. By that point I realized that the art world was missing something: artists were making things in book form but there wasn’t anybody selling it or exhibiting it. So I started Franklin Furnace at the same time that Printed Matter was being formed. Soon after I had moved to New York, Jacki Apple and I made an appointment with Ivan Karp, the director of OK Harris Gallery, to show him my work. He looked at everything and said, “why are you showing me this work? This work is terrible, I would never show it!” It was so traumatic that I just put all the stuff I had done in Halifax under the bed and started to collaborate with my girlfriends. It was the No Wave music scene, everybody was in three bands, but they all knew how to play instruments. My girlfriends and I didn’t know how to play instruments, so we started DISBAND, the “All-girl band of women artists who can’t play the instruments.” We collaborated from ’78 to ’82 after which we disbanded. By 1980 Ronald Reagan had been elected and we were the members to Ronald Reagan’s cabinet. Ilona Granet was James Watts-a-Tree and I was Alexander M. Plague Jr. After DISBAND I did a performance as Alexander, and then one as Ronald Reagan. Afterwards I got started on the First Ladies. I was Nancy Reagan during Reagan’s terms, Barbara Bush when George H.W. Bush and George W. Bush were Presidents, while when Clinton was elected I was the Second Lady, Tipper Gore. I tried to really go into their brains. But when Trump was elected I tried to understand what was in there and I couldn’t find anything. I started to do Donald but as Martha Wilson dressed as Donald Trump, talking about how I’ve seen the cultural scene in the United States changed over the last fifty years.

I became an artist when I figured out I could use the resources that I already possessed, my female perspective and my woman’s body. For me it was a therapy, it helped me become my own person, but at the same time it spoke to the condition of women in general. One of my early works is called A Portfolio of Models: it consists of six models that women can occupy, Goddess, Housewife, Working Girl, Professional, Earth Mother or Lesbian. My son’s girlfriend looked at the work and said, “it’s still like that.” 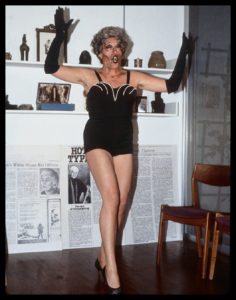 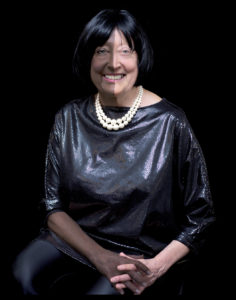 VH: Is it depressing for you?

MW: Well, the reality of women’s condition hasn’t really changed that much. There are still five CEOs in the whole world that are women, a lower percentage of faculties at colleges, and women are paid less. Why is it that we can’t gain equality? Feminism has had a hugely positive influence, although politically things have not changed that much.

VH: Yet, what is interesting is that feminism has used subjectivity to create art. You said you were a confused girl but it seems that everything appeared very quickly: in three or four years you had a lot of your vocabulary in place and you were also opening an art space in New York.

MW: Michèle Didier wants to publish my journals between 1965 and 1981 to look at those moments where I was deciding to become an artist and to form a space. Writing remains the tool that I use to frame my thoughts. I think that my work is concept driven, it comes from the ’70s.

VH: Tell me about your piece I have become my own worst fear.

MW: It started as a videotape in 1974. I look at the camera and I explain this is the best I can do with makeup, this is as good as I can look. Then I take a black grease pencil and a white grease pencil and I start to deform my face. At the very end I’m looking at the camera and saying, “That’s pretty ugly.” I have become my own worst fear looks just like the last frame. That’s what I look like now. I’m having fun being old and ugly instead of being worried about it.

VH: Are you working on some new pieces now?

MW: Yes. It starts with language, I haven’t done it yet. I’m seeing it as a diptych: in “Seen in another light,” I’m going to light my face with the flashlight; the other image is “She has a dark side,” with the flashlight behind my head. It’s going to be very dark, about death.

VH: It starts with language and it ends with Photoshop?

MW: Yes, it does. It ends with Photoshop and collaboration with other people. One of the works in the show at Michèle Didier is called Makeover: Melania: it’s a 60-second video, it starts as Martha Wilson’s face which turns into Melania Trump’s, then back into Martha and back into Melania. I worked with my friend Nancy Burson, who’s an artist and a software designer.

VH: I cannot wait to see that piece! Is politics personal?

MW: That’s a good question. It is personal because you are calculating how their politics is going to relate to your existence. Everybody votes to have their lives made better.

MW: Is art political or is it a toy for the rich? That’s a really good question. For me art is therapy, I still do it to get ideas to live outside my body. But it makes me happy when they become commercially salable and somebody else wants to buy it. I don’t know the answer to your question, it’s too hard, art has always been at the pleasure of people who can afford it, the nobility, the rich, the Pope, and it’s still true.

MARTHA WILSON (b. 1947, Newtown, PA, USA) lives and works in New York. Since the early 1970s, Wilson has created conceptually based performances, videos, and photo/text compositions that grapple with constructions and manifestations of feminism, identity, and the way we construct and present ourselves. She is the Founding Director of Franklin Furnace Archive, Inc. In 2008, she had her first solo exhibition in New York at Mitchell Algus Gallery, Martha Wilson: Photo/Text Works, 1971-74. She had solo exhibitions at P.P.O.W Gallery in 2011 (I have become my own worst fear) and 2015 (Mona/Marcel/Marge). The solo exhibition The Two Halves of Martha Wilson’s Brain at Kunstraum Niederosterreich opened in June of 2018 and Martha Wilson: Staging the Journals opened at mfc – michele didier in September of 2018.

VINCENT HONORÉ is Senior Curator of the Hayward Gallery and Artistic Director of the Baltic Triennial 13.