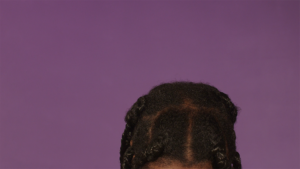 Martine Syms: conceptual entrepreneur. The tagline for Syms’ (b. 1988) website gives some idea of the multiplicity of this Los Angeles-born and based artist’s output. Since she graduated in 2007 with a BFA in Film, Video and New Media from The School of the Art Institute of Chicago, Syms has co-directed the project space and bookstore Golden Age, designed a website for fashion retailer Nasty Gal, devised a branding strategy for the nonprofit organization Summer Forum for Inquiry + Exchange and founded Dominica publishing, an imprint “dedicated to exploring blackness as a topic, reference, and marker, and audience in visual culture.”

In demand and, clearly, prolific, Syms’ rise has been nothing short of meteoric. In the last two years, she has been included in Manifesta 11, Made in L.A.: a, the, though, only at the Hammer Museum, the New Museum’s 2015 Triennial: Surround Audience, has been represented by Bridget Donahue, the much admired New York gallery, and had a solo exhibition at the Institute of Contemporary Arts in London. This year, Syms will have a solo exhibition at the Museum of Modern Art in New York, for which she is producing her first feature length film Incense, Sweaters, and Ice. Not bad going for an artist still shy of 30. But why exactly has Syms achieved such stratospheric success so early on in her career? 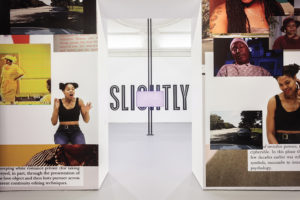 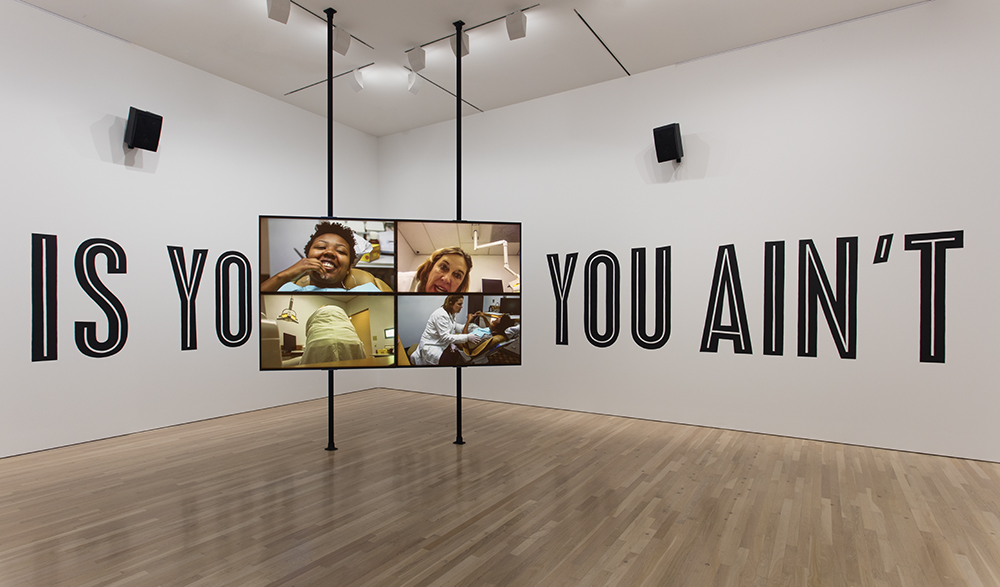 One of Syms’ principal concerns is with the ways in which black subjectivity is mediated in popular culture. Her work draws on Alison Landsberg’s theory of ‘prosthetic memory,’ asserting that mass media produces a collective memory which has a lasting and meaningful impact on public consciousness and identity.(1) Syms focuses in particular on the appropriation and depiction of blackness on television, in movies and online. The misconceptions that often arise from these stereotypes help perpetuate the ignorance, fear and plain old racism that proliferate in the ‘real’ world, and have surely contributed to the circumstances in which someone like Donald Trump can become leader of the United States—a man who appears to believe that all black people are on speaking terms with one another.(2)

Syms’ interrogation of these cultural norms feels especially pertinent, given the recent awakening to racial inequity in mainstream American media: from Ta-Nehisi Coates’ incendiary articles on reparations for The Atlantic to the prominence of the Black Lives Matter movement on the streets and playing fields of the country. Fact & Trouble at the ICA reflected on the gap between public perceptions of blackness and lived experience. Here Syms created an immersive installation of images of black men, women and children which were culled home movies, online GIFs, advertisements, YouTube videos and surveillance footage. While Syms’ work is timely, she does not respond directly to news events in an overtly political manner, instead pursuing a more subtle and nuanced investigation, one which is as likely to draw on queer theory and the writings of black intellectuals as cartoons and television footage. 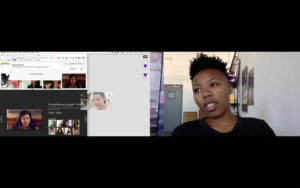 The flexible and responsive way in which Syms works—creating installations and photographs, publishing books, shooting films and presenting lectures—is also particularly suited to this moment. Syms makes online work in the hope that a more diverse audience can access these subjects—not only the rarified demographic of gallery-goers. While some of these early projects have a one-liner, throwaway feel—listing all of the things she’d ever googled for Everything I’ve Ever Wanted To Know or recreating a Geocities website in Black Culture in America—in recent years, Syms’ practice has become ever more sophisticated and ambitious, dense and complex.

Littered with the tools of broadcast media—light stands, color filters, video stills, screens and cue cards—Syms’ work suggests the potential to capture, frame and represent potential subjects. Videos like She Mad: Laughing Gas employ sophisticated production techniques, co-opting the tropes of the sitcom, including speedy plotting, close-ups and a Brady Bunch-style four-way split-screen. This dizzying, highly entertaining video is positioned as a single episode of a fictive television sitcom called She Mad, in which the central character also goes by the name of Martine Syms. She can be seen making a tragicomic visit to the dentist, undergoing anesthesia before the dentist realizes that the patient’s insurance will not cover the procedure and sends her on her way. Disorienting excerpts from America’s Next Top Model, The Wire and The Fresh Prince of Bel-Air are intercut with footage of Syms, drugged to the hilt, navigating the Los Angeles public transit system before finally making it home and collapsing on her sofa.

She Mad: Laughing Gas not only explores how the circulation of particular images can make beliefs visible (and entrench them), it also generates an alternative by representing people of color in ways previously deemed unconventional. In A Pilot for Nowhere, Syms—in voiceover—makes clear that she wants to broadcast a version of the world that is not currently available onscreen: her L.A., with its subway entrances, clogged freeways and Koreatown bars, its colorful and diverse characters. In the video essay Mundane Afrofuturist Manifesto (2013), Syms proclaims her stance on the production of black identity, explaining that she is interested in changing the discourse of the world around us, not in trying to escape to build an alternative reality. The new representations that she introduces embrace the multiplicity, variability and specificity of individual experience, attempting to disseminate a new value system, one that speaks to a broad audience and has the capacity to change the world.(3) In her work, Syms outlines nothing less than a new framework for future cultural production, something we could all use in these divided times.

The British historian Mary Beard touched on this subject in a recent talk about the ways in which women in power are described in mainstream media. One newspaper headline quoted by Beard described the ‘power grab’ that women were making as they were appointed to prominent roles, from Head of BBC to the Bishop of London, as if this were a coordinated invasion, rather than the ascendance of qualified people to appropriate positions. She noted how such references serve to further entrench the idea that ambitious women are unnatural.

This brings to mind a recent survey of audiences and film casts by Darnell Hunt, Director of the Ralph J. Bunche Center for African American Studies and Professor of Sociology at UCLA. This found that diversity in film and television results in higher ratings and, ultimately, more revenue. The recent critical and commercial success of shows like Atlanta and Insecure, or the Oscar-winning sensation Moonlight, bears this out.