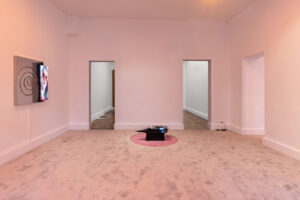 Through his use of assemblage, Mathis Altmann incorporates an unlimited range of materials and objects from the world we live in and reject. His work is characterized by a strongly sociopolitical consciousness and satire: each piece subverts historical connotations of labor and leisure, promote non-linear intimacies between materials to question binary conceptions of modernity and tech. Formally, he uses coalescence of various elements, merging the heterogeneity of bodies to sculpt an absurd relationship of contradictory notions that cross us.

Corporate languages, gentrification, real-estate, merit, accomplishment, progress as guiding values of capitalism are at the heart of the artist’s reflections. For his show Total Distress in Fitzpatrick Gallery in Paris, the artist has conceived an installation of 12 works, revealing a sensual yet critical retaliation against the promises of capitalism. Total Distress, which can refer to both mental conditions and need for help – but with a very fashionable and romantic name from 90s punk band – sounds like a fake entertainment to the world we live in.

At the very core of the show, an LED pharmacy cross sculpture programmed a unique loop of moving images is slowly rotating. From usual pharmacy crosses spreading pharmaceutical animations, Altmann glitches their content to broadcast data of our ability to exist, our self-evaluation or sometimes – even funnier – the Google rate of galleries. In this new work Mental Powerlifestyles (2022), Altmann inserts a text inspired by a sponsored Instagram advertising for a narcissistic personality disorder test, scrolling like cut up poetry lines, it invites the audience to meditate on their own engagement to the world: “You like to be the center of attention”.

Through this series, Altmann draws from history the roots of Protestantism and the relationship of man to work, uses the medical cross as powerful reference to consider strategies of remedy and an escape from the cult of work. In his famous essay The Protestant Ethic and the Spirit of Capitalism, Max Weber asserted that Protestant ethics and values enabled the rise and spread of capitalism, creating a genuine cult of work value as a mean to save us. But if Weber relies on the Calvinist doctrines of asceticism and predestination to develop his theory, it seems the values of our contemporary time have shifted. In the rise of meritocracy as a leitmotiv, millennials are constantly looking to improve themselves, driven only by the notions of progress and self-accomplishment. In this zeitgeist of capitalist performance, pharmacy cross embodies our absurd relation to improvement: drug consumption (whether legal or not) have become banal, either to escape reality pressure, to increase our abilities or to prevent depression, considering the double bind of the Pharmakon as being the remedy as well as the poison itself. And because this generation is so aware of the “Rise and Grind” expectation from society and the reification of their bodies, considered as a new currency, the pharmacy cross has even become a trend on Tiktok, associated with techno rave music, their animation become even more absurd on our duty and ability to produce.

Altmann has long observed these mutations, with a great distance, creating oxymoron poems in a sculptural form, like mirrors reflecting our society of contradictions. In Total Distress (2022) a mirror polished stainless steel shimmering surface is partially covered with distressed cargo pants, filled with anarchist crests, slogans, and “I Love Berlin” souvenirs keychains – it could eventually belong to an old punk as well as a Zoomer kid surfing on subculture aesthetics. This powerful assemblage of clothing, symbol of counterculture melted with touristic goodies functions as a relic of a bygone era, that of Berlin as a hub of resistance that existed for decades, hidden by a new globalized city where Y2K kids would buy cargo pants from thrift shop as a trend, to embody a new simulation of coolness, where Berlin has become an entertainment of non-initiated.  Same goes for Pathetic Fist (2022), where latex is no longer associated with Fetish practices but a must wear of Fashion Industry. In each of Altmann ’sculptures, elements of counterculture neighbor items of mass industry (an Ikea Alvar Aalto seat replica, some Muji pills boxes) to emphasize the contradiction of nowadays values. In Basic Intoxication (2022), the artist assembles Muji pills boxes filled with magic mushrooms, a wooden charcuterie board engraved with extraterrestrial figure and a branch of a tree decorated by fake birds. These associations of contradictory notions highlight how detoxifying has become sort of a necessity, and how it has also been absorbed by capitalist strategies – a whole generation is longing for new spiritual ways of beings and transcendence experimentation while tech world has muted this desire in trendy way of consumption: hunting for well-being, existing in nature, closer to so-called roots, or even, find an encounter with aliens. The work Wired and stoned (2022), stages a dreadlocks spiral out of blonde human hair, while an LED screen broadcasts generic faces of anonymous white people, great emblem of a generation stuck in between cultural appropriation and search for alternative ways to survive.

Altmann has also developed a deep critique of gentrification process and real-estate power. In the past 3 years, he has been working on sculptures as absurd aberrations of the branding strategies of a global co-working company (Wewontwork, 2021). With the illusion of creating a community of self-made creative-digital workers, running on nothing but utopist idea of community, co-working Companies revealed nothing but an emblem of the millennial hustle culture, designed almost like a McDonald’s sign of new conception of labor, where so-called self-realization has turned into a capitalistic self-exploitation and real-estate investments made with steroids effect, where even precariousness is transformed into opportunity.

The exhibition itself presents a psychological distress shrouded in a global atmosphere of domestic softness: beige carpet on the floor, velours pink on some walls, warm Californian sunset orange light spreading all over the rooms and a soft sample – assemblage again – of smooth and sensual sounds, as if we were in the waiting room of our existences. As a poet more than a sculptor, Altmann merges oxymoron symbolic objects to recreate a branding contradiction, formally seductive and truly harrowing. In the artist’s vision, where success and failure are superimposed, he challenges the audience to be astonished at humanity’s failure to lend a helping hand, the tenderness of ego, and our fear of having to rely on ourselves. His assemblage skills are tethered to grandiose satirical intentions to question both the sustainability of a spectacularly in-egalitarian society and the hypocrisies of those who profess to offer solutions. With a genuine refreshingly audacious punk stance, using codes of millennials culture and neoliberal mass industry, Altmann addresses a silent critic to abundance, consumption, functionality and superficiality. 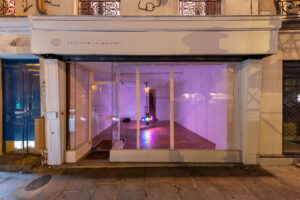 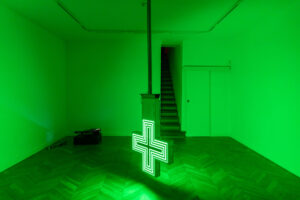 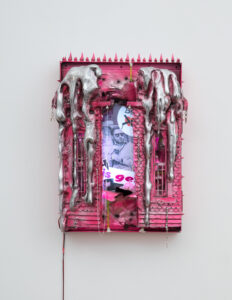 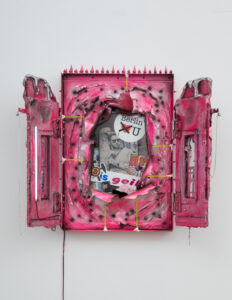 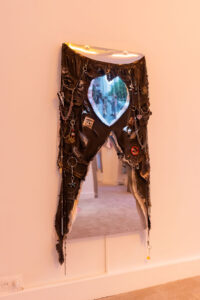 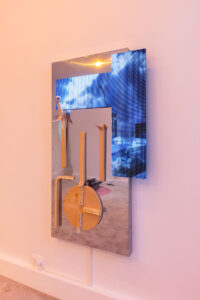 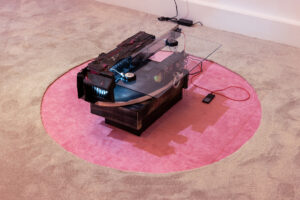 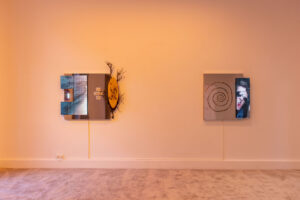 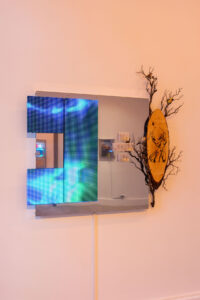 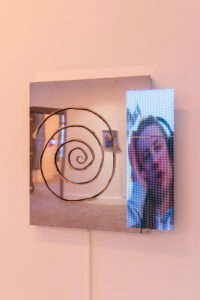 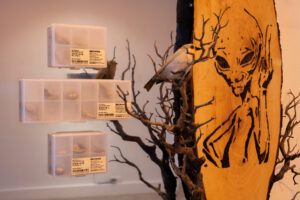 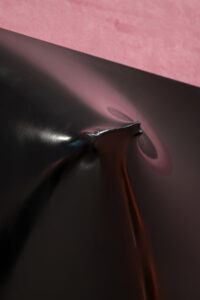