“I became a fabulous opera: I saw that all beings are fated for happiness: activity is not life, but a way of wasting strength, an enervation. Morality is a weakness of the brain. To every being, I felt, several other lives seemed due. This gentleman knows not what he does, he’s an angel.” - Arthur Rimbaud, A Season in Hell (1873)

Here, in the building where Georges Bizet wrote his masterpiece Carmen in 1875, Matt Copson premieres a bildungsroman opera in three laser-projected parts: Age of Coming, Coming of Age and Of Coming Age. His opera tells the story of a baby at odds with a vengeful god, who tries to convince him that life is miserable and cruel, and nothing more. It’s not a good thing, however, to be too aware of everything wrong in the world, to be told every day there’s no future, and the baby rebels, and seeks to overturn this authority figure; to kill god, and become a creator himself.

Striking a series of life-model poses, he reenacts a brief history of art and in so doing reasserts its power and beauty. The baby also creates new forms of his own. Using his magic pencil, he draws a living self-portrait, with whom he duets; he sings aloud his existential quandaries as arias, written by Copson with music by Caroline Polachek, and performed by a boy soprano.

The newborn gives birth to himself, pulling a pair of malformed twins from his ribcage. He removes his own heart, he transcends, explodes like a supernova. 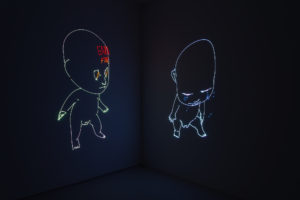 The baby becomes an opera, a bright fireworks show on Rue Fromentin, where glittering, visceral phantasmagoria decorate the walls. High Art is transformed into a total theater. The show might have been canceled. The show must go on. One has to be hopeful, be different, believe. The day Coming of Age opens there will be, according to the newspaper I read each morning, four days left to save the Earth. It is possible to have too much of a bad thing. Too much doom-mongering comes from a particularly narcissistic society convinced of its position at the end of history. A problem with being very hysterical about everything, with a picture of a world that is always in flames, is that in the end, it’s morally deadening, and nihilistic. If everything is doomed, nothing is doomed. You mustn’t despair excessively. The devil comes to feast on you when you are vulnerable. Here is some joy for the winter. To be born is a one in 400 trillion chance. Here is some music, a song and a dance. Some splashes of laser, some dazzle and abstract effects. A little hope. A show to take you higher. Here are the angels in the painted sky; here are the soaring arias, the rays of light. 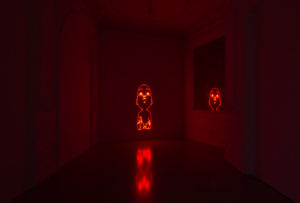 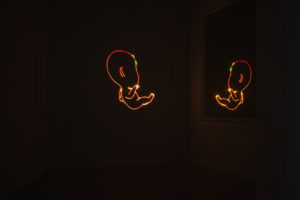