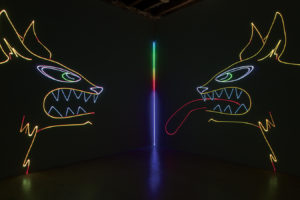 Of these, ATU 1-69 are sub-categorized under the heading “The Clever Fox (or Other Animal),” and feature stories of cunning, trickery, and intellect, identified with a vulpine spirit. To take just one example, ATU 1, found in Scottish, Sámi, African American, Palestinian and Indian cultures among others, is a tale-type describing wily fox’s technique for stealing fish. Broadly, a hunter or merchant with a cart of freshly caught seafood is fooled by a fox who lies in the road pretending to be dead (and thereby suggesting the luxuriant fur on its dead body as a bonus prize). Once he has been thrown in with the goods in the back, the fox eats all the fish, then quietly slinks away with a full belly. I mention the ‘sly fox’ category, because the fox is the only animal that merits enough folk tales across the globe, to merit a whole typology, suggesting a particular fascination in oral and folk tradition with this creature and its way of being in the world. (1) Though usually characterized as sly, the fox is also shifty and strange, quick-witted and intelligent. Part of his appeal is that he is a slippery, difficult to catch by the tail.

The fox is one member of an animated ‘bestiary’ that has appeared in the work of artist Matt Copson over the past few years. The British-born artist, who has recently relocated to Los Angeles, has cast one of the sly fox’s most celebrated incarnations, Reynard, as a kind of archetypal stock character in his animations and sculptures. This incarnation of the clever fox is from French Lorraine folk tradition, recorded in writing around the 12th century. Yet the Reynard of Copson’s work does not replicate those stories, but rather resembles an ancient spirit finally able to speak in his own full-throated voice, instead of in ventriloquizing the morality tales of humankind. In a painted wall mural of the fox, which Copson animated using projections and sound, and entitled Reynard with a Vengeance (2013), the fox speaks the words of an annihilator. Like a fascist Looney Tune from hell, he growls that he is here to indiscriminately destroy every group of society that he can name: “THIS IS THE REAL DEAL, FOLKS.” In a later work, Copson’s hand-drawn animation entitled Sob Story (2016), Reynard’s head rotates on a spit over a fire in a cave, his tongue lolling and flipping as his head turns. Another modified voice, this one crackling and disassembling into cosmic bleeps, emanates from Reynard’s supernatural skull: a spirit voice that is both a whisper and an ancient, malevolent growl. “Immortality puts a real SPIN on things,” the severed head notes, drily. “Ice Age. Big Band. Relapse. Reprise.” Reynard is, in other words, a trickster from the depths of time, both a god and a demon, and as much an animating force as he is an animate, animal body. 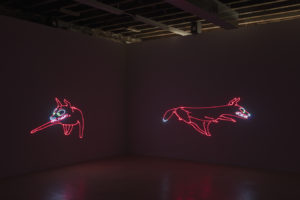 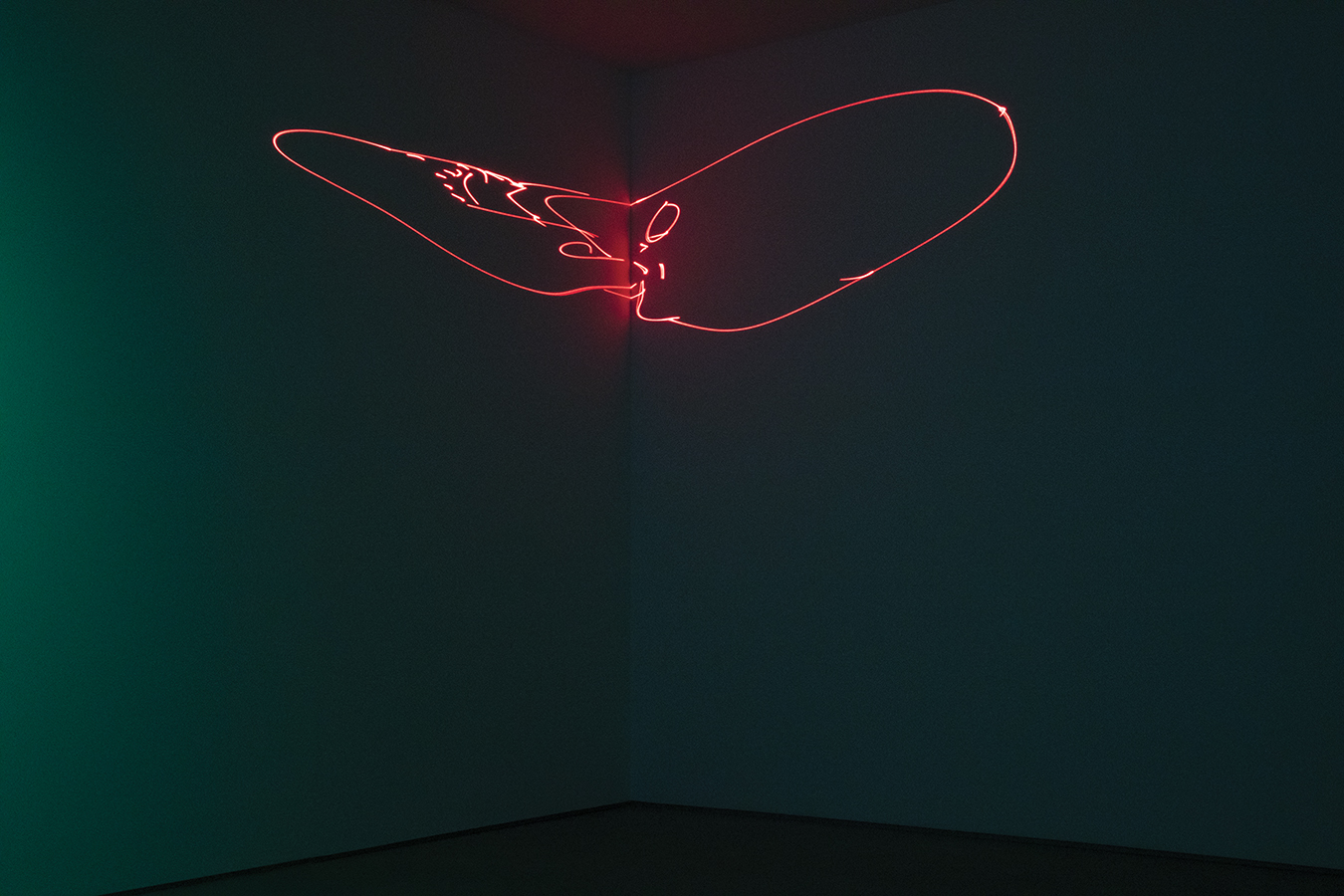 It is animation itself, and the creation of a lively presence within a gallery space that drew Copson to using laser animation technology, which he has employed in recent work to depict the archetypal animalia such as Reynard. “I was interested in using the gallery as a theatrical space, and the attempt to create a living character that creates a response,” Copson noted as we spoke over the phone recently. “It allows me to think about characters and creating a story worth telling. I believe that narratives are all we have artistically as forms of escape and resistance, and it is simply about how we reconfigure them.” Down Boy (2019), at Reena Spaulings Fine Arts, is a laser animation featuring a fox, that was projected into the corner of the room, appearing to interact with its mirror image. In the darkened gallery space, a thin vertical line of glowing multicolored light appeared like a zip in the velvety blackness, before a red fox head and its reflection peered out at opposite sides, and padded into the space. Faced with the prospect of his double in the mirror, the fox licked his own tongue, attacked himself, and then settled down to masturbate to his own image. All the while, Copson’s voice emanated (“Down boy. Good boy. Bad boy. Fuck boy. Who’s a pretty boy? I’m a pretty boy.”) before contemptuously spitting out the wisdom of the immortals: 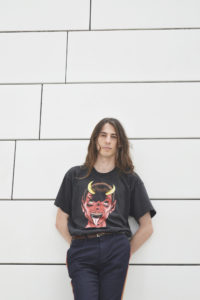 Another series of animations featuring a bird, entitled Blorange (2018), and recently shown on the roof of Swiss Institute in New York, similarly sets another archetypal character into freestyling motion. A bird is cooked on a spit, it flies away, it keeps travelling and never arriving. Rather than a slippery intelligence like the fox, the bird is mythologically cast as an archetypal messenger. Duplicated across time and space, and without a particular message, the bird begins to appear as an empty vessel, plotted on narrative or ideological vectors across time and space. Death Again (2019), a recent laser animation of a skull with flies flying out of its mouth, recalls the animation techniques used in Renaissance painting, in particular Hans Holbein the Younger’s The Ambassadors (1533), which famously includes an anamorphic skull that appears when the body of the viewer is placed at the correct angle to it. 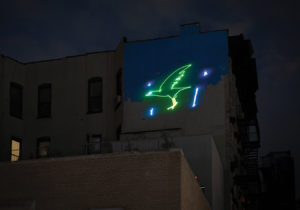 The sheer power of laser light itself is part of what gives Copson’s laser animations such disturbing vitality. A surprisingly mechanical, analogue technology, the lasers used in Copson’s vector-based animations are created using powerful beams of light reflected by mirrors moving tens of thousands of times a second. It was when watching footage of one of Pink Floyd’s Dark Side of the Moon concerts, that Copson noted how the stadium rock-scale laser animations that the band were using rendered the entire space around them into a void. The impossibly sharp light of lasers, which literally cut through the darkness like so many knives, are powerful enough to command our attention from miles away, and when the figure made of such sheer brightness addresses us, it is as though they communicate a message from a different plane. In modeling that contrast of light and dark to create archetypal animated animalia, Copson has identified the contemporary moment’s perceived darkness, and within it a groping search for ghosts, universal truths, faith and spirits. His animations allow us the brief sensation of meeting a form of liveliness that has a longer duration than brief human lives: the supernatural, the ancient spirits, the gods, cut through time and space to shatter the dark.

LAURA MCLEAN-FERRIS is Chief Curator at the Swiss Institute, New York. She is also a writer who regularly contributes to a variety of publications including Artforum, Frieze, and Art-Agenda, and she has authored numerous catalogue essays. She was the recipient of the 2015 Creative Capital | Andy Warhol Foundation Arts Writers Grant, and her short-form collection The Lacustrine was published in 2016.